The overwhelming idea in society is that the PKK is using the HDP for recruitment, propaganda and logistical support purposes, and it even uses HDP-ruled municipalities as its safe havens. 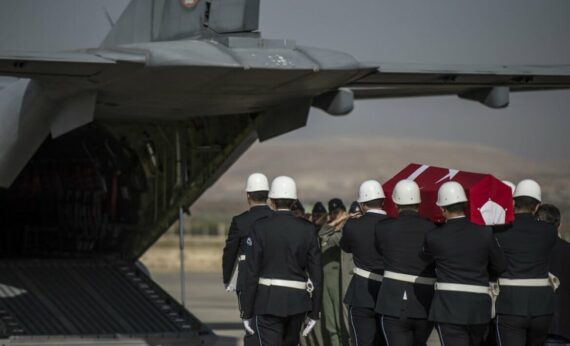 Turkey is facing another round of escalation of terrorism and hardening counter-terrorism policy in its struggle against the PKK. Turkey’s hardening security policy has recently reached the HDP, by putting it on the spot with detentions and arrests of 11 HDP MPs and numerous mayors. These detentions and arrests seem to be embraced not only by the ruling AK Party, but also by the MHP, both in terms of their party organizations and popular bases. The CHP’s party leadership is critical of the arrests, yet the party’s popular base seems to be divided on this issue. Nevertheless, the CHP leadership’s critiques, HDP’s own objections, and international objections from the West seem to be far from having the prospect to change the government’s security-first oriented approach towards the PKK and HDP alike.

Middle EastBy Silan Cecen
Western critiques and objections from certain domestic circles are doomed to be ineffective against the current hardening security policy and widespread domestic support for such policies. In order to trace this situation, one needs to go back to the PKK’s turn to violence in the Summer of 2015.This most recent round of the terrorism-counterterrorism cycle started as the PKK announced the end of its 16 month-long ceasefire on 11 July 2015, citing the construction of new dams and military outposts in southeast Turkey as its reason. A few days after the announcement, Bese Hozat, co-chair of the KCK (which is the umbrella term that PKK calls itself now) declared “a people’s revolutionary war” on July 15th, and was soon joined by his co-chair Cemil Bayık. On July 19th, Bayık ordered the PKK mass base in southeastern Turkey to arm themselves, erect barricades, and dig tunnels and ditches for the revolutionary war.

The battle started as the PKK murdered two policemen while they were sleeping in their homes in Ceylanpınar, Şanlıurfa on July 22nd. What followed was the Turkish state’s restarting of military and police operations against the PKK. As the PKK put its urban warfare in action in towns under the rule of HDP mayors, municipal vehicles were used by the PKK to dig trenches in roads and plant bombs. As a reaction to the PKK’s urban warfare (which was a real war by the way, as the PKK started it with mines, bombs, and RPGs, and Turkey responded first with police teams and then with military operations including the use of tanks), Turkish security forces declared curfews in combat zones and detained HDP mayors in those towns. This marked the starting point of the HDP detentions.

What followed was the replacement of those mayors with centrally appointed trustees (kayyum) and the spread of these replacements to many other HDP municipalities. As a reaction to the trustee appointments, the PKK declared that they will target trustees as well as the AK Party’s local politicians in the region. And it did. The PKK murdered Naci Adıyaman, the youth branch district chairman of the AK Party in Şırnak, and Ahmet Budak, the AK Party’s Hakkari candidate in the November 2015 parliamentary elections. The PKK continued its attacks against the AK Party politicians in October 2016 with three murders: Aydın Muştu, AK Party’s Van, Özalp district deputy vice chairman, Deryan Aktert, AK Party’s Diyarbakır, Dicle district chairman, and Mehmet Şefik Doğu, the assembly member appointed by the trustee at Erciş Municipality. Besides those murders, the PKK has also detonated bombs in AK Party headquarters and trustee appointed municipal buildings in the region.

Along with the ongoing military operations against the PKK, the HDP co-leaders Selahattin Demirtaş, Figen Yüksekdağ and nine other parliamentary deputies were arrested as another stage of Turkey’s war on terror.

Once we see this flow of events starting from last summer in one piece, then what comes next is to analyze the reasoning of the related actors: Why did the PKK murder AK Party politicians, and why were the HDP mayors and MPs arrested?

The PKK’s reasoning is simple as usual. They started a “revolutionary urban warfare” that was supposed to defeat Turkey, “liberate” those towns from Turkey and establish its de facto autonomy in the region. As the PKK failed to take HDP-ruled municipalities directly under its sole control, it even lost its indirect rule in those towns after the detentions of HDP mayors and trustee appointments. The only way for the PKK to claim that it is still controlling the region was to kill unarmed AK Party politicians, which it did. The message was, “if my politicians cannot rule, yours cannot either!” Nevertheless, what the PKK fails to see is the AK Party government has new priorities now. The PKK’s decision to return to its terror attacks after the so-called Reconciliation Process (Çözüm Süreci) closed the negotiation door for an unforeseeable time. And there is now no domestic or international factor that can change the AK Party’s decision to restart a security-first oriented approach to the problem.

The AK Party already had some internal dissent in its mass base against negotiating with the PKK during the Reconciliation Process. And now there seems to be no single trace of pressure from the party’s popular base to return to the negotiations after the PKK reinitiated violence. The MHP’s popular base almost entirely, and the CHP’s popular base in a significant degree, seem to embrace the military struggle against the PKK’s terror. With such a composition, the AK Party’s current counter-terrorism struggle has a wide range of support in society according to the leading survey companies in Turkey such as GENAR, ANDY-AR and A&G. The negotiations with the PKK ended with its turn to violence. The PKK took the HDP’s electoral success as direct support for itself and hijacked the HDP votes with its urban warfare in places where HDP rules. The overwhelming idea in society is that the PKK is using the HDP for recruitment, propaganda and logistical support purposes, and it even uses HDP-ruled municipalities as its safe havens. The government’s solution to this problem now seems to be breaking this logistical link between the HDP and PKK by arresting the HDP mayors in those municipalities as well as the HDP’s leadership with no significant domestic objection to that in the AK Party’s, MHP’s, and, to some extent even CHP’s mass bases.

While there is no strong domestic objection to the detainment of the HDP politicians, international pressure seems to be ineffective as well. Especially after Western reactions to the coup attempt on 15 July, 2016 and the American military support for the PKK’s partner organization PYD in Syria, on top of the never-ending accession process with the EU, both the EU and the United States lost their leverage on Turkey. Hence, the American and European critiques will not change the AK Party government’s decision to fight against the PKK on all fronts, including both its military and political wings. There seems to be no reason for AK Party politicians to change their mind.

The loud objections from the US and EU fall on deaf ears in Turkey, as the AK Party no longer considers them credible partners. Turkey’s current security-first orientation and the jailing of HDP politicians may not end the PKK terror for once and for all, but with the given parameters, there seems to be no factor to persuade the government to change its approach towards the PKK and the HDP.