Three State Elections That Could Shake Up German Politics

In the upcoming months, elections of three federal state parliaments will be held in Germany. The elections in Brandenburg, Saxony and Thuringia will not only have implications at the federal state level but also on a national level. 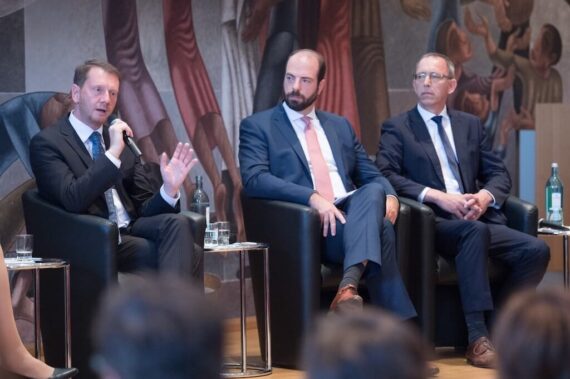 Top candidates before Saxony state elections 13 August 2019, Saxony, Dresden: Michael Kretschmer (CDU, l), Prime Minister of Saxony, speaks during a panel discussion on economic policy topics in the ballroom of the Dreikönigskirche next to Andreas von Bismarck (M), Economy for a cosmopolitan Saxony, and Jörg Urban, Chairman of the AfD in Saxony. The associations Wirtschaft für ein weltoffenes Sachsen and Silicon Saxony have invited to the discourse on the occasion of the upcoming state elections. Getty Images

The importance of these elections are based on two fundamental points. First, the party or parties that receive the majority of votes will subsequently establish government which will govern the federal state for the next five years. Secondly, voters in each federal state also indirectly determine who will have a seat at the Bundesrat of Germany, the legislative body representing Germany’s sixteen states at the national level.

The new government of a state appoints members to the Bundesrat that will represent their state. The emergence of a new majority in the Bundesrat, which may oppose the federal government, might cause future challenges for the continuation of the current federal coalition government consisting of the CDU/CSU and SPD. This is based on the fact that legislative decisions of the Bundestag, Germany’s federal parliament, must also require approval from the Bundesrat. A function akin to the role of an upper house of parliament such as the House of Lords in the UK or the US Senate. Therefore, where there are opposing political parties representing each body, the process of consent can be frustrated limiting the legislative capacity of a governing party. This was the case in 2005, when the SPD-Greens federal coalition government called for early federal elections after it lost some state elections.

Germany will face a turbulent autumn during which the continuation of the current federal government will be tested.

Despite these possible political implications, more alarming problems might be faced in the near future. The likelihood that for the first time in German history since the end of the second world war, a far-right party may become the strongest party in a state and even form part of a government. Even though most moderate voices do not believe in this possibility, polls indicate differently. For example, recent polls on Saxony note that the far-right Alternative for Germany (AfD) party, represented in the Saxon state parliament since 2014, is currently receiving the most votes in the poll with 23 percent. This means that a far-right group are the strongest party in the most eastern part of Germany. On the other hand, the current coalition government in Saxony consisting of the Christian Democrats (CDU) and the Social Democrats (SPD)  received  only a combined total of 33 percent of the votes (CDU: 22 percent, SPD: 11 percent). An amount which will not be enough for the continuation of the current coalition government. According to the same polls, other parties in Saxony such as the Left Party received 14 percent while the Greens 11 percent.

The only good news –at the moment– are statements of the Christian Democrats who have ruled out the possibility of establishing a potential new coalition or cooperation with the far-right AfD. This leads to the likelihood that a potential CDU-led coalition government might consist of one, two or even three other coalition parties after election day.

There are clear differences between projected votes on a state and federal level. According to similar recent federal polls for instance, the CDU/CSU received 27 percent of the votes, while the AfD received only 12 percent. In addition, Germany’s second strongest party, the Greens’ achieve an average of 25 percent of votes at the national level, while the SPD receives 13 percent.

Whether a very weak government coalition in Germany’s three federal states will be established or a far-right party will win the elections is a question of great importance.

The ongoing election campaigns in Brandenburg, Saxony and Thuringia will also be shaped by developments at the federal level. For instance, discussion about the SPD’s potential new chairperson(s) which will be determined in October, how the federal government will continue its agenda and whether the alienation of German voters away from center parties will continue with the ongoing manipulative moves by far-rightist AfD politicians.

As demonstrated for instance, in a recent study which found that AfD members systematically overinflated the actual numbers of foreigners who were accused of crimes in Germany. Other developments do not seem very promising. A former and controversial high-ranking bureaucrat, who has received harsh criticism from center parties for statements and positions have resembled those of AfD politicians is now rumored to be a future interior minister within the ranks of the CDU in Saxony.

Germany will face a turbulent autumn during which the continuation of the current federal government will be tested. Whether a very weak government coalition in Germany’s three federal states will be established or a far-right party will win the elections is a question of great importance. Unfortunately, the rise of right-wing parties is a significant development that may seriously affect the current constellation of German politics in the long-run.