There are three ways to improve security in Afrin: The cleansing of Tel Rifaat, a strong Turkish footprint model and the formation of a hierarchic governance model. 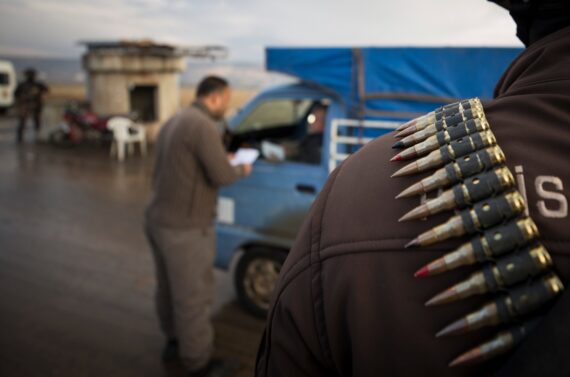 The Afrin region in Syria was liberated by the Turkish Armed Forces and the Syrian National Army during Operation Olive Branch. Since then, the security of the region has been a main topic. Based on a dataset of two months of YPG attacks, I wrote earlier how the YPG is trying to sabotage security and how the YPG propaganda machine defends these terrorist attacks. Bellingcat published a report about the insurgency of the YPG in Afrin. The YPG has explicitly tried to undermine efforts to increase security as a strategy, but security is also undermined by crimes of Syrian National Army fighters and as a result of mass migration towards Afrin due to the forced displacement by the Assad regime of residents living in Ghouta, Homs, Hama and Deraa. While security in Afrin is better than in Deir Ezzor, Raqqa, Idlib, or Deraa, especially after the ‘Peace Operation’ targeting criminal gangs, it is very important to improve the security of the region for the sake of the people. This column will discuss some possible ways of improving security in Afrin.

One of the main sources of the relative insecurity in Afrin is Tel Rifaat. The YPG is using the area protected by the Russians and the Assad regime in order to infiltrate Afrin, conduct terrorist attacks and intimidate locals cooperating with the Turkish authorities. As long as Tel Rifaat remains a safe-haven for the YPG, the security in Afrin will always be threatened. Turkey needs to find a way to clean the area, but until now, the Russian and Assad regime are rejecting any attempts, while not doing anything against the YPG themselves. The source of insecurity in Afrin will likely remain over the foreseeable future. Therefore, the only way of dealing with Tel Rifaat remains in trying to prevent infiltration from Tel Rifaat to Afrin as much as possible. In this regard, the wall in construction between Afrin and Tel Rifaat might ease the threat.

As long as Tel Rifaat remains a safe-haven for the YPG, the security in Afrin will always be threatened.

The Turkish Armed Forces currently have a light footprint in Afrin. Turkish soldiers are mainly located inside their bases and go on patrols with massive precautions and protective measures. The Turkish role is limited to advice, training and logistic support to the Syrian National Army and the Free Syrian Police in Afrin. If this changes and Turkey implements its New Southeast Strategy in Afrin, the security of the region might improve significantly. On the other side, a strong Turkish footprint model would directly risk Turkish soldiers and result in the impression of a Turkish annexation of Afrin, which may have other diplomatic and political consequences. Turkey’s engagement in Syria is based on the aim to preserve Syria’s territorial integrity and such a move might harm Turkey’s reliability.

If Turkey implements its New Southeast Strategy in Afrin, the security of the region might improve significantly.

The security apparatus in Afrin is divided into four autonomous sections: The Free Syrian Police, the Syrian National Army, the free courts and local councils. All are officially related to the Syrian interim government. This could be changed entirely towards hierarchic governance in which a government oversees the work of all three sections and has full control over them, basically to establish an alternative government to the Assad regime in the northwest of the country. This move could also be empowered by popular elections in the region. However, this move is a double edged sword. While on the one hand it may boost the role of the Syrian opposition and challenge the Assad regime in its entirety, on the other, it will re-draw the dynamics of the Syrian conflict with its risks as well as its opportunities.