People across the world have been sharing their frustrations on social media and speaking up to tell the truth about Jerusalem. This time their voices are being heard. 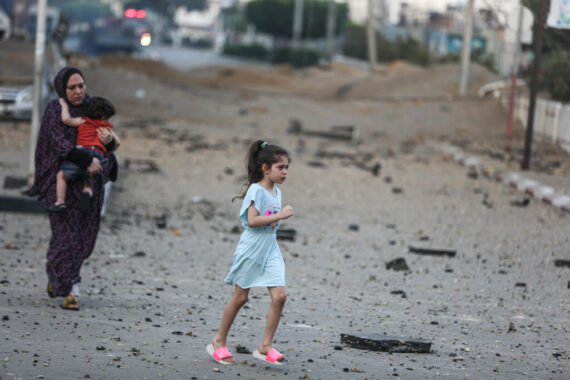 Palestinians leave their neighborhood to head to a safer location as Israeli warplanes continue air strikes on Gaza Strip, in Gaza City, Gaza on May 12, 2021. Photo by Ali Jadallah, Anadolu Images

When the video of a Minneapolis policeman pressing his knee on the neck of George Floyd who was lying on the ground without any resistance went viral on social media, “Black Lives Matter” protests erupted and spread across the world. Tens of thousands of protesters, in and outside the United States, from Amsterdam to Palestine and Tokyo took to the streets to show solidarity with the movement and called for justice for all victims of discrimination. Out of love for their fellow human beings, people spoke out.

During the past weeks, Palestinians have been protesting against the forced displacement of residents in the Sheikh Jarrah neighborhood in Jerusalem, followed by an Israeli court order to the residents, enforcing them to reach an agreement with the settlers who claim that these houses belong to them. In the meantime, and very recently, Said Odeh, a 16-year-old boy from a village south of the occupied West Bank was shot twice in the back and killed by Israeli forces. Other photos on social media of an incident with an Israeli soldier pressing his knee on the neck of Omar Alkhatib emerged earlier this week.

Why can’t human rights activists, heads of states, and others raise their voice against the evident human rights violations? Why could Canadian Prime Minister Justin Trudeau, for example, take the knee during a Black Lives Matter demonstration in Ottawa but not stand up for a single Palestinian life? Don’t their lives matter?

It seems, again, for the umpteenth time, most Arab countries prioritize close ties with the United States and Israel over speaking up against the apartheid state of Israel.

Earlier this year, the Palestinian Foreign Ministry argued that the continuing violations of the Israeli occupation are a blow to human rights and warned that the silence can be interpreted as “compliance with or fear of the occupying power.”

People from different corners of the world don’t know where to start. Should they be surprised by the deafening silence in the West, the lack of solidarity and guilty conscience of the leaders of the Arab Gulf, or the disturbing silence of the Asian and North African countries? It seems, again, for the umpteenth time, most Arab countries prioritize close ties with the United States and Israel over speaking up against the apartheid state of Israel and its ongoing violations of international human rights and humanitarian law.

Moreover, what about the deafening silence of feminists? Where is their solidarity with Palestinian women? Terry Reintke, a German politician and member of the European Parliament, lashed out as a “brave” and “powerful” woman against Turkey’s withdrawal from the Istanbul Convention and spoke about the hundreds of women who are killed every year in the country. Where is Reintke when Palestinian women and children are being killed by Israeli soldiers? Don’t their lives matter?

It is also striking that Western media outlets do not reflect the reality of what is happening in East Jerusalem. Recent developments in the region were referred to as “clashes between Israel and Palestine”, “chaos”, “scuffles”, “both sides”, and “war”. The terminology of these headlines manipulate the actual situation and give a wrong perspective on what is really happening.

Thanks to technology, and especially social media, people all over the world are able to follow the violence of the Israeli occupation troops against the Palestinians. However, Western media outlets still attempt to present the Palestinians as perpetrators. When Israeli troops stormed Al-Aqsa Mosque during prayer, the BBC stated that the protestors “hurled stones at the police” and referred to the attacks as “clashes” between the two sides.

Just when one might think it can’t get any worse, the Belgian public television VRT NWS: nieuws reported that “Israeli police was attacked with projectiles.”

The media in other European countries was not much different. The Dutch public television NOS claimed that there have been “fierce clashes between Palestinians and the Israeli police which resulted in more than 200 injuries, mostly on the Palestinian side.” Meanwhile at least 395 Palestinians have been injured and killed, as of Monday night, according to the Palestine Red Crescent.

According to a statement by UNICEF, 37 Palestinian children were injured and eight of them were arrested. Meanwhile, 13 Palestinians suffered injuries resulting in the loss of their vision. In the Gaza Strip, 21 Palestinians were killed by Israeli strikes in one day, nine of whom were children.

Western media outlets, which constantly self-advertise their objective reporting, are neither unbiased nor objective. People across the world have been  sharing their frustrations on social media, asking politicians, prime ministers, journalists, and human rights defenders to speak up and to tell the truth about what is happening in Jerusalem. And this time their voices are being heard.