Israel might have the power now to suppress the Palestinians, shoot them in the eye, fabricate false claims about Sheikh Jarrah neighborhood but its intellectuals, unlike its politicians, know well that Israel can’t sustain the system of apartheid for long. 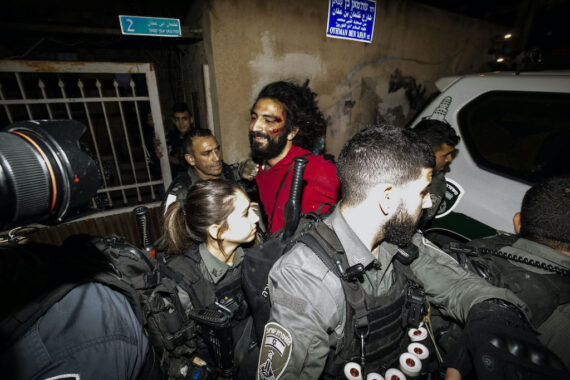 Israeli police officers take a Palestinian into custody during a demonstration at Sheikh Jarrah neighborhood after Israeli government's plan to force some Palestinian families out of their homes in East Jerusalem on May 04, 2021. Photo by Mostafa Alkharouf, Anadolu Images

The ongoing Israeli policies of mass expulsion of Palestinians from the neighborhood of Sheikh Jarrah in Jerusalem is a continuation of a more than seven-decade-long policy of ethnic cleansing against native Palestinians following the creation of Israel on May 15, 1948.

Israel’s nature has been augmented in ethnic cleansing and settler-colonialism from day one, when its creation meant the mass expulsion of some 750,000 Palestinians from 532 villages in 1948. Israel’s creation on the ruins of Palestine was based on a complete negation of their existence, forcing them out of their lands and houses, and replacing them with colonial-settlers from all over the world.

Israel’s settler-colonialism and viewing Palestinians as a threat to this project and, therefore, displacing them by all means possible – was and still is the backbone of this project. Despite the UN Resolution 194, which calls for the return of Palestinian refugees to their towns and villages, Israel continues not only denying these refugees the right to return, but also pursues its policies of expulsion against Palestinians who managed to remain in their towns and villages.

From relocating these Palestinians to ghettos such as those in Jaffa, to placing them under military orders in what became Israel, to mass expulsion such as the case of the village of Abu Ghosh in 1950 and Al-Majdal in 1949-1950, Israel has proven repeatedly that its settler-colonialism project necessarily means uprooting the Palestinians.

Not only this – Israel has engaged in another war of changing history by renaming most street names and villages taken from their Palestinian owners and giving them Hebrew names. The village of Yibna became “Yivne,” the village of Aqer became “Kiryat Ekron,” and so on. Zionism has taken over an entire country with institutions and infrastructure and has turned its people into refugees. The process of changing demographics and names targeted Palestinians from villages around Jerusalem, especially west of Jerusalem.

Flourishing Palestinian neighborhoods to the west of Jerusalem such as al-Qatamoun, al-Talbieh, al-Baqa’a, and others were depopulated, and the houses were stolen in the most barbaric manner and given to the families of high-ranking Israeli generals as war booty.

Flourishing Palestinian neighborhoods to the west of Jerusalem such as al-Qatamoun, al-Talbieh, al-Baqa’a, and others were depopulated, and the houses were stolen in the most barbaric manner and given to the families of high-ranking Israeli generals as war booty. Some of these houses belonged to well-known Palestinian families such as al-Dajani, al-Khalidi, al-Karmi, and many others.

The house of the family of the well-known Palestinian-American intellectual Edward Said was among these houses in al- Talbieh. In some cases, invading Zionist militias found food still hot on stoves left behind by terrified Palestinian families who had to leave at gunpoint.

Many of these wealthy Palestinian families, turn-refugees, ended up in what became known as East Jerusalem. This includes Shu’fat refugee camp and the neighborhood of Sheikh Jarrah. In 1954, Jordan which was in control of the West Bank until 1967, including East Jerusalem, signed an agreement with the UNRWA, the United Nations Relief and Works Agency for Palestine Refugees in the Near East, according to which it built 28 housing units for Palestinian refugees, in addition to individual agreements with individual refugees to register the ownership of these houses under their names. However, the process of registration has not been completed due to the 1967 war, according to Jordan, during which Israel occupied the entire West Bank.

Israel’s settler-colonial logic suggests that these Palestinians are not the rightful owners of these houses, although they have been living there for 68 years. This logic too assumes that Jewish settlers who just arrived from Europe have a right to the houses. If Israel claims that these refugees do not have a right to these houses in Sheikh Jarrah, why does it not allow them to return to the homes stolen from them 73 years ago, some of which are located literally a few blocks away in West Jerusalem?

The return of Palestinian refugees is a taboo topic that Israel is not willing to discuss. The bad news for Israel is that despite all its plans to force Palestinians out of Jerusalem, it has failed miserably. The numbers speak louder than its actions. Khalil Tafakji, the head of the maps department at the Arab Studies Society in Jerusalem, in the Old City of Jerusalem, told Politics Today that out of 4,220 ownership deeds, Palestinians, either Muslims or Christians, or private owners, own a total of 84%, in addition to the 8% owned by Muslim waqfs. The remaining deeds are classified either as under state or municipality ownership, including real estate owned by Jewish settlers, most of which is located in the city’s Jewish Quarter, which has historically been predominantly Jewish. These numbers do not include waqf ownership associated with the Al-Aqsa Mosque.

Some 35,000 Palestinians live in the Old City alongside some 4,500 Jewish settlers. The numbers of the latter fluctuate depending on tensions in the city as many of them live in settler outposts. This is despite all Israeli attempts to use legal loopholes to strip Palestinians off their houses by imposing high taxes on them, unleashing armed-to-the-teeth radical colonial-settlers against them, and using excessive police violence.

Israel uses all possible means to force Palestinians out of Jerusalem. This includes offering them huge sums of money. The owners of one of four houses currently under threat of expulsion in Sheikh Jarrah were offered $6 million to leave the house and they refused. The Israeli government claims that what is happening in Sheikh Jarrah is a “real estate dispute,” which is laughable. What Israeli settler told Palestinian Muna al-Kurd, whose house is under threat of confiscation, on camera says it all. “If I don’t steal it, someone else is gonna steal it,” he said in English. This only proves that this is a systemic campaign led by settler groups to kick Palestinians out.

In light of the Palestinians’ refusal to leave, the Israeli apparatus moved to using force to expel them. This included breaking into Al-Aqsa Mosque and firing rubber-coated canisters and sound bombs at worshipers, injuring 208 Palestinians, according to the Palestinian Red Crescent Society. Three of these Palestinians lost one or both of their eyes as the invading Israeli police intentionally targeted Palestinians in the head. Palestinians faced their repression with their bare chests with one Palestinian teen literally jumping into a group of Israeli soldiers. The battle conjures images of David and Goliath.

History proves that Israel’s use of force against Palestinians only backfires. The Israeli state has to recognize the rights of Palestinians because maintaining an apartheid system, as it has recently been characterized by Human Rights Watch, will end up costing them way more than giving the Palestinians their full rights. Palestinians are not going to disappear, be it in Jerusalem or inside Israel itself. Today, Israel has turned into apartheid state that thinks a Jewish settler who just arrived in the country has a right to houses that have been inhabited by Palestinians for hundreds of years.

Israel might have the power now to suppress the Palestinians, shoot them in the eye, fabricate claims that what is happening in Sheikh Jarrah is a “real estate dispute,” but its intellectual leaders, unlike its politicians, know very well that they can’t sustain this system of apartheid for very long. In the same way that the Second Palestinian Intifada erupted in Jerusalem, a Third Palestinian Intifada is now a stone’s throw away. But this time, no one knows where it will stop. And then, all the normalization agreements and all the recognitions of Jerusalem as Israel’s capital will not be able to stop the Palestinians and their supporters across the globe. 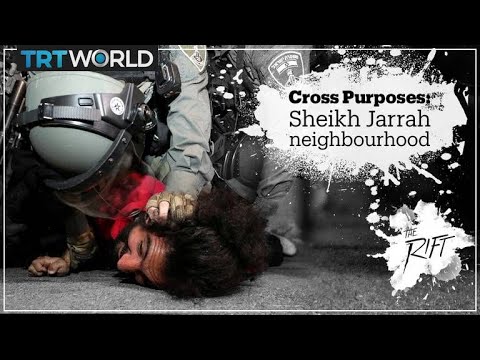 Also Read
Solidarity with Palestine in Stadiums: When Sports and Politics Conjoin
We use cookies to optimize your online user experience. To learn about our use of cookies and how you can manage your cookie settings, please see our Privacy Policy. By continuing to use our site you are excepting our use of cookies.Accept Cookies & CloseMore Info