Will Biden set the “crown jewel” of the Arab-Israeli relations? 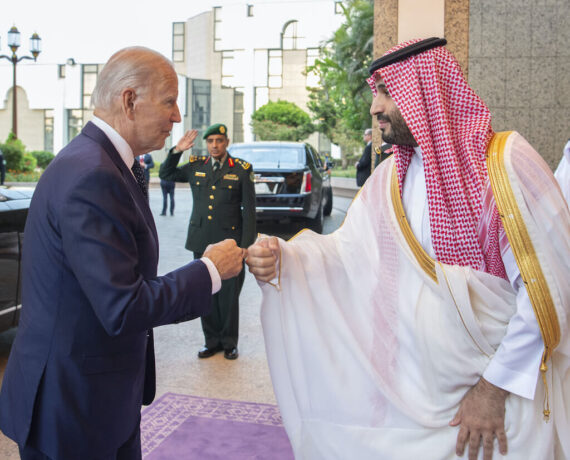 U.S. President Joe Biden announced that U.S. peacekeepers would withdraw from the Red Sea islands of Tiran and Sanafir by the end of the year during his visit to Saudi Arabia on June 16.

The announcement came after quietly negotiated deals between Israel and Saudi Arabia. Israel approved the outline of a deal ceding control of the strategic islands from Egypt to Saudi Arabia, while Saudi Arabia opened its airspace to Israeli flights.

Formerly, Saudi Arabia had only allowed Israeli airplanes flying from Tel Aviv to the UAE and Bahrain through its airspace. The kingdom’s new decision allows unlimited use of its airspace by Israeli airlines to fly to and from the country.

For months, the Biden administration sought to formalize security and economic deals between the two countries to possibly pave the way for the normalization of their relations. Biden hailed the kingdom’s decision, saying that it could aid in moving toward Israel’s further integration into the region.

Strategic importance of the islands

The Tiran and Sanafir Islands, which were ceded from Egypt to Saudi Arabia, are currently uninhabited, yet they hold key strategic value. In line with the terms of the 1978 Camp David Accords, Egypt was not allowed to station troops on the islands and only peacekeepers—now to be replaced by cameras—are present. The islands were kept demilitarized to maintain peace in the region.

According to the treaty, Israel needs to ratify the islands’ territorial status. With the deal, Israeli officials, including the Israeli prime minister’s office, and the foreign and defense ministries, gave the green light for the Tiran and Sanafir Islands to be taken over by Saudi Arabia.

The two islands are located at the entrance of the Gulf of Aqaba where Tiran controls all shipping to Eilat harbor, Israel’s only access to the Red Sea. The islands remain vital to Israeli trade with Southeast Asia, while Saudi Arabia seeks to utilize the islands for tourism and economic development.

According to American news website Axios, Saudi Arabia will pledge to the U.S. that it will maintain freedom of navigation in the Strait of Tiran for Israeli ships. Meanwhile, the U.S. will provide security guarantees for Israel regarding Saudi Arabia’s commitments.

Egypt had sovereignty over the Sanafir and Tiran Islands since 1950. When Egyptian President Gamal Abdel Nasser nationalized the Suez Canal in 1956, Israeli troops invaded the islands. Egypt retrieved Sanafir and Tiran, and the islands were administered by Egypt as strategic, trade, and military assets.

In 1967, Nasser leveraged the islands to close the Straits of Tiran, blocking the port of Eliat. This triggered the Six-Day War with Israel. By the end of the war, Israel captured the two islands for the second time along with the Sinai Peninsula. Israel returned the islands, which were to be monitored by the international community, to Egypt under the Camp David peace treaty.

Why did Egypt cede Tiran and Sanafir Islands to Saudi Arabia?

Egypt decided to cede Tiran and Sanafir Islands to Saudi Arabia in April 2016. Saudi Arabia had made sovereignty claims over Sanafir and Tiran twice: first in 1957 and then in 1968, pledging free maritime passage. In 1990, Hosni Mubarak relinquished control of the islands to Saudi Arabia when he issued a presidential decree sent to the UN that set Egypt’s maritime baselines in the Red and Mediterranean Seas.

In 2010, Saudi Arabia posted its maritime baseline to the UN and made another sovereignty claim. When Egyptian President Abdel Fattah el-Sisi decided to cede the islands to Saudi Arabia, the decision was met with nationalist backlash and protests.

In 2018, Egypt’s Supreme Court approved the deal by nullifying the contradictory rulings of two lower courts opposing ceding control of the islands, and therefore, a final decision was reached by the Egyptian side. With Israeli agreement, the islands’ sovereignty will be transferred to Saudi Arabia.

Saudi Arabia has put forth that normalization with Israel would not be possible unless the Palestinian issue is resolved. Following the Abraham Accords of 2020 and the series of normalization deals between Israel and the Arab states of the UAE, Bahrain, Sudan, and Morocco, this work-around agreement brokered by the U.S. may signal an advance in Saudi-Israeli relations. Will Biden set the “crown jewel” of the Arab-Israeli relations?