Until MBS visited Turkey on June 22, Saudis preferred to talk with Turkey behind the scenes and extend the negotiation process for normalization. 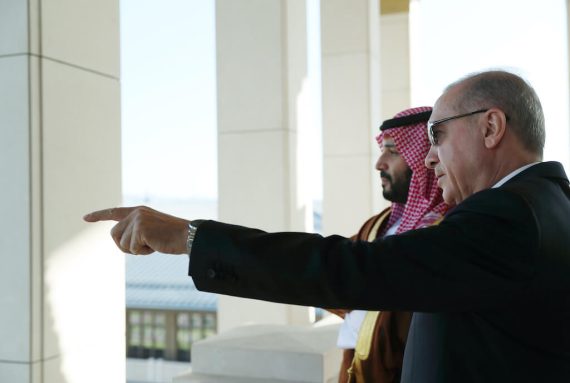 Saudi Crown Prince Mohammed bin Salman’s (MBS) visit to Turkey on June 22, 2022, consolidated a new paradigm in the Gulf. This comes along with a shift from a militarized and securitized rhetoric to a diplomatic reconstruction process based on economy-oriented policies. In the joint statement, Saudi and Turkish officials underlined their determination to political, economic, military, energy, technology, and security cooperation based on “historical brotherhood” to consolidate regional peace. Hence, the reciprocal visit has apparently ended the break in Saudi-Turkish dialogue upon the mutual needs of both sides to reconcile by negotiating the possibility of damaged bilateral relations.

Saudi decision-makers and media portrayed the crown prince’s visit as the last leg of his regional tour to Egypt and Jordan, and, thus, not a special visit to Turkey per se. Like Egypt and Jordan, MBS’s visit is significant for the Turkish economy, struggling since late 2021 with currency devaluation against the U.S. dollar. One expectation from the visit was to bolster investment, especially in the defense sector, which might also be reinforced by tightening social and cultural ties.

Since the beginning of this year, Saudi Arabia and Turkey have been trying to manage a diplomatic meeting at the highest level. Although Turkish President Recep Tayyip Erdoğan had announced a potential appointment with King Salman bin Abdulaziz in February 2022, the meeting was canceled. Later, in May 2022, Erdoğan visited the kingdom. During that time, Erdoğan mentioned King Salman’s “promise” to visit; according to some, thus drawing attention  to the Saudis’ hesitancy in terms of timing and content to pay a diplomatic visit to Turkey. Despite the mutually positive atmosphere, until MBS visited Turkey on June 22, Saudis preferred to carry on with talks behind the scenes and extend the negotiation process for normalization.

On his visit to the Saudi Kingdom, President Erdoğan had emphasized the opening of a “new era” in bilateral relations and strengthening ties in several fields. However, Saudi newspapers preferred to ignore Erdoğan’s earlier visit to Saudi Arabia, highlighting MBS’s visit to Turkey as the mark of the beginning of this “new era” of cooperation. Likewise, following Erdoğan’s visit to the Saudi Kingdom, officials of both sides made no joint statement. Despite the absence of the latter, the closure of the Muslim Brotherhood’s Mekameleen TV station in Turkey signaled, at least, one of the priorities set by the Saudis.

As the issue of the Muslim Brotherhood is removed from the table, so the concerns of Saudi decision-makers are eased, and diplomatic channels can be reopened. In fact, Turkish foreign policy-makers have always tended to avoid irreparably jeopardizing bilateral relations and have always adopted a respectful rhetoric for the rulers of Saudi Arabia. Not long after MBS’s visit, Erdoğan announced the Saudi intention to buy battle-proven Bayraktar drones, involved in successful combat in Libya, Syria, Nagorno-Karabakh, and Ukraine, from Turkey. Behind the Saudis’ colder attitude regarding making a joint statement with Turkey was an effort to play hardball and embolden their position in the normalization process.

The post-al-Ula regional security narratives of the Saudis have revolved around adjusting the shortcomings of personalized politics and in repairing Saudi Arabia’s bilateral relations. The Saudi assertive rhetoric against Turkey was mainly the consequence of the Khashoggi affair in 2018 and the following campaign targeting MBS’s persona both in Turkey and on the international stage. The transfer of the Khashoggi trial to the Saudi authorities in April 2022 calmed the tension, alleviating the damage. It became clear that Turkish decision-makers were more willing to accelerate the rapprochement with the Kingdom.

In this vein, welcoming MBS in Turkey meant that Turkey accepts the prince’s authority and his international representation of Saudi Arabia. While Turkey needs Saudi investments for its struggling economy, Saudi Arabia also needs Turkey to restore the tarnished Saudi image as MBS’s political ventures have received severe criticism for domestic human rights abuses, the military intervention in Yemen, and the Khashoggi affair.

Through initiating peace and normalization rhetoric, MBS is now reconstructing his image as a young statesman working to consolidate Saudi Arabia’s status as the regional stabilizer and peacemaker in the Arab world and as the person behind a unique domestic reform process that has never been experienced before in Saudi politics.

Thanks to its natural resources and wealth, the Kingdom of Saudi Arabia has always had the luxury  to reorient conflicts to its benefits. Russia’s invasion of Ukraine in February 2022 pushed the Biden administration, which initially criticized MBS’s foreign policy actions, to start talks with Saudi Arabia to garner their support behind Ukraine in an attempt to further isolate Russia and diversify alternative oil resources. President Biden announced a joint summit in Jeddah in July 2022; however, he added that he would not meet with MBS but would attend an international meeting where MBS will be present.

Leaving a military- and security-based foreign policy and adopting active diplomacy is likely to help Saudi Arabia balance its security reliance on the United States as an external guarantor and hail the Kingdom as a initiator of a new security architecture. Saudi decision-makers understood that normalizing relations with Turkey and Israel is vital for Saudi foreign policy.

Turkey’s isolation, on the other hand, in the energy rivalry in the Eastern Mediterranean through Saudi Arabia’s siding with Egypt, Greece, Cyprus, and Israel attested to Turkey’s need to deal with Egypt, Israel, and Saudi Arabia all at the same time. Having the Saudis near, taking some normalization steps with Egypt, and establishing dialogue with Israel would likely help Turkey reach an accommodating status quo for its regional security needs, particularly in the Eastern Mediterranean.

While Turkey and Israel moved to restore ties at a high level after 15 years with Israeli President Isaac Herzog visit to Turkey in March 2022, the coming days are likely to bring the initiation of an official dialogue between Saudi Arabia and Israel, which in turn will likely have favorable implications for Turkish foreign policy.