Turkey aims to export the TOGG primarily to European countries in 2024 and then to other parts of the world. 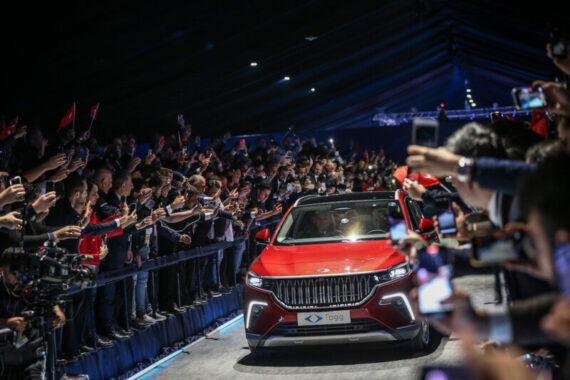 Turkish President Recep Tayyip Erdogan takes a test drive during the opening ceremony of the Togg Technology Campus, where the country's first domestically developed electric car C-SUV will be mass-produced, in Bursa, Turkey on October 29, 2022. Photo by Anadolu Images

n October 29, Turkey’s long-awaited domestically produced electric car (TOGG) production campus was inaugurated in Gemlik, Bursa, and the first mass-produced vehicle saw the light. This was the most important step for Turkey to realize its 60-year-old dream of domestic automobile production.

TOGG means more than a simple car production for Turkey. The first step had been taken in 1961 by the order of President Cemal Gürsel. The first domestic automobile, whose intellectual and industrial property rights belong to Turkey, was produced in just 4.5 months with completely domestic facilities, except for certain parts like electrical equipment, differential gears, glasses and tires.

This Turkish domestic automobile, called “Devrim” (Revolution), had aroused great excitement all over the country when it was exhibited for the first time on October 29, 1961. However, it stopped on the road since it was filled with little fuel only for maneuvering in line with the safety precautions of the time. Subsequently, the project was terminated after opposition groups carried out black propaganda against Devrim, and the car was never mass-produced. But despite this bad memory, Turkey never gave up on its goal for a domestically produced automobile.

After nearly 50 years, then Prime Minister Recep Tayyip Erdoğan brought this issue to the agenda again in 2011 and made a call to investors to produce a Turkish automobile brand at the annual meeting of the Turkish Industry and Business Association (TÜSİAD). After Erdoğan became president, he continued his support for the project. Finally, the Anadolu Group, BMC, Turkcell, Zorlu Holding, and the Union of Chambers and Commodity Exchanges of Turkey (TOBB) launched the country’s Automobile Initiative Group (TOGG) in June 2018. Thus, Turkey entered a new phase in the production of its own automobile.

Read: Turkey’s Submarine Industry: Where Does the Country Stand Currently?

As a result of the rapid developments in just one year, TOGG’s first C-SUV and Sedan prototypes were introduced in December 2019. Later, in 2020, the groundbreaking ceremony for the manufacturing plant in Gemlik was held. Just two years later, TOGG’s mass production process started on October 29, 2022. With the launch of TOGG sales next year as part of the 100th anniversary of the foundation of the Turkish Republic, Turkey’s second domestic automobile production attempt will be successfully fulfilled.

TOGG is an important project for Turkey as it is a high-tech product. Besides its impressive design, it has distinctive features such as being fully electric (not hybrid), fast charging under 30 minutes, strong resistance to collisions, and acceleration to 100 km in 4.8 seconds. With these features, TOGG has evolved from a simple vehicle into a completely smart device.

More importantly, TOGG based on a 60-year-old dream, is the product of perseverance and determination. Since the onset of work on TOGG, one of Turkey’s vision projects, opposition groups in Turkey attempted to sabotage the project with demoralizing statements—“You can’t do it,” “You can’t sell it,” “There is neither a factory nor an automobile”—just like in 1961. Despite all this, the government and the TOGG team continued on their quest without paying any attention to such unnecessary discourse.

Likewise, TOGG is important as it is the product of Turkey’s own intellectual capacity. Almost all of the more than 1,000 personnel who work for TOGG are Turkish nationals, demonstrating the high technology capacity of Turkey’s automotive industry.

How Domestic Is TOGG?

In today’s market conditions, it is not possible for an automobile to consist 100 percent of domestic parts. Despite this, 51 percent of TOGG’s parts are domestically produced for now. This rate is expected to increase to 65 percent by 2025. This means that TOGG will become more local in the short run.

Based on these data, which shows that the automobile industry in Turkey is quite dynamic and the electric car industry is new, TOGG can be a strong actor in the country’s automobile industry. Also, it should be underlined that Turkey is entering the market with electric cars in line with the rising trend in the automotive sector. This actually increases TOGG’s chances of success in such a highly competitive market.

Turkey aims to export the TOGG primarily to European countries in 2024 and then to other parts of the world. Of course, in the short term, the TOGG will not enter the global automotive market ahead of strong competitors, but in time, the company has the potential to compete and surpass them. If so, the TOGG will have contributed to decrease Turkey’s foreign trade deficit as a high-tech and high-value item on the export list.

The TOGG factory will employ more than 4,000 people in Turkey when its annual production capacity reaches 175,000. By 2030, as the TOGG factory plans to produce one million vehicles, new production facilities may be required apart from the manufacturing plant in Gemlik. This is expected to have a positive impact on employment. Considering the people who will work in the service networks and subsectors, the domestic automobile project will also help reduce unemployment in Turkey.

Finally, TOGG will be using environmentally friendly lithium-ion batteries, which set zero emission as their goal. In this manner, TOGG is in conformity with Turkey’s long-term goals and policies for combatting climate change by reducing air pollution and greenhouse gas emissions.

Selim Yeşiltaş is a PhD candidate at Sakarya University in the Department of International Relations.