Turkey’s Submarine Industry: Where Does the Country Stand Currently? 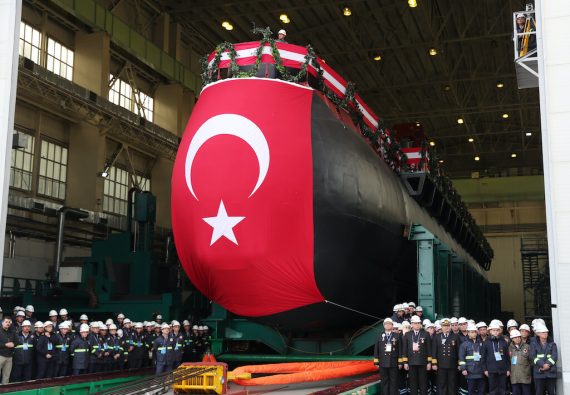 Turkey’s NTSP (New Type Submarine Project) is among the country’s most striking national defense industry projects. It is an advanced submarine force with a maximum indigenous industrial participation based on the agreement between Turkey and Germany, signed in July 2009, for the co-production of German Type 214 submarines in Kocaeli, Turkey.

The Type 214 submarine has advanced technological features, particularly its air independent propulsion (AIP), that will provide the Turkish Navy with both a peacetime deterrent and power projection capabilities. Turkish security planners also expect that the project will significantly enhance Turkish know-how in the submarines industry which in turn translates into enhanced capabilities in realizing Turkey’s indigenous MILDEN (Milli Denizaltı) National Submarine Program.

Considering the current regional underwater balance, Turkey enjoys a numerical superiority over its regional counterparts with a total of 12 diesel-powered attack submarines (Ay class, Gur class, and Preveze class) which are based on the German Type 209 family. Yet, Ay-class submarines, which joined the Turkish Navy in the early 1970s and throughout the late 1980s, are quite old.

Turkey has retired two Ay-class submarines and may retire another two in the coming years, whereas the Greek Navy has been equipped with Type 214 submarines between 2010 and 2015, granting it a technological edge over Turkey and complicating undersea balance. Similarly, Egypt received four German S-44 submarines recently to modernize its outdated submarine inventory while it desires to purchase more under its ambitious naval modernization program.

Although Turkey is implementing a national modernization program on its submarine inventory, it mostly serves as a stopgap solution until the Type 214 submarines arrive. Turkey’s first Type 214 submarine was named after the legendary Ottoman admiral and cartographer Piri Reis. The submarine was placed in “floating docks earlier this year and is scheduled to be put into service in 2022. The remaining five Reis-class submarines (all Type 214 family) will follow in successive years. Considering the possible retirement of some of the Ay-class submarines, it can be argued that the Turkish Navy will still maintain its numerical superiority.

Naval power is often defined both as a military and diplomatic instrument. Developing robust surface and underwater forces provides not only defense, deterrence, or offense, but also enhances diplomatic and economic influence via the effect of showing the flag. Meanwhile, the impact of naval power is multiplied in accordance with the country’s length of coastline as seen in the example of Turkey, a country with over 8,000 km of coastline and located at the choke points of vital global maritime lines.

Read: Turkey’s Drilling Ships to Respond to Injustice in the Eastern Mediterranean

Although submarines are traditionally attributed sea-denial roles, which aim to undermine adversary trade in maritime lines or prevent naval forces from reaching friendly shores, the current geopolitics and technological leaps may dictate varying uses. Different foreign and security policies, geographical locations, or the status of technological and financial situation could significantly influence the way armed forces employ submarines. Against this backdrop, submarines can both deny or limit access to specific sea areas, and also launch precision strikes against land targets, help to deploy special forces, and collect intelligence in forward operating locations.

In contemporary military technology, one of the major functions of a submarine force is to provide a peacetime deterrent by increasing uncertainty over the deployments of major military assets. Contrary to surface combatants, submarines avoid naval show of force and can stealthily operate in significantly forward locations. This operational concept, when combined with substantial offensive capabilities is strongly linked with increased deterrence credibility. Considering the latest security landscape in the Indo-Pacific, it is precisely such increased deterrence credibility against China that the U.S. and the UK are seeking to provide Australia via the AUKUS agreement.

In terms of power projection, in order to be able to shape the course of events, it is fundamental to have sufficient capabilities not just to operate but also to deploy and sustain military presence beyond friendly littorals. Against this backdrop, Turkey’s Reis-class submarines are expected to contribute significantly to the Turkish Navy’s peacetime deterrent and power projection capabilities, for three main reasons.

First, Turkey is geographically surrounded by semi-enclosed seas and shallow waters. This weakens the effectiveness of anti-submarine warfare (ASW) instruments by reducing the detection capability of active and passive sonars, making it harder to expose submarines. This geographical feature is accompanied by the stealthy features of the Reis class which may multiply the submarine effectiveness in shallow waters or littorals.

Reis-class submarines will have AIP which ensures much longer and silent underwater operations without the need to access atmospheric oxygen, thus avoiding exposing themselves to detection.

Reis-class submarines will have AIP which ensures much longer and silent underwater operations without the need to access atmospheric oxygen, thus avoiding exposing themselves to detection. Open sources suggest that AIP submarines can operate for three weeks underwater while traditional diesel-electric submarines need to surface for air supply after two to three days. Germany’s modern submarine operation concept warrants this as it is designed to counter increasing Russian influence in the shallow waters of the Baltic Sea. In sum, relevant geography and technology favor the operation of Reis-class submarines in the Aegean and Eastern Mediterranean Seas.

Second, Reis-class submarines will be equipped with technologically advanced weapons. Among the planned weapons to be integrated to the submarines are IDAS (Interactive Defense and Attack System for Submarines) SAM and AKYA. IDAS SAM is designed by Germany to increase the self-defense capability of submarine forces. It provides engagement against ASW helicopters, small- to medium-sized surface vessels, and specific coastal targets. AKYA is a Turkish national heavy class torpedo and is expected to enter the Turkish Navy’s inventory in the coming months.

Along with Reis-class submarines, AKYA will be used by Preveze– and Gur-class submarines. Turkish defense industry officials argued that the torpedo is significantly better than its global counterparts. Furthermore, President of Turkish Defense Industries İsmail Demir stated that the submarine version of ATMACA anti-ship cruise missile is being improved. It is also expected that GEZGIN long-range cruise missile will be integrated into the Turkish submarine fleet inventory.

Third, Reis-class submarines with their offensive capabilities could satisfy Turkey’s defense priorities which have emerged in the last decade. Recent Turkish foreign policy in its surrounding regions demonstrates that Turkish decision-makers are inclined to forwardly counter threats and to intervene in ongoing crises in order to aid allies. This policy best manifested itself in Turkey’s support to Libya’s UN-recognized Government of National Accord (GNA). By virtue of their stealthy features and conventional strike capabilities, Reis-class submarines will enhance Turkey’s military capacity in distant locations.

Of utmost importance for Turkish decision-makers is to achieve a maximum level of independence in the production of key defense platforms. In terms of underwater vehicles, this means that the experience developed under the New Type Submarine Project will be transferred to the country’s MILDEN National Submarine Program. For instance, at the 15th International Defence Industry Fair (IDEF 2021), Turkish defense companies unveiled the conceptual designs for three mini submarines. Similar experience is gained by the upgrade of three Pakistani Agosta 90B submarines. Turkey’s emerging submarine force will likely function both as a deterrent and a power projection instrument through the late 2020s.