Rather than radical changes, small yet realistic steps can be taken in German foreign policy in order to re-establish relations between Turkey and Germany as the positive atmosphere of the most recent Gabriel - Cavusoglu meeting demonstrates. 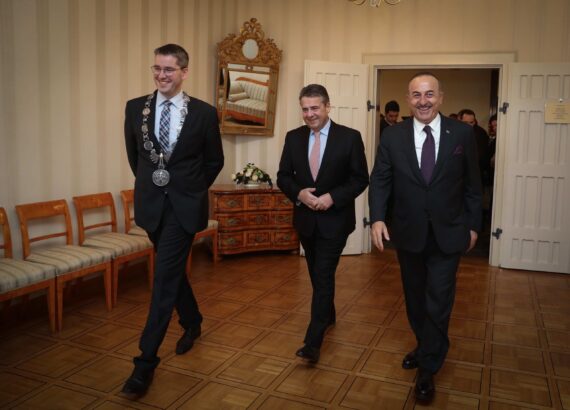 In a speech delivered on December 5, 2017, German Foreign Minister Sigmar Gabriel, member of the Social Democratic Party of Germany (SPD), stated that it would not be beneficial for the U.S. to leave European countries alone regarding rising powers in the Middle East and other Asian countries. He went on to suggest that the European Union and Germany are required to defend their own interests more self-confidently. A few days after Gabriel’s statement, SPD Chair Martin Schulz also made a similar emphasis during the party’s congress. Adopting an unrealistic rhetoric, Schulz called for the establishment of a “United States of Europe” by 2025.

While representatives of the Christian Democratic Union of Germany (CDU), a center-conservative party, did not brush off this suggestion made by Schulz as an idealistic one, they expressed that such a thing was not possible in the short-run. As can be recalled, CDU leader and German Chancellor, Angela Merkel, emphasized in a speech she made in May 2017 that Germany needed a foreign policy less dependent on the U.S. In this speech, Merkel also stressed that with the inauguration of Donald Trump, the U.S. was no longer a reliable ally, adding that therefore Europe is required to determine its own fate from now on.

During his speech, Gabriel pointed out that the EU has been gradually losing its influence and that Germany in particular needed to take a more active role in foreign policy. Another notable statement made by Gabriel is that new areas of crises have emerged in the east of Europe, which have disrupted stability in the region. Within this framework, the German Foreign Minister claimed that the Syria summit between the presidents of Russia, Turkey and Iran in Sochi must be read as the “old empires rising,” adding that “the major powers gathered in Sochi are not friends, but they have plenty in common. They base their identity both at home and abroad on their historical greatness. And that is the crucial factor that distinguishes them from us: they invest considerable capital in throwing their weight about to show the West from time to time.”

Can Germany defy the U.S.?

Gabriel also underscored that Turkey does not refrain from launching military operations or having dispute with the U.S. in order to protect its own interests against the Syrian offshoots of the outlawed PKK’s quests for an autonomous region, adding that the EU and the U.S. remain passive in the face of such problems. Within this scope, one of the most noteworthy expressions of Gabriel is undoubtedly “We need to realize that we can either try to shape the world ourselves or wait to be shaped by the rest of the world.”

Within the German parliamentary system, in which a new government has failed to be formed for over three months, not only are transatlantic relations being questioned, but a divergence from the conventional foreign policy sustained since the Second World War is also occurring. How can we evaluate these developments? While it must be noted that the choices and statements made by the federal government and foreign ministry who are temporarily in charge must not be read within long-term foreign policy plans, it is evident that Germany has adopted this stance since 2014. Consequently, the latest statements are not directly linked to the Trump administration.

It would also be useful to recall the statements made by the former non-partisan German President Joachim Gauck, former Foreign Minister from the SPD Frank-Walter Steinmeier and Defense Minister Ursula Gertrud von der Leyen from the CDU at the 2014 Munich Security Conference, who called for a more active Germany in world politics before the statements made by Merkel in May 2017 and the SPD politicians in December 2017. Along with the discussions that have been ongoing for a long time in regards to whether Germany would become a more active foreign policy actor with less dependence on the U.S., the positions of the three countries referred to with their historical past, particularly Turkey, have also been considered within this context.

Is Gabriel’s emphasis on Russia, Iran and Turkey a defiance?

As a number of studies indicate, although the German public supports the idea of an institutionally more active EU under the leadership of Germany and France, they do not give as much credit to Germany’s increasing military expenditure, which is vital for realizing this idea. Such conventional and compulsorily passive stance of Germany, which is the fourth largest economy in the world, also reflects the actual and traditional foreign policy approach of the SPD. However, it has been observed that a trend of change (at least on the level of rhetoric for the time being) has been adopted by both the CDU/CSU alliance and the SPD as of 2014. This tendency has discursively become much more explicit due to the foreign policy priorities of Trump.

Meanwhile, German public opinion and leading media circles who read the statements of Gabriel as a defiance to transatlantic relations indicate through a more realistic perspective that Germany cannot successfully stand by itself and that therefore there is no alternative other than siding with the U.S. In this case, what can we understand from Germany’s emphasis that countries like Russia, Iran and Turkey are increasing their prominence in regions where the U.S. is claimed to be ceding?

The German political elites’ divergence from the U.S. or the formation of a (military) alternative within the present state of the EU does not seem possible, at least in the short run. It is not certain that a possible concurrence of Germany and France will be agreed upon by all other EU Member States. It must be noted that one of the reasons for Germany’s new quest in defense is Brexit, which will see the EU lose the United Kingdom – a military power who is also a permanent member of the United Nations Security Council. Therefore, Germany cannot possibly lead a formation that would offer an alternative to the U.S. for the time being. Cognizant of this, the German administration endeavors to mark some provocative maneuvers in order to improve relations with the U.S. to some extent. Undoubtedly, one of the leading maneuvers in this sense has been the gesture towards prominent countries in places where a vacuum of power has been observed within the declining influence of the U.S.

The project of an “active Germany” and Turkey-Germany relations

One of the most noteworthy aspects of Gabriel’s remarks for the Turkish public opinion is his emphasis on “old empires” while referring to Russia, Iran and Turkey. This emphasis may have been made with an aim to highlight that the uni-polar world order lead by the U.S. “Empire” is about to come to an end. Although this statement may not turn out to be correct in all respects, this possibility decreases as the current position of Germany cannot allow the country to consider a notable detachment or embark on new alternatives aside from the U.S. in the short run. For this reason, Gabriel’s statement can be said to underline the fact that the situation is not promising for the U.S. either, and that the U.S. administration is required to support the institutional transformation of the EU and contribute to a stronger and more realistic Western alliance.

Furthermore, although Germany had adopted an irrational approach to Turkey, the country currently signalizes a return to a more realistic foreign policy. This choice can be read as a message against the U.S. and the historic alliance with Germany. Drawing on an “uncontrollable” Turkey, Iran and Russia, which can be interpreted as an element of threat through a conventional transatlantic viewpoint, Gabriel signalizes that better relations can be established with these countries with a perspective of a more active foreign policy that pays particular regard to the economic interests of the EU and Germany, contrary to the old state traditions. Calling for a more reconciliatory approach with Russia with stress on economic cooperation, Gabriel is known to be siding with the Trump administration in regards to Iran and supporting the maintenance of the nuclear agreement deal made with Tehran. As for Turkey, Germany is expected to pursue a realistic perspective while it is estimated that German foreign policy will endeavor to establish a partnership with the Ankara administration on equal terms instead of an asymmetrical relationship.

Stating that Germany cannot act alone in international politics, Gabriel has consistently underlined that Germany is required to act with the EU in order to secure Europe in cooperation with Russia. Parallel to this, Germany is closely observing Turkey’s foreign policy choices that prioritize the country’s own interests as Turkey is a NATO ally which does not act under the control of the U.S.

It is fair to state that Germany will seek to develop close ties with Turkey with a more realistic perspective in the following period. Although German politics and media will probably try to affect Turkish politics due to the upcoming 2019 elections in Turkey, a return to a more realistic ground is inevitable in the long run.

As can be seen from the German Foreign Minister’s approach, Germany’s attitude towards Russia is not in line with the U.S. and the projects implemented with Russia, such as Nord Stream II, indicate that Germany is prioritizing its own interests despite the U.S. Refusing Trump’s Iran policy may also increase the possibility of establishing closer ties between Berlin and Ankara.

The fact that Germany is avoiding a future projection that is dependent on the U.S. will consolidate the need to search for other alternatives both inside and outside of the EU. Since alternatives within the EU are extremely limited in the short-term, establishing more realistic relations with Turkey will probably be considered as one of Berlin’s long-term projections.

While it does not seem possible to implement this approach into practice in the near future, it still needs to be considered by Germany. Over the past four years, the German administration has diverged from a rational approach in its relations with Turkey. However, it is possible for Berlin to pay regard to the realities of Ankara in a more reasonable way, which must not be overlooked due to the presence of the U.S. and the EU. In doing so, following the formation of a new federal government in the near future, rather than radical changes, small yet realistic steps can be taken in German foreign policy in order to re-establish relations between Turkey and Germany as the positive atmosphere and constructive outcome of the most recent Gabriel – Cavusoglu meeting demonstrates.