Both the approval of possible patriot sales to Turkey and the U.S. withdrawal from Syria will have a direct effect on the foreign policy of Ankara in the short and long term. Hence, these two events have been observed as a triumph for Erdogan. 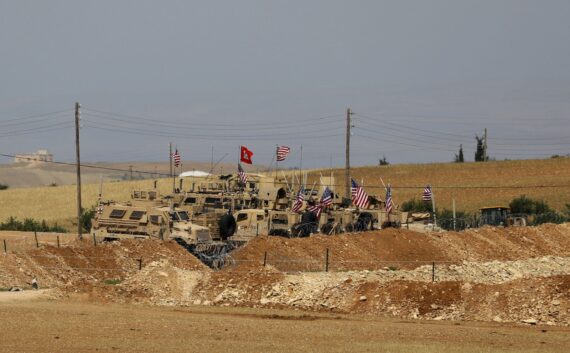 A picture taken on May 8, 2018 shows vehicles of the US-backed coalition forces in the northern Syrian town of Manbij. Getty Images

Although the Turkish administration is still very cautious, Trump’s decision to withdraw troops from Syria has been echoed for the government in Ankara and for Turkish foreign policy on an international level.

There is more than one perspective on the U.S. decision to withdraw troops from Syria – a decision that was taken by President Trump on Wednesday. The reaction from the region and the U.S. reflects the two sides of the equilibrium. While Russia, Iran, and Turkey are happy about the decision, European countries such as the UK, France, Greece, and Israel are having a hard time digesting the decision. As stated by Ibrahim Kalin, spokesman for the Turkish President, Turkey is still cautious about the decision.

On Wednesday, Trump tweeted, “We have defeated ISIS in Syria, my only reason for being there during the Trump Presidency.” According to Trump himself, the decision was not a surprising one. Commenting in Twitter again on Thursday, he tweeted, “Getting out of Syria was no surprise. I’ve been campaigning on it for years, and six months ago, when I very publicly wanted to do it, I agreed to stay longer. Russia, Iran, Syria & others are the local enemy of ISIS. We were doing there work. Time to come home & rebuild. #MAGA.”

Not everyone in the U.S. administration supports Trump’s decision either. Some republicans strongly oppose the decision and criticized Trump for strengthening the hands of Russia and Iran, who are defending the Assad regime. According to some U.S. officials that spoke to Reuters on confidentiality, U.S. commanders in Syria are worried about a ‘quick’ withdrawal.

Just a day after Trump announced his decision, Turkish President Erdogan and Iranian President Rouhani came together in Istanbul with the invitation of Erdogan and emphasized that both countries will work closer together in order to end the war in Syria and to start building a political process.

Although the meeting between the two leaders had been arranged earlier, the ‘move’ was considered meaningful and was supported by Russian President Vladimir Putin.

Both leaders decided not to make any comments on Trump’s decision.

During their press conference in Ankara, Erdogan found it sufficient to comment “There are many steps that Turkey and Iran can take together to stop the fighting in the region and to establish peace,” while Rouhani said “Syria’s territorial integrity must be respected by all sides. Both countries are in the same opinion regarding this.”

Both the approval of possible patriot sales to Turkey and the U.S. withdrawal from Syria will have a direct effect on the foreign policy of Ankara in the short and long term. Hence, these two events have been observed as a triumph for Erdogan.