Turkey and the UAE: Economic Allies but Regional Competitors?

While Saudi Arabia and the UAE form the so called “axis of the status quo" promoting authoritarian regimes, Qatar and Turkey work together in the “revolutionary axis" supporting popular democracy movements in the Middle East. 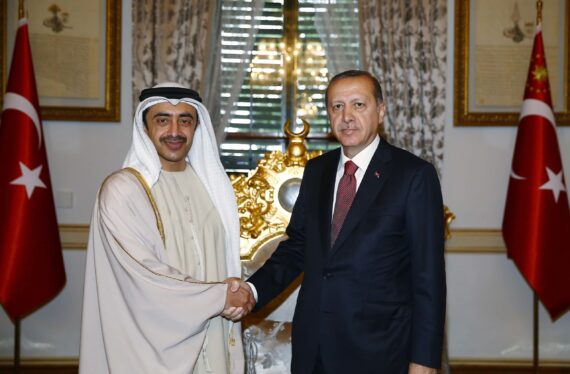 During an interview with the Saudi newspaper Asharq al-Awsat on October 28, 2017, Steve Bannon named Turkey as the biggest threat to the US. While this approach has many reasons, it is not independent from the influence of money from the Persian Gulf. The United Arab Emirates (UAE) is said to have supported Steve Bannon financially and the UAE is considered to be Turkey’s biggest and yet mostly ignored political competitor in the Middle East.

While the international focus is more upon the rivalry between Qatar and Saudi Arabia, the rivalry between Turkey and the UAE is more decisive. Turkey as a non-Arab state with the cultural heritage of the former Ottoman Empire and the UAE as the bastion of authoritarianism and symbol for an extremely luxurious lifestyle, are two actors that combat each other on every political stage from Europe, Africa to the Middle East.

While Saudi Arabia and the UAE form the so called “axis of the status quo” promoting authoritarian regimes, Qatar and Turkey work together in the “revolutionary axis” supporting popular democracy movements in the Middle East.

Turkey and UAE relations before the 2011 Arab Uprisings

Turkey – UAE relations have not been so important in the past, and it is fair to state that both sides only met each other following the Arab uprisings in 2011. Turkey on its part mainly focused on the European Union and the United States before the AK Party came to power in 2001. As a NATO member, Turkey had played its important role in the alliance, mainly taking into account regional western interests. Political and economic relations with Middle Eastern countries were present, but Turkey’s main focus was on the west.

On the other hand, the UAE mainly focused on internal issues and had an international policy advocating diplomacy and diplomatic solutions – it still views foreign policy from the prism of domestic issues. Before the Arab uprisings in 2011, the UAE had invested in relations within the Gulf Cooperation Council (GCC) and even tried to solve its dispute with Iran over three islands with diplomacy in order to avoid a political crisis with Tehran. In 1980, the UAE mediated between Egypt and Libya on one side and Oman and South Yemen on the other. Until 2011, the UAE tried to stay neutral on the international stage while focusing on its own economy. One important exception was the oil-crisis in 1973 when the UAE sided with Saudi Arabia. Turkey and the UAE have both become more involved in regional affairs with their new economic stability. All in all, there was hardly any economic interweaving between the two countries.

Rivalry after the Arab Uprisings

The rivalry between Turkey and the UAE has intensified since the Arab uprisings. While Turkey positioned itself as one of the most important supporters of popular conservative movements that favor democracy in the Middle East, the UAE has taken the side in support of established authoritarian regimes as part of counter measures. Turkey’s position also meant support for the Muslim Brotherhood, which also enjoys popular support throughout the Middle East. While Turkey had Qatar on its side, the UAE strengthened its position with the help of Riyadh. This rivalry is evident all over the Middle East.

What the UAE fears most is democracy, as this would question the authoritarian system of rule in the country. A survey conducted by the Washington Institute think tank at the end of 2014 illustrated that the Muslim Brotherhood is rated positively by around one-third of the population in Gulf countries.

Contrary to popular opinion, the Arab uprisings are not yet over. While one may argue that this battle between the two axes of Sunni Muslims in the Middle East may be unimportant now, it is simply the opposite.

The rivalry following the Arab uprisings has seen its pick in Egypt. The UAE rejected the Morsi government and supported the Abdelfattah Sisi military coup-government, while Turkey supported the democratically elected Morsi government (the first ever democratically elected government in the history of Egypt). The ambassador of the UAE in Ankara went back to the UAE for ‘holidays’ and didn‘t return to Turkey until 2016. The political conflict in Egypt is permanent and still ongoing, especially as Turkey still rejects political relations with the Sisi regime and the UAE continues to provide financial support.

Another important point was the coup attempt by Gulenist criminal cult members on July 15 last year, which was prevented due to massive opposition from the people and police in Turkey. The oil-rich sheikhs in the UAE allegedly funneled $3 billion to the Fetullah Terrorist Organization (FETO) in order to encourage them to destabilize Turkey from within. Additionally, leaked e-mails from Yousef Al-Otaiba, UAE ambassador to the United States, revealed that the UAE could have been involved in the coup attempt of July 15. More, during the Qatar crisis, the UAE positioned itself as a pioneer of Qatar’s isolation, while Turkey expanded its military presence in Qatar and supported the government.

The conflict also spilled over to Libya, where a Muslim Brotherhood-led government was formed after the coup against Muammar Gaddafi in 2011. Turkey, which keeps good ties with the powerful leadership of Misrata, which mainly forms the military operations room “Bunyan al-Marsous” for the government in Tripolis, was dragged into a confrontation with General Khalifa Haftar. With the help of Egypt and the UAE, in 2014 Haftar established a rival administration in Tobruk, which challenges the internationally recognized “unity government.” While Turkey and Qatar never directly intervened in Libya, Egypt and the UAE did. Besides warplane raids in support of Haftar, the UAE and Egypt have and still continue to arm Haftar militias. In addition, with the cooperation of France, the UAE established a military base in Haftar-controlled territory.

Turkey has built a military camp in Somalia in order to train up to 10,000 Somalian army soldiers. Turkish aid organizations, a Turkish hospital in Mogadishu and educational opportunities for Somali civilians have given Turkey a prominent position in Mogadishu. The Turkish company Albayrak manages the Mogadishu seaport. Like Turkey, the UAE is also pursuing similar contacts in Somalia. More interestingly, the UAE is again undermining an internationally recognized government this time in Mogadishu. It supports the self-declared state of Somaliland that competes with Mogadishu for control over the strategic north of the country, which oversees the Gulf of Aden.

While the base is still being constructed in Berbera, located 100km north east of the capital, Hargeisa, UAE ships have already started docking at its deep-water port.

As both countries decided to separate business from geopolitics, despite political controversies, financial relations between Turkey and the UAE seem to be positive. Both countries are certainly increasing their exchange within the defense industries. The UAE has purchased many armament products produced in Turkey and the two have signed a contract to increase cooperation in defense industries. The UAE, alongside Saudi Arabia are the main clients of Turkish armament products.

During the International Defence Exhibition & Conference in Abu Dhabi at the end of February 2017, the Turkish company Otokar signed an agreement with the armed forces of the United Arab Emirates for the construction of an armored infantry vehicle of the Arma 8×8 type with a value of 661 million US dollars. One of the main reasons for the UAE to buy weapons from Turkey is the price-quality index. While Turkish armament products fulfil NATO-standards, they are much cheaper than products of other NATO members.

Relations between Turkey and the UAE are complicated. While both sides have relatively good relations with each other, the regional power struggle over influence in the Middle East will shape future relations. While Turkey can be described as a successful democratic project in the Middle East, which is questioning authoritarian regimes in the region, the UAE fears nothing more than democracy. The hidden competition between both sides is more decisive than the competition between Qatar and Saudi-Arabia. From Somalia, Libya, Europe to the Gulf, the UAE and Turkey have different agendas. Nevertheless, due to gains that can be made in defense industries, both sides try to maintain satisfactory bilateral relations.