Turkey’s “allies” that arm, train, and protect the PKK may keep the group safe in some zones for some time, but this was not enough to stop Turkey in Afrin and may not be enough in the next battleground. 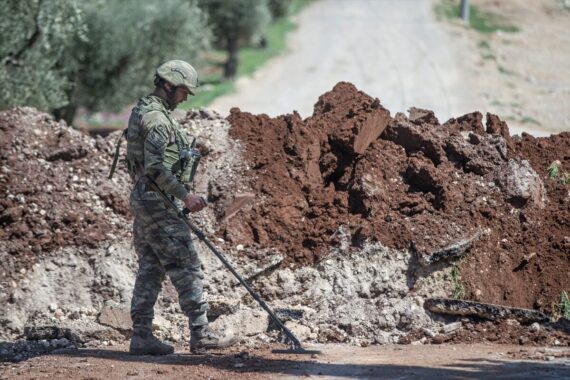 Middle Eastern politics is boiling once again. The rumor is that France will replace U.S. troops in Syria. While there are some signs of this, these are ambiguous at best. U.S. President Trump said in a speech in Ohio that the U.S. will be getting out of Syria “very soon.” On the other side of the Atlantic, French President Macron met with a delegation of the Syrian Democratic Forces (the late brand of the PYD) and declared his support for the organization. Pro-PKK sources even claimed that in the meeting Macron promised to send troops to prevent a further Turkish “aggression” against the SDF. Of course, many questions regarding this replacement scenario remain unanswered. Did Trump really mean what he said? Can he really pull troops out of Syria given CENTCOM’s years-long investment in the PYD/SDF? Can Macron really send troops to Syria? Even if he does, would they be just symbolic forces or can France really take the risk of a military encounter with other forces on the ground, particularly with Russia, given the recently heated relations between Russia and NATO? Hence, such a replacement in the near future is not probable, but possible. Anything is possible in the contingent world of politics anyway. Nevertheless, from Turkey’s point of view, such scenarios are worth attention but no more. Even if it happens, which is still not and may never be on the horizon, it is not a game changer for Turkey.

Regardless of which country arms and protects the PKK’s offshoot in Syria, Turkey seems to be decisive in its struggle to counter the PKK threat beyond its borders. Turkey’s Afrin offensive has resulted in the quick demise of the PKK’s Afrin project. Nevertheless, Afrin is just the first step of a more comprehensive offensive against the terrorist organization. For Turkey, the PKK has to be cleaned off from the areas it currently holds in Iraq and Syria. Turkey’s western allies might have difficulty to understand the country’s rationale, but to put it simply, Ankara does not want the PKK to send suicide bombers across the border from Iraq or Syria. The organization has cost thousands of lives in Turkey and it is time to terminate the group once and for all. If the PKK is terminated, that’s not going to happen in Turkey. The terrorist organization does not have any arms depots, school or training camps in Turkey. The PKK’s 40 year-long bloodshed did not suffice it to take a single village in Turkey. Conversely, the organization entirely resides on territories in Iraq and Syria.

The PKK’s headquarters, training camps and arms depots all are in Iraq and Syria. All the territories that the organization controls are beyond Turkish borders, whether it be Qandil, Sinjar, Manbij, or Haseke. The organization trains its recruits in camps in Iraq and Syria and sends them to Turkey through the territories that it controls. The PKK even runs schools in these places where it teaches children the “heroic” act of killing Turks. With the fall of Afrin, the organization will no longer be able to teach children in the city to be “heroes” by joining the PKK. Elementary schools in Afrin will no longer have the pictures of PKK leader Abdullah Ocalan on its walls or in school textbooks. The city will no longer hold ceremonies for the PKK’s suicide bombers who both killed and died in Turkey. Afrin was just one of the PKK’s recruitment and training centers. Turkey is persistent to handling the rest of these arms depots, recruitment and training centers, and its entire organizational network and military capacity one way or another. Turkey is more dedicated than ever to counter the PKK wherever it seeks shelter, whatever name it makes up to call its offshoots, and whichever country it receives support from. The question is not whether it will, but when and where. Turkey’s “allies” that arm, train, and protect the PKK may keep the group safe in some zones for some time, but this was not enough to stop Turkey in Afrin and may not be enough in the next battleground.