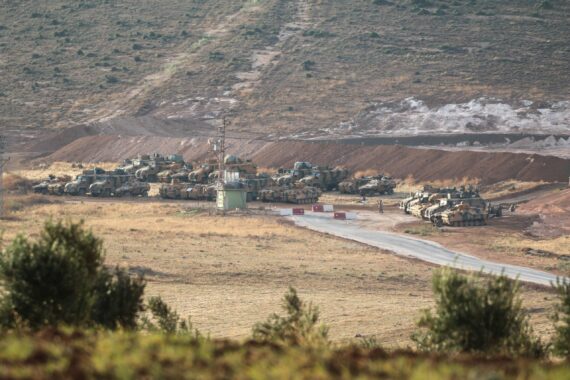 Turkish Army's armoured vehicles are seen at Reyhanli border due to the transition to Idlib, de-conflict zone, in Hatay, Turkey on October 9, 2017. Anadolu Agency

During the Astana talks, guarantor states Russia, Turkey and Iran signed a deal in order to establish de-escalation zones in Syria.

The three guarantors, as well as representatives of the Assad regime and some opposition factions, met in Astana in September 2017 for a sixth round of talks, aimed at ending the six-year conflict in Syria.

Following the decision made during the latest meeting, Turkey has positioned elements of the Turkish Armed Forces (TSK) within the borders of Idlib in order to reduce the tension in the region.

“The matter on Idlib is we have arrived at an agreement in Astana because we want to prevent conflict in these areas through a de-conflict zone.”

Emphasizing the importance of the Astana process, the Minister said that the aim of the Turkish government is to “revive the Geneva process.”

In addition to statements made by the Foreign Minister, Turkish President Recep Tayyip Erdogan also emphasized Turkey’s commitment to solving the crisis in Syria.

The President stated that if Turkey had not intervened in Idlib “bombs would fall on our cities.”

During an AK Party meeting, Erdogan told members that “Our efforts in Idlib are going on, in cooperation with the Free Syria Army, without problems at the moment.”