Turkey, Russia and Iran agreed on the establishment of a constitutional commission in Syria

Yesterday in Geneva, Foreign Ministers of Turkey, Russia and Iran - Mevlut Cavusoglu, Sergey Lavrov, Muhammad Javad Zarif - agreed upon the establishment of a constitutional commission of which the composition is yet to be set. 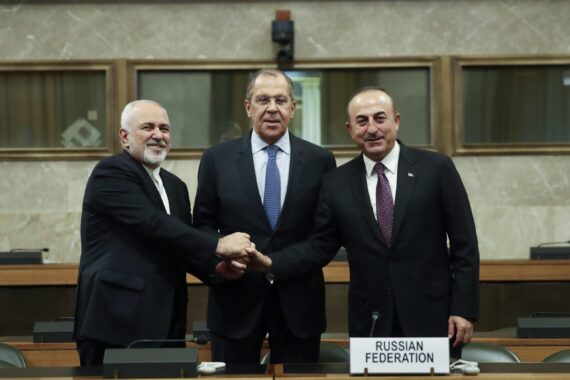 Minister of Foreign Affairs of Turkey, Mevlut Cavusoglu (R), Minister of Foreign Affairs of Russia, Sergei Lavrov (C) and Iranian Foreign Minister Javad Zarif (R) pose for a photo during a meeting to discuss setting up a committee to draft a new constitution as part of talks on Syrian crisis at United Nations Office in Geneva, Switzerland on December 18, 2018. Anadolu Agency

Yesterday in Geneva, Foreign Ministers of Turkey, Russia and Iran – Mevlut Cavusoglu, Sergey Lavrov, Muhammad Javad Zarif – agreed upon the establishment of a constitutional commission of which the composition is yet to be set.

Russian Foreign Minister Sergey Lavrov read the joint statement after the three ministers met UN Syria peace envoy Staffan de Mistura yesterday in Geneva, Switzerland. The statement emphasized that the agreement will be oriented “by a sense of compromise and constructive engagement.”

Turkish Foreign Minister Cavusoglu said that the three countries have reached an important phase in the establishment of the commission, which will write the future constitution of Syria, speaking to the press after the meeting.

Cavusoglu stated that there is no disagreement on the names proposed by both the Syrian regime and the opposition; he added “However, there are some differences of opinion on the list of non-governmental actors. In this matter, as the guarantor states we are working with the United Nations.”

Cavusoglu added that the three ministers also discussed the rules of procedure of the constitutional commission and said “In what percentage the commission has to take decisions, two-third or more, will there be a president or will he have deputies, will there be a co-president. We have discussed these kind of issues. So, we are coming towards an end gradually.”

Highlighting the intensifying efforts of the three countries in order to establish the commission as soon as possible, Cavusoglu said, “We anticipate that the first meeting of this commission will take place in the first month of next year. As the Astana guarantors of the process, we will continue the process by intensifying our efforts. In this regard, today’s meeting has been very productive. We hope that these meetings will bear best results for the political solution and the future of Syria. As an important actor, we (Turkey) will continue to retain our contribution to the process.”

On the other hand, according to Sputnik News, spokesman for the Iranian Foreign Ministry – Bahram Qasimi – told Tasmin news agency that if the military operation, which Turkey wants to initiate towards the YPG/PYD in north of Syria, starts without the consent of the Syrian regime, the application of the agreements that have been agreed upon in Astana process will be difficult.

Meanwhile, speaking to Asharq Al-Awsat newspaper, Siban Hamo – the leader of YPG in northern Syria – said that Russian officials are pleased with Turkish threats to the U.S.-backed YPG in northern Syria and complained that the Syrian regime is not doing anything to defend its northern border. Hamo added “Turkey is seeking through all means to eliminate the gains made by the YPG and has mobilized its troops on the border and bombed terrorists inside Syria. We are ready for a joint action (with Syria) to deter Turkey.”

While Turkey is waiting for the ‘moment’ to start its military operation against the YPG controlled areas in Northeast Syria, Sputnik News reported that the one of the commanders of the Syrian Peshmerga under the autonomous Kurdistan administration in north of Iraq – Badal Bandi – stated that their forces will move to Syria soon.