Turkey-US relations as the latest victim of Trumpian foreign policymaking

President Trump’s domestic agenda has driven the foreign policy agenda while he makes little effort to synthesize the two. In this sense, “America First” has come to mean undermining America’s alliances if it served the administration’s domestic political agenda. 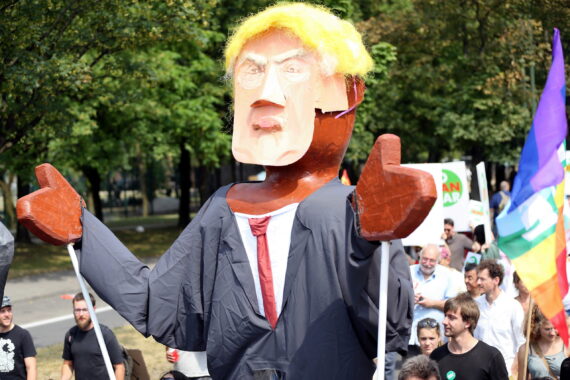 Turkey-U.S. relations are at a new low and it should not come as surprise to anyone that Trumpian foreign policymaking has a lot to do with it. It was less than a month ago that President Trump snubbed most European leaders in a NATO summit in Brussels and seemed to have a warm relationship with President Erdogan, symbolized by the now famous fist bump.

Yet within a month, Trump has given Turkey an ultimatum over the Brunson case, clearly trying to satisfy his Evangelical supporters. As Erdogan refused to bow down to such pressure, Trump announced the doubling of tariffs on Turkish steel and aluminum that had been imposed earlier this year. Trump was not only impatient with the legal process but also bypassed diplomatic talks between Ankara and Washington, which were designed to resolve the outstanding legal issues between the two countries. As a result, the Turkey-U.S. relationship has become the latest victim of Trumpian foreign policymaking.

This is not the first time that the President has attacked an ally with an eye to retain or increase domestic support on a given issue. Trump attacked Mexico based on his immigration agenda while imposing tariffs on Canada as a result of his economic agenda at home. He threatened to impose tariffs on European imports, which seems to be on hold for the moment after European leaders convinced Trump to work on a new trade agreement.

Trump continues to threaten allies with sanctions for doing business with Iran based on his campaign promise to rip apart the Iran deal, which he did. In all of these instances, President Trump’s domestic agenda has driven the foreign policy agenda while he makes little effort to synthesize the two. In this sense, “America First” has come to mean undermining America’s alliances if it served the administration’s domestic political agenda.

Similarly, President Trump has questioned the very institutions that the U.S. has helped build since the start of the Cold War, including NATO – undermining perhaps the most important institution for U.S. global leadership. Trump’s relentless attacks on NATO were meant to serve his nationalist domestic agenda. The reduction of the debate on NATO’s global role and mission to a budgetary matter, often expressed in terms of financial contributions of member states, was a message to the domestic audience that the U.S. would insist on everybody paying their “fair share.” This message could resonate with a constituency sensitive to government spending and skeptical of the U.S.’ global role. It also sends a message that international organizations are there to serve, first and foremost, U.S. interests rather than sustaining an international system.

Trumpian foreign policy will have long-lasting implications for the global system as well as America’s alliances with countries like Turkey. Turkey is already faced with monumental challenges emanating from the regional instability caused by civil wars in Iraq and Syria. Turkey has also been a strong advocate of international institutions like the UN and NATO assuming larger responsibilities to achieve stability in the region. The U.S., however, chose a unilateralist path under Trump, eroding the effectiveness of multilateral institutions.

Despite these realities, Turkey was working with the U.S. in order to find a resolution to outstanding legal issues between the two countries through diplomatic channels. But the Trump administration’s sanctions and tariffs on Turkey, motivated by domestic political calculations, make it impossible to repair the relationship in the short term.

Trumpian foreign policy will continue to damage U.S. credibility and standing within its allies as well as its competitors. While U.S. allies like Europe and Turkey are going to struggle to effectively address these challenges, they are unlikely to simply roll over. The clear message from the Turkish leadership in the latest currency crisis was that Turkey would not give in to unreasonable demands. Clearly, this is not a desirable state of affairs between two NATO allies, but it is the reality of a new era in which the U.S. government does not hesitate to punish its allies and undermine the very institutions it helped build over decades. Even if the Turkey-U.S. relationship is somehow put back on track, Trumpian foreign policy will continue to introduce much instability into the international system for the foreseeable future.

Also Read
Can A Third Political Party Bring Change in US Foreign Policy?