Brunson’s return to the U.S. and President Trump’s hosting of the pastor in the oval office with high level administration officials sends a strong message to the Evangelical base ahead of the midterm elections in November. Not that Trump risked losing the support of the Evangelicals, but Brunson’s return gives his standing with Evangelical supporters a big boost. 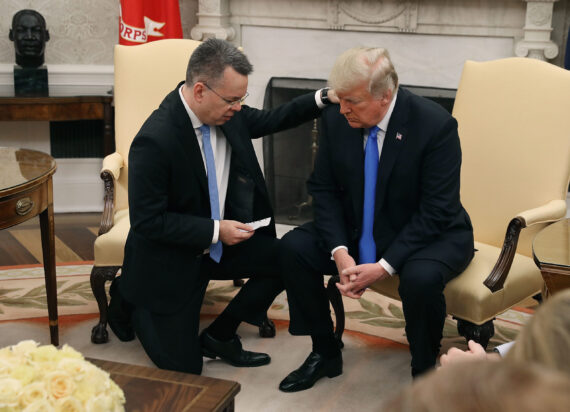 : U.S. President Donald Trump and American evangelical Christian preacher Andrew Brunson (L) participate in a prayer in the Oval Office a day after Brunson was released from a Turkish jail, at the White House on October 13, 2018 in Washington, DC. Getty Images

In the first year of President Trump’s tenure, Turkish-American relations went through what we can call a period of “sizing up,” as hopes for a new beginning were somewhat moderated by strategic challenges. The Trump administration had inherited the Obama policy of supporting “local forces” (read YPG) against Daesh with no U.S. boots on the ground save for the “military advisors.” Turkey was patient in Trump’s first year to allow the administration some time to re-evaluate the mission and start working with Turkey instead of the PKK’s Syrian branch. When it became clear that the Trump administration would settle on the same policy, Turkey launched a military operation in Afrin to ensure the YPG forces would not go west of the Euphrates river.

The serious divergence on the ground in northern Syria has continued, but efforts to put the U.S.-Turkey relationship back on track also continued, as outstanding legal cases (Brunson and Zarrab cases) were compartmentalized away from broader policy questions. However, the pressure from the Evangelical base of the Trump administration led to an ill-timed ultimatum by President Trump and Vice President Pence, resulting in yet another bilateral crisis.

As a result of the pressure, the U.S. imposed sanctions against Turkish ministers and additional steel and aluminum tariffs, a first against a NATO ally. These measures appeared to be largely symbolic, but they had a serious impact on the Turkish Lira’s devaluation against the U.S. dollar. As Turkey refused to bow down to such economic pressures, the relationship came to the brink of total breakdown. Clearly, the Brunson case was a major catalyzer in this process, but the underlying strategic disagreements and the already existing mutual distrust has created a fertile ground for a major crisis.

With the Turkish courts deciding to release Pastor Brunson last week, however, an important new phase might just be starting in the bilateral relationship. Brunson’s return to the U.S. and President Trump’s hosting of the pastor in the oval office with high level administration officials sends a strong message to the Evangelical base ahead of the midterm elections in November.

Not that Trump risked losing the support of the Evangelicals, but Brunson’s return gives his standing with Evangelical supporters a big boost. Turkish leadership has maintained the legal process played itself out and both sides insisted there was no specific deal. We should note that there does not need to be a deal for this development to have a positive impact on the U.S.-Turkey relationship.

The fact that a legal case derailed the relationship between two NATO allies should give everyone a pause. It underscores the complexity of the strategic environment in Turkey’s immediate neighborhood and heightened security concerns Turkey feels as a result of U.S. policies in the region. President Trump’s positive remarks about Turkey reflect his concern over his standing with the Evangelical voters, but this will not be enough for a broader strategic conversation between the U.S. and Turkey.

The recent changes in the U.S. Syria policy have given at least a limited amount of reassurances to Turkey that its interests would be taken into consideration more carefully. The U.S. rhetorical support for Turkey against an imminent military operation against Idlib was a welcome development in this sense. Yet, without a more comprehensive policy coordination between two sides, the mutual skepticism will continue, especially as the U.S. continues to support the YPG.

The upside for the relationship is that the “sizing up” period may be over and both sides are much clearer about their positions. The ambiguities regarding northern Syria as well as the uncertain fate of the Brunson case are no longer excuses for the lack of an honest dialogue. The regional crises will almost certainly create new challenges and the U.S.-Turkey ties will be tried. The lesson from the Brunson case is that Turkey will not bow to threats and pressures, and that the U.S. will need to pursue diplomatic options instead. Going forward, a talk-first-shoot-later approach will have to win for a healthier U.S.-Turkey relationship.