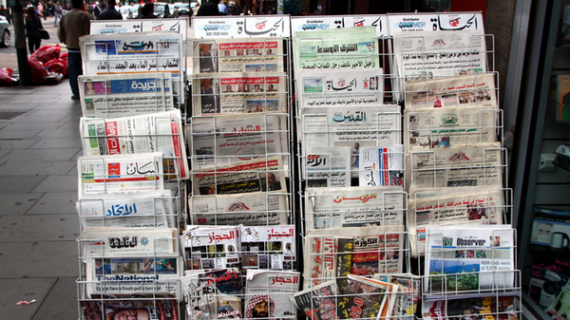 The daily published a picture of Syrians waving a banner reading “We back Turkish military operation to shield our people from PYD terror”.

The Qatari Raya newspaper cited Erdogan’s criticism during a recent party conference of U.S. plans to create a PYD/PKK force in northern Syria.

The daily said Ankara has informed Damascus of its military operation in Afrin and cited Erdogan’s statements that the operation will include Manbij.

The Saudi newspaper pointed out to the Turkish military’s statement that the operation aims to achieve “security and stability” along the Turkish border and in the region and end the presence of PYD/PKK and Daesh in Afrin.

Bahraini newspaper Al-Ayam cited Turkish Foreign Minister Mavlut Cavusoglu’s statements that the operation “only targets terrorists” and that Turkey “has informed all sides of what we are doing”.

The Kuwaiti daily Al-Rai headlined “Turkey launches Olive Branch against the Kurds of Afrin and ‘angry’ Russia … withdraws its soldiers”.

“Erdogan: Manbij will be next … and gradually we will clear the borders of this terrorist filth,” reads another headline by the daily.

Go to Top
Also Read
What are the Implications of America’s New Syria Policy for Turkey?