Turkish security units tracked down the 15-member hit squad who are responsible for the murder. It’s due to Turkey’s developing surveillance culture and utilization of security camera networks that allowed the police to figure out the details of the killing, which was later – as they had no choice – admitted by Saudi authorities. 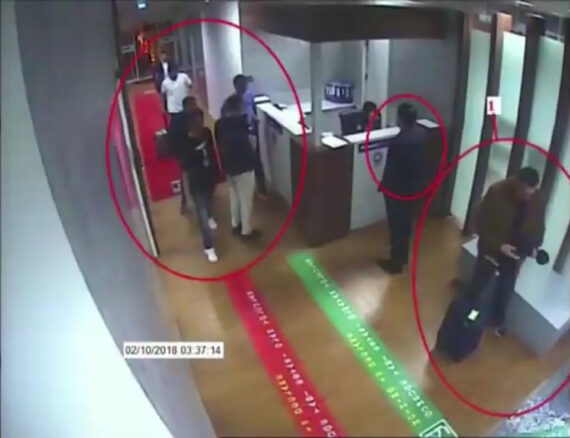 A frame grab on October 10, 2018 taken from a police CCTV video made available through Turkish Newspaper Sabah allegedly shows suspects in the case of missing Saudi journalist Jamal Khashoggi (unseen) at Istanbul's Ataturk airport on October 2, 2018. - Jamal Khashoggi, a veteran Saudi journalist who has been critical towards the Saudi government has gone missing after visiting the kingdom's consulate in Istanbul on October 2, 2018, the Washington Post reported. Saudi Arabia agreed to let Turkish authorities search its Istanbul consulate as part of the investigation into the disappearance of journalist Jamal Khashoggi, as his fiancee asked Donald Trump to help uncover what happened to the Riyadh critic. (Photo by - / Sabah Newspaper / AFP) (Photo credit should read -/AFP/Getty Images)

The murder of Jamal Khashoggi at the Saudi Consulate in Istanbul has revealed the truth about “surveillance culture” in Turkey. During the investigation phase of the incident, many noticed that Istanbul has a widespread network of security cameras that either belong to official security units or private owners. This network of security cameras was the most important instrument that helped the police and intelligence officials to determine the fate of the Saudi journalist after he entered the Saudi Consulate and could not leave. Investigators revealed the details of how the Saudi hit-squad of 15 men mobilized before, during, and after the unfortunate incident that took place on 2 October.

As the events unfolded, the Saudi officials claimed that their camera system was not working on that days, causing serious suspicions regarding their role in Khashoggi’s disappearance. In the aftermath of these claims, following a thorough analysis on the security camera network around the consulate, Turkish security sources were able to confirm that Khashoggi never left the consulate building. Soon after this information was made public, the Turkish media reported that the police have the visual and audio evidence of how Khashoggi was brutally murdered inside the Saudi Consulate on that day.

The use of surveillance cameras that belong to security services and privately owned units reveal that there is a well-established culture of electronic security systems in Turkey. This culture has been growing rapidly since the early 2000s. In this regard, Turkey is one of the best-equipped countries in its neighborhood, including many EU member states.

This surveillance culture has played a crucial role in the prevention of crimes, the detection of criminals and the security of the general public. For instance, there are around 7000 security cameras that belong to the City Security Management System of the Istanbul Security Directorate. The existence of these cameras play a crucial role in securing the largest city in Turkey, Istanbul, which has a population of around 17 million. In addition to this, Istanbul’s security is also ensured with around a 100,000-strong network of security cameras in local municipalities, shopping centres, offices, housing units, social facilities, parking lots, and public transportation vehicles.

Security camera network in Turkey is not only limited to Istanbul. Many metropolitan cities throughout the country are equipped with an extensive network of security cameras. On the other hand, security camera systems used in houses and workplaces have also been increasingly popular for individuals and companies. In most cases, these systems provide instant viewing and archive data for a specific period. While such systems are becoming more common in Turkey, they still stand around 2%, while in countries such as the U.S., this rate is 20%. However, it’s important to bear in mind that while the global market of security camera networks has increased around 7%, this rate is 10% for Turkey.

With the increasing success in Turkish security and intelligence units, terror groups have been pressured more than ever before and thus are discouraged from organizing attacks. More, their capacity has also collapsed due to the complex defense instruments that are utilized by security forces.

A concise and wide network of security cameras is also a factor that prevents crime. Terrorist organizations and criminal networks that are aware of these intense electronic security measures have been unable to operate as they used to. With the increasing advancement that comes with such technological capability, it has become easier to identify individuals that commit such crimes or terrorist attacks.

The most recent example of this occurred with Jamal Khashoggi’s murder. Turkish security units tracked down the 15-member hit squad who are responsible for the murder. It’s due to Turkey’s developing surveillance culture and utilization of security camera networks that allowed the police to figure out the details of the killing, which was later – as they had no choice – admitted by Saudi authorities.