If the regime and Russian military campaign goes beyond a limited military intervention and turns into a full-scale military assault in Idlib, then two major developments should be expected. The first one is the radicalization of the moderate armed groups against Russia and the Syrian regime, and the second is the alienation of Turkey from the Astana process, which might bring more cost for Russia. 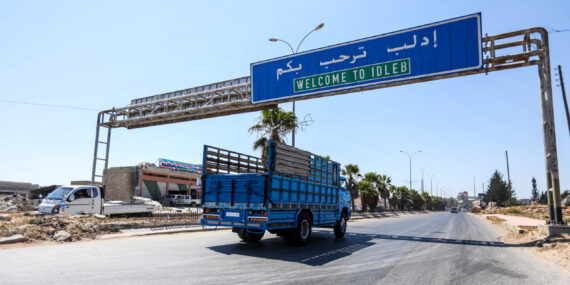 A truck drives past underneath a sign along the highway leading to the rebel-held northern Syrian city of Idlib on August 25, 2018. Getty Images

Idlib, the last stronghold of the military and political opposition, is becoming a new episode for the seven-year-old Syrian Civil War. While the Syrian regime and Iran-backed Shia militias are planning a military offensive against the opposition in Idlib, where approximately 2,9 million people including internally displaced people live, Russia has puzzling hesitations whether the military option would bring a solution or produce more chaos for the Russian strategy in Syria.

“A military solution here would be a disaster, not just for the Idlib region, but a disaster regarding Syria’s future,” Mevlut Cavusoglu, the Turkish Foreign Minister, told a news conference in Moscow with his Russian counterpart Sergei Lavrov. However, Turkey’s priorities in reaching a peaceful solution for Idlib are becoming more difficult and complicated to achieve due to the nature of the conflict in the region.

The dynamics of geopolitical competition among the regional countries and Turkey’s self-capabilities are in test vis-a-vis overcoming Ankara’s strategic anxieties on the ground, mainly to achieve what Russia and other international actors are expecting from Turkey’s military presence there and political engagement with the opposition groups in the region.

The deterioration of Turkish-American relations, in which both countries have divergent policies towards Syria – particularly in the eastern part of the country – is also creating more complexities for the future of the Idlib region, as well as Turkey’s difficult role in it. At this stage, the actors involved in the new Idlib turmoil have competing strategies and divergence policy options.

Turkey has twelve military observation points in the Idlib region to observe the de-escalation agreement in which Russia, Turkey, and Iran had agreed upon within the framework of the Astana summits. From the very beginning, Turkey started to establish military observation points in Idlib. Ankara safely delivered its security priorities in terms of increasing the number of military outposts across the Idlib region, preventing the radical groups, particularly Al-Qaeda affiliated ones, such as HTS, from getting more ground among the military opposition and remobilizing moderate armed groups under the framework of the National Army.

However, it is difficult to say that Turkey successfully de-integrated radical groups and eliminated their military capacity due to internal dynamics among the armed groups, the rigid ideological perception of the radical groups toward the peaceful solution in Syria and the military moves of the Syrian regime towards the opposition groups in the Idlib region. The HTS’s political and military mobilization in the area and its militant ideology was an extremely important obstacle in achieving Turkey’s original strategy.

At this stage, Turkey’s security priorities are shaped by many puzzling variables. As Ankara’s intensive diplomatic talks with Russia have demonstrated during the last two weeks, Turkey firstly aims to prevent the Syrian regime’s unilateral military intervention against the opposition groups. For Ankara, a large-scale military operation without distinguishing civilians from radical armed groups can create a new wave of instability in the region that would cause another conflict spill-over effect from Syria to Turkey.

The new mass refugee flow towards Turkey, together with the potential of an influx of radical fighters, can create another security threat for Turkey and can complicate the already existing massive refugee issue in the country. More importantly, there is a most-likely scenario that Turkish troops in the Idlib region intentionally or unintentionally can be targeted by any other third party and this might trigger the conflict between Turkey and other actors that are operationally involved in the Idlib war.

In addition to these security concerns for Turkey, strategically, the Idlib offensive apparently with the victory of the Syrian regime at the end of the day, can create real strategic pressure on Turkey’s military presence in the Afrin region where the Turkish forces defeated the PKK and ensured the Free Syrian Army’s military and political presence there.

The most important thing for Turkey’s strategic priorities is the continuation of its military presence in the region, especially within the western part of the Euphrates river. At this stage, it seems that Ankara and Moscow are continuing with their negotiations over the issue and that the Russian side is expecting for Turkey, before it’s too late, to achieve what they agreed upon in Astana.

The puzzle of the Turkish-Russian dialogue

While Turkey sees the potential Idlib conflict from the very center of its national and regional security priorities, Russia has a completely different agenda. The Russians see the military fall of Idlib by the Syrian regime as a tactical and operational issue, yet Moscow cannot be sure about the broader implications of the Idlib war across Syria -including the remobilization of militant groups, the continuation of the war, and destruction of the Astana agreement.

Ankara understands the Idlib war from the angel of a massive flow of refugees into Turkey, remobilization risk of radicals along its border, and the potential threat against its strategy of containing the PKK/YPG in the region. While Turkey can influence military oppositions, Russia is the only country that can contain the Syrian regime’s military operations against opposition groups in Idlib. From a realistic perspective, both countries are locked with a dilemma; the dilemma between choosing a strategy that relies on a war against the radical groups and maintaining peaceful negotiations with radical armed groups to dissolve their military structure.

At this stage, Ankara’s expectation is for Russia not to easily open the gate for a full-scale military campaign for the Syrian regime forces.  As Lavrov stated in the press meeting in Moscow, Turkey and Russia will continue to bring a diplomatic solution as they had agreed to apply for opposition armed groups in Aleppo last year. What Turkey and Russia agreed in their meeting in Moscow remains unclear, yet Russia proposed to Turkey some options both to eliminate the HTS, which is the most influential armed group (approximately 13. 000 fighters) inside the Idlib region and to bring a peaceful diplomatic solution. However, the realities on the ground are more complex than Turkey’s and Russia’s desire to eliminate HTS presence in a minimal time.

As the leader of the HTS Abu Mohammad al-Golani declared many times in his statements that they would not allow the Syrian regime military assault and demobilize their fighters. Rather than dissolving the group, the HTS member declared that they are “working hard to arrive to a useful solution in the liberated north.” More importantly, the very nature of the groups is complex; they are not composed of indigenous fighters and their ideological commitment to “revolution” is hierarchical and radical.

If Russia and Turkey can agree over a haven option in which the members (it is not possible to know how many fighters would leave the HTS in this process) can survive, then the Syrian regime military campaign may be out of option. This narrative is not limited to the HTS. There are also other armed groups that have an entirely different view toward the ongoing uncertainties.

Therefore, it is not clear whether the diplomatic dialogue will necessarily bring about a peaceful solution to the Idlib region and whether it will determine the status of the opposition. However, Russia and Turkey are still key actors who will determine the future of Idlib.

The U.S. factor in Idlib

While Turkey and Russia are the main determinant powers for the future of Idlib, the U.S. administration has indirect concerns regarding the situation in Idlib. However, three interrelated dynamics shape the U.S. perception towards Idlib.

The first is the probability of a chemical attack by the Syrian regime against the civilian population in Idlib. The U.S, France, and Britain released a joint statement regarding the military offensive of the Syrian regime against civilian and civilians infrastructure in Idlib by using chemical weapons. U.S. officials are particularly worried that the regime would turn to chlorine-filled helicopter-launched barrel bombs as it has in the past.

The second one is the potential strategic re-consolidation of Iranian influence through the Idlib offensive. The Syrian regime’s military power is heavily dependent on Iranian proxies to fight against opposition groups in the region. It is a critical topic since the Russians are unwilling to support the regime’s military assault. The U.S. administration sees an Idlib offensive as an opportunity for Iran to reconsolidate its military influence in Syria. This is especially important following the announcement of Iranian officials that Tehran agreed to a deal deepen military cooperation with Syria despite moves by the U.S. to contain Iranian military reach in Syria. This move also undermines the U.S.’s attempt to convince Russia to get rid of Iranian capabilities and to get Iranian fighters out of the country.

The third factor that shapes the U.S. understanding of Idlib is the possibility of a dissemination of radical armed groups across Syria – which would escalate another violent moment in the Syrian crisis. At this stage, it is difficult to say that the U.S. administration has an obvious policy option towards the situation in Idlib except that the U.S. wants to remain in contact with Russia and Turkey.

The future of Idlib remains unknown, but which actors will be determinant in shaping the already fragmented issue on the ground depends on their capability either to convince the self-disbanding radical anti-regime forces or to fight against them. It seems that Turkey has limited influence over the Al-Qaida affiliated armed groups to transform them peacefully. Ankara also does not want to fight against the radical groups at this stage unless Turkey is targeted by any of them.

The only way for the solution and to prevent a new political and security turmoil in the region is the evacuation of the radical armed groups from Idlib. It is hard to guess at this stage who can determine who is who regarding their level of extremism, yet Turkey’s and Russia’s intensive diplomatic attempts can bring a new way out from the Idlib elusiveness.

If this option does not work on the ground, then a limited military campaign against particular armed groups and especially HTS-led places in the Idlib region will be conducted by Russia and Syrian regimes forces. If this becomes the case, a limited refugee flow towards Turkey should be expected.

If the regime and Russian military campaign goes beyond a limited military intervention and turns into a full-scale military assault, then two major developments should be expected. The first one is the radicalization of the moderate armed groups against Russia and the Syrian regime, and the second is the alienation of Turkey from the Astana process, which might bring more cost for Russia. At this point, the upcoming summit between Russia, Turkey, and Iran in Tehran on September 7 will be of critical importance as it will determine the decisiveness of the three actors to maintain their consensus on a ceasefire and de-escalation zone, or to shape the future of the Syrian crisis.