A decrease in the amount of courses, an approach of education directed towards experience, increased workshop and laboratory studies and projects and implementation studies in field courses describe the main philosophy of the new model. 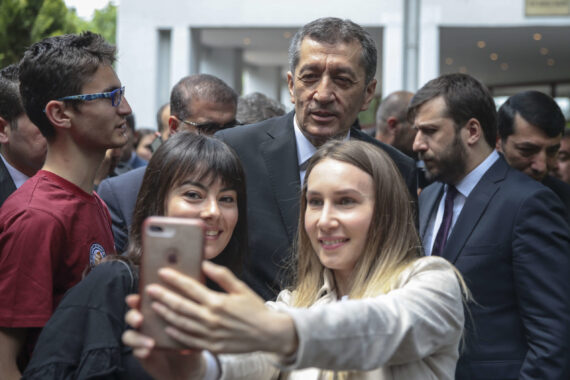 The new education model for high schools announced by the Turkish Ministry of National Education has received attention for its content that has been created via combining “universal” methodologies with domestic and national elements.

The Minister of National Education Ziya Selcuk, while sharing the details of the new model that will start being used in high schools following the enrollment of new 9th grade students in the 2020-2021 academic year, stated that the new model was developed with the contributions of teachers, students, academics, school administrators and international education experts.

The new model is based on the observation that “students took many courses in high school, but did not have enough time for research and implementation, and thus could not internalize the contents of their education.” To ensure the creation of education processes with lasting results, and to contribute to the development of the personal interests and talents of students, the new education model for high school has been supported by supra-disciplinary courses.

A decrease in the amount of courses, an approach of education directed towards experience, increased workshop and laboratory studies and projects and implementation studies in field courses describe the main philosophy of the new model.

Universal methodologies in the new system

Within this framework, while designing this new education model for high schools on which the ministry has been working for a long time, educational methodologies that have successfully been implemented around the world were examined one by one.

According to the information Anadolu Agency reporters received from education experts, the education methodologies used by many countries around the world were taken as reference.

The universal elements of the education methodologies that are in use today in countries in Europe, East Asia and in the U.S. can be seen in the new education model for high schools. These countries use a secondary education model that decreases course numbers with an integrated, supra-disciplinary course structure and provides students with effective career guidance, and the Turkish education system is expected to transition into using such a system.

The contents of the courses that will be included in the new model for high schools by the ministry will have “domestic and national” elements, alongside the use of these methodologies.

Emphasis on being domestic and national

The contents of the new system will be created by taking the structure of Turkish society into consideration, and subjects such as Turkish culture, history and geography will be presented with a rational approach. National literature and national scientific studies will also receive emphasis in the creation of the content.

Alongside the new course titled “Turkey in the 20th Century,” contents of the existing courses such as education on religious culture and ethics, Turkish language and literature, history of the Turkish revolution, and Ataturkism will be designed entirely via domestic and national approaches.

The content of these courses will be structured in a way that makes it possible for students to discover the culture, geography and economy of their country.

The development of students in fields titled “Imagination (artistic activities),” “Activity (physical activities)” and “Life (social benefit activities),” described together as “HEY” due to their initials in Turkish, is among the goals of the new system.

Another aspect of the new system announced by the ministry that has received attention is the “Information Theory” course that students will start receiving with in 10th grade.

This course, which is given to students in countries leading in education around the world under different names, is intended to give students “interdisciplinary and supra-disciplinary experience in questioning and learning regarding the nature of information and knowledge.”

With the Information Theory course that will be made mandatory for the 11th and 12th grades, the Ministry of National Education aims to make students focus on the nature of information and give them the ability to question how information is obtained.

While all academic courses are intended to be related to the Information Theory course, it has been emphasized that the course will also be helpful in giving students the ability to analyze and question information from sources that might be unreliable, such as social media and the internet.

All courses will be presented in an integrated manner

One of the most important aspects of the new model is the interdisciplinary education method which addresses the disconnection between the courses, relates all courses to each other and is being increasingly adopted around the world.

Thus, with the 12th grade, students will start making effective use of the information they acquired in primary school, middle school and the 9th, 10th, 11th grades and the skills they have acquired in design workshops.

In the new system, the 12th grade has been designed as a grade level where students decide on their preferences and careers through choosing suitable courses. The purpose has been to help students in making more determined and informed decisions regarding their university education.

The model used in China, where the course named “artificial intelligence application” is taught from kindergarten, was examined.

“Creative approaches to environmental problems” is among the courses that are given in almost every country. The content of this course that aims to help students internalize their knowledge through combining and integrating disciplines such as science, sociology, psychology, geography, economics has received attention.

New curriculum to be implemented alongside the training process for teachers

The new model will give heavy emphasis on the in-service trainings of teachers. Within this framework, in the next 1.5 years, the process of preparing the curriculum will happen together with the training of teachers.

Career offices to be established

In the new system, some options such as academics who have engaged in creative studies giving lectures in high schools are being considered.

With the career offices that will be established in each school to help students discover themselves throughout high school and effectively manage other stages of life they will be going through, students are projected to develop themselves within the framework of a more balanced curriculum via choosing their own elective courses.

In the new model, students will be expected to be on the “international level” regarding certain skills upon their graduation from high school, and for this reason, students will go through high school in a system focused on success.

Note: This news is first published in Turkish by Anadolu Agency on May 21, 2019.