Turkey’s Hunt for the PKK in post-referendum Iraq

As a result of its alliance with the US, the PKK expanded territories it captured and began to consolidate its territorial control in the Middle East. 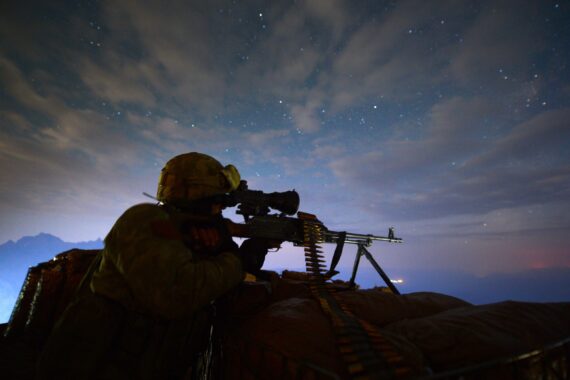 A Turkish soldier during an observation post at the operation site between Ikiyaka Moutains and Daglica, as the Turkish Armed Forces stage an operation against the PKK terrorists near the Iraq border, August 15, 2017. Anadolu Agency

Following the independence referendum proposed by the Kurdistan Regional Government (KRG) in Iraq on September 25, 2017, the governments of Turkey, Iran and Iraq have come closer to an unprecedented degree. This analysis will shed light on the post-referendum (and the post-Daesh) developments regarding Turkey’s hunt for the PKK, a terrorist organization that has been targeting Turkish security personnel and civilians for about four decades.

Following the referendum in September 2017, despite its close relations with the KRG, Ankara managed to build a trilateral bloc including Turkey, Iran and Iraq, while also leaving an open door for the less-hawkish and more realistic KRG politicians, such as the regional Prime Minister, Nechirvan Barzani. Turkey’s reaction to the referendum was not only based on the KRG’s unilateral decision, which Turkey saw, at best, as a sign of irresponsible partnership. Rather, Turkey’s primary concern in Iraq is the future of the PKK, which is already deeply rooted in the country, and which is seeking to increase its sphere of control. Hence, Turkey utilized the referendum crisis as an opportunity for a more effective alliance against the PKK, which is flourishing with the backing of prominent international sponsors in the context of the Syrian Civil War. For Turkey, this new alliance is more promising than what the Kurdistan Democratic Party (KDP) could have ever provided in terms of a final defeat of the PKK.

For Turkey, the new alliance with Iraq and Iran is more promising than what the Kurdistan Democratic Party (KDP) could have ever provided in terms of a final defeat of the PKK.

For a long time, the PKK was perceived as the winner of the turmoil in the Middle East. Following the Gulf Wars and the regime change that followed in Iraq, the terrorist organization secured itself safe havens in Northern Iraq amidst the power vacuums and buffer zones between the central and regional governments and neighboring countries. The civil war in Syria has also worked to this end for the PKK. The terrorist organization created some nicknames, or umbrella groups (Syrian Democratic Forces being the latest one) in order to carry out its operations and partner with the United States in Syria. Hence, the PKK expanded the territories it captured and began to consolidate its territorial control. As a reaction to this ever-growing threat over the past few years, Turkey shifted its policy goals in Syria to preventing the PKK corridor along its border. While Turkey carried out the Euphrates Shield and Idlib operations primarily for this reason, the main goal was to hit the PKK in its headquarters in Qandil, Iraq.

Nevertheless, Ankara faced a significant problem: Given the concerns shared by the central government and by Iran and the complex web of partnerships between the local and international actors in the region, Turkey’s close relations with the KRG did not permit Turkey limitless freedom for its operations in Iraq. In addition to a military alliance, Turkey has long developed a mutually beneficial relationship with the KRG based on economic cooperation over oil and construction businesses. In this complex web, the Turkish-KRG alliance (particularly with the ruling party, the KDP), was mostly limited to the provision of ground intelligence by the KDP in regards to the PKK and information regarding the organization’s bases in Turkey. In return, the KDP could rely on Turkish support against the PKK or even against a possible Patriotic Union of Kurdistan (PUK) aggression. While this relationship seemed to be a win-win situation for both Turkey and the KDP, the PKK’s growing influence in Syria required a more comprehensive reaction from the Turkish administration, which needed more than what the KRG was able to provide.

The PKK’s growing influence in Syria required a more comprehensive reaction from the Turkish administration, which needed more than what the KRG was able to provide.

As a country that witnessed the gains obtained by the PKK in each revisionist step in Iraq and Syria, Turkey backed the status quo in Iraq during the referendum process. Yet the problem was that each revisionist move in the past helped the PKK increase its influence by ensuring that it became part of the new status quo. The PKK not only found safe havens in its camps across the Turkish border, but also begun to rule areas via conscripting the locals to its own ranks by collecting tax and running schools and other public services from what it calls the “Medya Defense Zones” across the Turkish border down to the mountains across the Iranian border as well as a number of refugee camps, Mahkmur being the most famous one. Hence, the only revisionism that Turkey can tolerate in Iraq is one that will target the PKK’s presence in the country. While Turkey’s existing relations with the KRG provided some assistance to its target of the “Medya Defense Zones,” this move was far from wounding the PKK in a degree to question its chance of survival. The PKK’s ability to stretch its goals and motives to the Sinjar Mountains has made Turkey question the limits of its alliance with the KRG.

Given the American support for the PKK in Syria, and the organization’s attempts to control Sinjar in Iraq, Turkey felt the need to find a more effective alliance against the terrorist organization. While the referendum in September was the last thing Ankara could tolerate, it gave the governments of Turkey, Iran and Iraq a chance to work together. Based on this recent agreement with Iraq and Iran, Turkish military incursions against the PKK can take place in areas that Turkey could not previously operate in. Two examples that reflect this are the recent attacks on the PKK positions in Asos and Mahkmur – both areas are deep inside Iraq, sharing no proximity with the Turkish border.

The Asos area near the town of Mawat of Sulaymaniyah province is a continuation of the Qandil Mountains and cuts across the Iranian border. Turkey’s troubled relations with Iran and Iraq prevented it from carrying out operations in this area, which is 175 kilometers away from the Turkish border – enough for the PKK to comfort itself against Turkish security forces. Hence, the Asos area was a pretty safe-zone for the PKK at times when the organization was not in a hot conflict with Iran, particularly since the 2011 truce. However, the PKK’s comfort in this area has finally been driven to an end as Turkey began to target Asos in repeated bombardments throughout November. During air strikes, Turkish authorities claimed to have killed over 65 PKK terrorists along with destroying their arm depos. The PKK’s main media outlet Firat News also confirmed the attack and claimed that the specific coordinates of the bases were given to Turkey by Iran.

The recent Asos and Mahkmur attacks illustrate that Turkey is forming an effective anti-PKK alliance with the Iranian and Iraqi governments.

Local news outlets stated that Turkey hit the Asos region twice on November 4 and 12 together with many other PKK bases in Qandil, Sinath-Haftanin, Gara, Metina, Avasin-Basyan, Zap and Khakurk. The Asos area was targeted once again in late November, and according to PKK sources, “Iranian scout planes were flying over the area shortly before the bombing of the Turkish jets.” Such news on Iranian scout planes, Iranian artillery shelling and Turkish airstrikes continued in early December, which reflects the fact that Turkey and Iran are committed to root out the PKK from its safe havens comprising the areas from Qandil to Asos. While the shock of the Asos bombardment was still fresh, another wave of airstrikes targeted the Mahkmur area. While the refugee camp in Mahkmur was supposedly a UN-supervised camp, it is currently being ruled by the PKK under the banner “Martyr Rustem Refugee Camp.” While the PKK initially portrayed the attack as if the Turkish state was targeting civilians in the refugee camp, the terrorist organization later announced the names of five PKK members (under the banner of Mahkmur Self-Defense Forces) who died in the strike.

The recent Asos and Mahkmur attacks illustrate that Turkey is forming an anti-PKK alliance with the Iranian and Iraqi governments, while its long lasting western allies are turning their backs to Turkey’s fight against the terrorist organization. Thanks to this new formation, Turkey is now able to target the PKK in areas that provided a safe-zone for the terrorist group. As Turkey is waiting for the right time to face the PKK in Syria (and will probably wait until it finalizes a deal with Russia on Afrin, and until the US retracts support from the group in the east of the Euphrates River), Ankara is determined that now is the best time for such an encounter in Iraq.