Turkey's Options for a Safe Zone in Syria

In the long run, in case of a full U.S. withdrawal, it is not sustainable for the YPG to maintain their military presence among the majority of the Arab population. 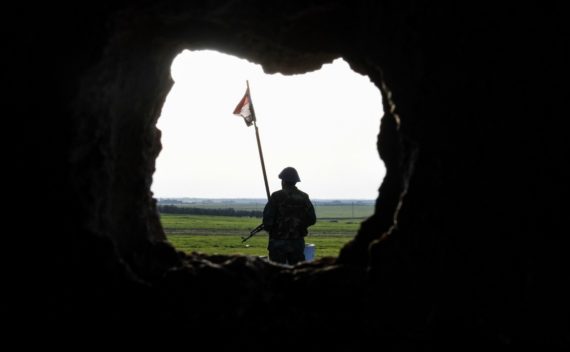 A Syrian soldier stands near a Syrian flag flying at a government forces' position in the village of Jubb Makhzoum, northwest of the northern town of Manbij, near the frontline with forces from the Turkey-backed Euphrates Shield alliance, on January 12, 2019. Getty Images

Since the U.S. decided to withdraw troops from Syria, Ankara and Washington have not yet reached an agreement regarding the question of how eastern Syria will be recognized in line with the new security architecture and political adjustment. Following the three phone calls between President Erdogan and Trump, it seems clear that both sides need some time to make considerable progress vis-à-vis the post-American era of the conflict in Syria. At this stage, we only have an ambiguous personal offer suggested by Trump, which foresees a 20-mile safe zone alongside Turkey’s border with Syria in order to meet Turkish security concerns. The signal interestingly came after Trump’s self-style tweet about Turkey, in which he directly threatened Turkey in case Ankara took military action against the U.S.-backed YPG. However, both sides have a different understanding when it comes to the definition of a safe zone, how it will be established and who will be responsible for setting it up.

President Erdogan underlined that Turkey was happy about the idea of a safe zone in his last conversation with Trump, but that Trump did not give any details about its establishment process. However, the details of the safe zone were discussed in a meeting between Chief of General Staff Yasar Guler and his American counterpart General Joseph Dunford in Brussels. Nevertheless, the agreement regarding the roadmap of the safe zone still remains unclear.

Details of the safe zone to be established in Northern Syria were discussed in a meeting between Turkey’s Chief of General Staff Yasar Guler and his American counterpart General Joseph Dunford in Brussels. Yet the roadmap of the safe zone is still unclear.

Even though there is no comprehensive roadmap regarding the establishment of a safe zone yet, Ankara has a very clear understanding that it will establish a safe zone itself in order to eliminate the YPG threat alongside its Syrian border and ensure its border security. The Turkish safe zone plan consists of three stages:

During the first stage, Ankara will continue to negotiate with the U.S. about the withdrawal in order to make sure that U.S. troops certainly leave north Syria and that the safe zone is unilaterally established by Turkey. It is clear that the Turkish administration is not open to any idea such as an international force taking charge of creating such a zone near its border. The Trump administration is signaling that some Arab groups within the SDF would be responsible for creating such a safe zone. However, Turkey will not be happy with this intention. As part of this first step, Turkey also expects the U.S. to hand over its military bases and to facilitate them within the safe zone.

At the same time, Turkey is likely to continue its diplomatic and military dialogue with Russia. President Erdogan and Putin will meet not to only talk about the future of northeast Syria, but also about the future of Idlib, where some considerable new developments occurred last week, which helped the HTS to regain control of the area. Ankara believes that Russia should also be part of a roadmap, which is something that the U.S. would probably agree upon.

Even though there is no comprehensive roadmap regarding the establishment of a safe zone yet, Ankara has a very clear understanding that it will establish a safe zone itself in order to eliminate the YPG threat alongside its Syrian border and ensure its border security.

In the second stage, Turkey will deploy its military forces in order to clear all areas within the safe zone. Ankara plans to create a safe zone from Jarablus to al-Malikiyah and cover all places where the YPG operates along the Turkish border. The potential disagreement in this stage is the uncertainty regarding the YPG elements; whether they will leave from the places where they have military and political hegemony, such as Ayn el-Arab (also known as Kobane), Tal Abyad, Ras al-Ayn, Darabasiyah, and other YPG-held territories.

It is clear that a full Turkish military control over the entire YPG-held areas will ruin what the PYD and YPG have accomplished so far. It also means that the YPG project to create a territorial hegemony in northeastern Syria will be eliminated. If Turkey and the U.S. can agree over the safe zone, YPG forces will most probably have to leave the eastern part of the region in order to find another safe haven for themselves. In the long run, in case of a full U.S. withdrawal, it is not sustainable for the YPG to maintain their military presence among the majority of the Arab population.

In the third step, Turkey will start to secure the entire region under the umbrella of the safe zone. Turkey has a great experience from post-OES stabilization efforts and can implement is experiences in the safe zone areas. The priority of Turkey is to maintain comprehensive policies and provide the necessary conditions in order to prevent the resurgence of Daesh in safe zone areas. Secondly, Turkey will provide a safe roadmap for the refugees who were displaced by the PYD and YPG from their homes in the post-Daesh period in northeastern Syria. There are many violations carried out by the PYD against non-Kurdish indigenous people of the region. It is estimated that at least more than one million refugees came from PYG-led areas to Turkey. With the establishment of the safe zone, Turkey will begin to facilitate the safe return of these refugees.

It seems that Turkey has some options to eliminate the security concerns emanating from the YPG-PKK in the region. This time, with the changing dynamics of U.S. foreign policy on Syria, Turkey found an opportunity not only to ensure its national security but also to secure the territorial integrity of Syria.