Turkey's Purchase of S-400 Missiles: A Case of Diplomatic Grief

After S-400 case, we saw the new Turkey. One which the West and perhaps even the whole world will now have to accept. This is quite painful for the West. 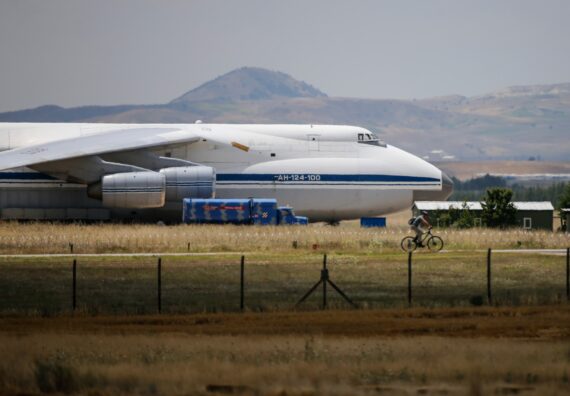 Deliveries of the Russian air defense systems S-400 to Turkey, which began on July 12, 2019, claim to be a historic event that marks the beginning of a new stage in the development of the Republic of Turkey. But not many people immediately realized the significance of this Turkish-Russian arms contract in modern Turkish history.

Full awareness of the significance of the deal began to occur in the last few days. In both Russia and Turkey, the public witnessed televised images of Ruslan aircrafts—the largest Russian transport aircrafts— ­­­landing at Mürted air base near Ankara.

The importance of the purchase of S-400 system by Turkey goes far beyond that of a single purchase of military equipment. It can result in large scale deals in the defense industry with impacts across all its segments: space, rocket production, aviation industry, shipbuilding, machine building, small arms, and so on. Moreover, we can talk not only about the purchase of these weapons by one party from another, but about a full-fledged partnership in the development, production and marketing of the manufactured equipment.

Moreover, such a long-term strategic deal may create further channels of dialogue between Turkey and Russia which have not previously existed or extensively used until now. By the S-400 deal, we may speak about the dialogue between the military structures and defense companies of the two countries. The significance of these new channels for Turkish-Russian relations is difficult to overestimate.

But, in all our discussions these days in Russia, questioning where relations between Russia and Turkey can move towards, there was always a question— if the S-400 deal will be brought to its logical conclusion.

The importance of the purchase of S-400 system by Turkey goes far beyond that of a single purchase of military equipment.

Let’s be honest: until July 12, 2019 a significant share of Russian observers and experts were skeptical and expressed serious doubts that something would not happen at the last moment to prevent the deal. This “something” however, did not happen, which broke all the patterns at the end of 2017. So, for the Russian experts footage on Turkish TV screens of the Russian Ruslan aircrafts landing at Mürted Airbase became both a refutation of their fears and a pleasant surprise, showing Turkey’s determination to cooperate with Russia in the defense industry.

Russian President Putin has a habit, regardless of relations with certain foreign countries or leaders, to call everyone “our partners”. As a result, his usage of “Western partners” or “American partners” in recent years when relations between Russia and the West have been particularly difficult, have acquired a completely definite meaning for everyone. When the Russian president is broadcasting, listeners understand what kind of partnership he is talking about.

So, for Russian observers, the practical implementation of the Russian-Turkish agreement on S-400 became a pleasant surprise. But, in the terms of President Putin, the “Western partners of Turkey” responded in a manner akin to the stages of grief recognized in modern psychology: denial, anger, bargaining, depression; and now the “Western partners” are about to move on to the fifth and final stage— the stage of acceptance. One does not even have to be a very attentive observer to identify the drift through all these five stages in the West, first of all, in the leaderships of both the USA and NATO.

In the first stage of “denial”, which lasts for a long time, the “Western partners” did not want to believe that the purchase of S-400 by Turkey might have taken place. In the foreign press and media, it was often possible to read and hear about “Turkish blackmail” as a strategy aiming to get something from the West. In the West, they got used to thinking that trade and bargaining is a kind of national sport for Turkish diplomacy. Accordingly, in the eyes of the West, Russia appeared to be a kind of “scarecrow”, which is used by Turks to scare Western politicians so that they “behave better towards Turkey”.

In the second stage of “anger”, Turkey started to hear reminders about the importance of bloc solidarity under NATO, which, after some time, turned to threats to apply measures and even sanctions against Turkey. In particular, through the framework of the Countering America’s Adversaries through Sanctions Act (CAATSA) adopted in 2017.

It is not known who was more surprised with the word “sanctions”: the Turks, who were loyal allies of the North Atlantic Alliance for many years, or the Russians, who were watching what was happening like some kind of a fantastic movie. Moreover, the United States quickly stepped out of bounds when it declared the exclusion of Turkey from the joint development and production of F-35 fifth-generation fighter aircrafts, given that Turkey is a full-fledged participant in this project and fulfilling its obligations.

At the beginning of this year, we began to observe the third stage— “bargaining”. After many years of negotiations with the Turkish side, the Americans, finally proposed Turkey purchase their own “The Patriot” systems instead. However, “The Patriot” is outclassed by the S-400 System. When comparing the range of destruction of aerodynamic targets and ballistic missiles, target height, radar coverage range, deployment time, target speed, the reaction time of the complex, rocket launch angle and other measurements, the S-400 case is superior, and much more less expensive than the American system. It would be right to say that S-400 is a step forward and newer generation system than “The Patriot”. The S-400 was first introduced in the Russian army in year 2007, while “The Partiot” has been used by American military forces since 1982. At the same time, despite this proposal, technology transfer to Turkey by the Americans was not envisaged, and a positive decision of the American Congress was not guaranteed in advance.

The short-sightedness of the US in the past led to their loss of arms markets of India and Egypt to Russia. One which the Americans have been trying to get back for many years.

Ankara quite quickly figured out the issue for itself and the whole world during the G-20 Summit in Osaka. Where it observed the fourth stage –“depression” of the United States. Just remember how the American President Trump said to President Erdogan that he “understands Turkey” and that the Obama Administration, while being in power, “behaved badly” when it refused to sell “The Patriot” to Turkey. What the whole world saw cannot be called by other word then “depression”. Because America had nothing to offer to Turkey today to persuade it or force it to abandon the S-400 deal.

And depression is followed by the final fifth stage, “acceptance”. Throughout this time, America tried to talk to Turkey not as a regional leader but as a third world country. As a result, the Americans had to change the tone of their communication with Turkey and even delay the imposition of sanctions. However, it is not clear for how long this will last. Maybe the Americans remembered how their short-sighted moves in the past led to their loss of arms markets of India and Egypt, and how Russia took the place of the United States in these countries. One which the Americans have been trying to get back for many years.

Today, a very similar situation occurs for the United States with Turkey. Turkey has shown itself to be a truly independent state, making a decision and bringing it to its logical conclusion. This is despite the unprecedented pressure that was exerted on Turkey to force it to abandon the S-400 deal, and speaking more broadly, to abandon Turkey’s possible cooperation with Russia in the defense industry.

After S-400 case, we saw the new Turkey. One which the West and perhaps even the whole world will now have to accept. This is quite painful for the West. But if, for example, the United States exclude Turkey from the F-35 program, doubtless, Russia will be happy to begin negotiations on the sale of its fighters Su-35 or even Su-57 instead of the F-35.

By coincidence, it was on these days that Turkey celebrated the third anniversary of the failed coup attempt, organized by Fetullah Gulen and its criminal cult with their headquarters in the United States. Today’s Turkey has enough power to make its own decisions and defend them regardless of external pressure. And, it seems, that the S-400 deal became “two in one”: a solution for Turkey, which is strengthening its defense capacity, and an important test for true independence in the international arena. Nowadays, we are witnessing how the fifth stage begins —the stage of acceptance of such a Turkey by the West and by the whole world.