Political circles in Turkey are once again discussing reengaging with Turkic nations but from a different perspective. It might be described as an Asian policy of Turkey, which is undoubtedly strategically important and should not be wasted as had happened in the previous era. 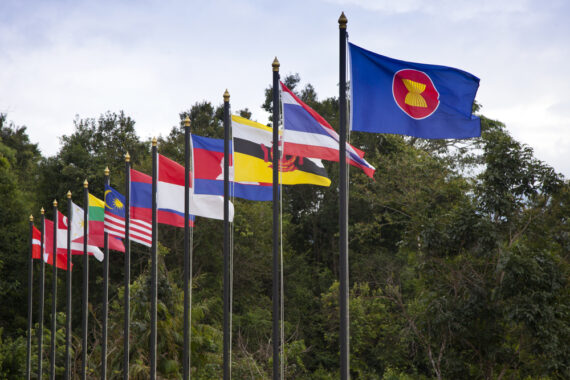 At the end of the Cold War era in the 1990s, political scientists observing some emerging economies in the Asia Pacific predicted that Asia would lead the global economy in the near future. Now it can be safely asserted that this prediction reflects some considerable truth.

In particular, the consecutive economic growth of the People’s Republic of China (PRC) and the Association of Southeast Asian Nations (ASEAN) throughout the past few decades are enough to prove this prediction, although trade wars between the US and the PRC have led to heated global discussions recently.

What makes the current process more challenging for Western economic blocs is that there are some recent regional power houses which have been molded through the initiation of unpredictable alliances, such as Shanghai Cooperation Organization (SCO) or originally known as Shanghai Five, consisting of China, Russia, Kyrgyzstan, Tajikistan and Kazakhstan.

As well as the Trans-Pacific Partnership Agreement (TPP) with 12 member countries in the Asia-Pacific region, considered to be the biggest free trade organization with its total trade volume covering 40 per cent of global trade, before the U.S withdrew from the agreement under President Trump.

As a result, member countries of the Asia-Pacific region are attempting to find opportunities which exclude the US, such as in the Regional Comprehensive Economic Partnership (RCEP), a China-led multi-national trade body established in 2012.

Will history be repeated?

Within such a global economic and political context, Turkey, as seen in the recent statement of the Minister of Foreign Affairs, is trying to reposition its geo-economic strategy by building alliances with some countries in new regions.

To be able to understand current realities in a comparable sense, one should recall what happened some decades ago. When Turkic states in Central Asia gained their independence in in the 1990s, it was at this point that a great opportunity opened up in front of Turkey to reposition itself towards other Turkic nations.

However, though there were some attempts to gain momentum for a potential alliance among the Turkic nations, Turkey was unable to provide effective leadership and the initiatives were unsuccessful.

Political circles in Turkey are once again discussing reengaging with Turkic nations but from a different perspective. It might be described as an Asian policy of Turkey, which is undoubtedly strategically important and should not be wasted as had happened in the previous era.

To make sure that history will not be repeated, it is important for there to be well-informed individuals and institutions from both domestic and international circles who adopt careful analytical approaches to comprehend developments happening in Central, East and Southeast Asia.

One should assert that Turkey’s Asia policy has a historical background which was shaped and even enforced, to some extent, by various eastern Muslim states in previous centuries. In this light, the emerging problem here is how the current attempt to reorient Turkey’s geo-economy should be rationally restructured.

Though there seems to be a strong intention to expand Turkey’s geo-economic boundaries to new horizons, it is also important to keep in mind how the member countries of the above-mentioned regional blocs such as, ASEAN and SCO perceive Turkey and in which areas they may collaborate with it.

In this regard, while the world has been evolving into multipolar power houses, the importance of ASEAN and SCO is being felt even more, and they will have a greater global influence in the rest of the 21st century. Looking at the member countries of these organizations and their primary aims there are some differences between these two associations.

SCO, which seems to give priority to regional security, is a relatively new organization established after the Cold War and the acceptance of China to the World Trade Organization in 2001. This organization can now be regarded as an alternative to other established regional organizations such as ASEAN and APEC which are led by the US and its allies.

Moreover, after the diminishing role of the Russian led communist bloc, economically liberalized China expanded its economic and investment environment into Central and Western Asia, which are considered to be a buffer zone with Russia. In addition, one can assert that China aims to come to a certain political and economic understanding with Russia, and does not want to have fierce rivalry with it in Central Asia.

On the other hand, ASEAN was a product of Cold War politics, which aimed to protect Southeast Asia from the direct influence of the Communist China.

Turkey has been restructuring its foreign policy from the initial years of this century based on its strong interest in becoming a global actor.

Its emerging position in the world is a result of various factors, such as its economic development, strong investment in higher education, expansion and diversification of Turkish representative agencies in relevant regions around the world, and so on.

Although Turkey’s soft power, emerging in forms such as humanitarian aid and scholarship programs for international students among other initiatives, have been particularly successful, Turkey’s real economic and political impacts are yet to be realized.

In this context, the duality of giving priority to soft power or hard power should be overcome and both need to be addressed in a balanced way to support each other in the implementation of programs in the region.

In particular, East and Southeast Asia have some other characteristics such as having a significant work force, a higher percentage of young people in the population, growing urbanization, and technologically innovative production systems, which are the triggers for economic modernization of the region.

Malaysia, Singapore and Indonesia, ASEAN members, are crucial for Turkish companies as they are adjacent to the Malacca Straits bridging India and China, two huge consumer markets.

The issues considered to be advantages of Turkey are its leadership capacity, historical-cultural ties, positive perception of Turkey by regional peoples, liberal values intermingled with deep historical and religious roots, experiences in liberal economic practices and so on. Turkey’s ideologically neutral stand as compared with China, Russia and the US will also increase its alignment with regional Asian countries.

On the other hand, being less informed about the historical background, colonial impact, diverse religio-cultural realities of the region, and the scale of competitiveness are the challenges which Turkey will need to overcome.

From smaller steps to greater associations

As it has been observed in the past decade and a half, even the bilateral relationships between Turkey and relevant countries in East and Southeast Asia are yet to give fruitful results or advance, at least in some sectors, towards higher levels.

To be able to have well-structured relationships with ASEAN and SCO, Turkey should represent itself in the region with a dedicated group of individuals in the field. Otherwise, establishing relationships with these Asian countries would be difficult.

Since all the major multinational companies are competing fiercely in the region, major Turkish companies should compete with their counterparts in selected regions whose populations have some closer connection Turkey.

Among the ASEAN member countries, Malaysia, Singapore and Indonesia are quite crucial for the easy engagement of Turkish companies. Since these countries are adjacent to the Malacca Straits bridging India and China, which are two huge consumer markets. Turkish companies can find time to adjust before considering expansion to the larger parts of the region.

For a successful engagement of Turkey and Turkish companies, a much broader mapping of investments in technologies, collaboration in larger regional and global markets and cultural investments are highly critical.

Regarding the latter, small and mid-sized enterprises (SMEs) should focus initiatives on strategic areas, since the nature of economic development in East and Southeast Asia has been based on the sustainable productivity of SMEs.

It is hoped that this strategic step will bear fruit not only for the gradual expansion of Turkish companies, but will help significantly in the economic and social welfare of local communities as well.