Turkey's S-400 Deal: The Last Straw that Breaks the Camel's Back in US-Turkey Relations?

Turkey's purchase of S-400s from Russia is more than a simple choice. It's a strategic choice that might re-shape Turkey's overall position in international politics. 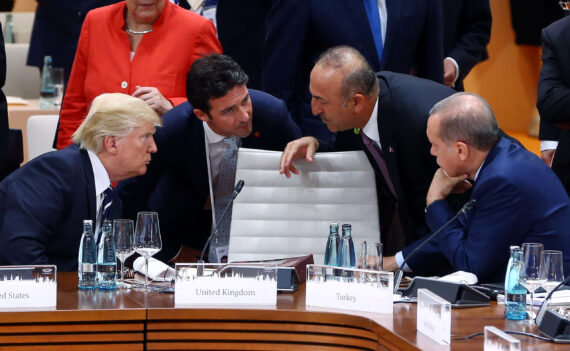 President of Turkey Recep Tayyip Erdogan talks with US President Donald Trump, accompanied by Foreign Affairs Minister of Turkey Mevlut Cavusoglu, during a session within the G20 Leaders' Summit in Hamburg, Germany on July 07, 2017. Anadolu Agency

Once again, Turkey-U.S. relations are signaling of going through another turmoil. This time it is about Turkey’s purchase of S-400 air defense systems from Russia. Charlie Summers, head of the American forces in Europe and NATO’s top military officer stated, “If Turkey takes the S-400, there would be grave consequences in terms of our military relationship, and the Patriots and the F-35s.” It is yet to be known how binding or how backed this statement is given the complexities and ambiguities in the American state apparatus in recent years. Nevertheless, it is serious in its tone. The statement is not the first of its kind but is unprecedentedly tough. The statement also brings in some retaliatory measures, such as pulling out of the Patriot missiles purchase and denying the transfer of F-35 fighter jets to Turkey.

Despite this pressure from the U.S. side, Turkey seems solid in its deal over purchasing S-400s. During a TV interview last week, President Erdogan said that it was a “done deal,” “as we conclude the S-400 issue, signed a deal with the Russians, and will start co-production.” He even stated that after this deal is finalized, Turkey and Russia may work on a possible S-500 deal. Erdogan is well-known for his firm stance against pressure, whether coming from domestic or international parties. This is more than a simple choice though. This is a strategic choice that might re-shape Turkey’s overall position in international politics. Turkey is known as a loyal ally to the U.S. since the Cold War, but it seems like some factors have pushed Turkey to question this role.

Turkey’s purchase of S-400s from Russia is more than a simple choice. It’s a strategic choice that might re-shape Turkey’s overall position in international politics.

In fact, it is quite a simple equation. Turkey has very concrete and longstanding worries with regard to its national security. Two of them are paramount. Two organizations, the PKK and FETO, have caused many casualties for the country. Yet both organizations have found safe havens under U.S. support. The U.S. hosts FETO leader Fetullah Gulen, a Turkish citizen, and has not complied with Turkey’s extradition request. Many other FETO members and FETO institutions still remain active in the U.S. Last week, First Lady Melanie Trump even visited one of the organization’s schools in Oklahoma.

The U.S. support for the PKK is even more threatening. This is because they are operating right across Turkey’s Syrian border. The U.S. is providing weapons, training, and active surveillance for the PKK’s Syrian branch, the PYD. This is the organization that sends suicide bombers into Turkey from Syria. Amongst the 11 such attacks documented prior to Turkey’s operation against the PYD in Syria, one was quite significant. In December 2016, the PYD conducted a terrorist attack in Besiktas, Istanbul, and caused 46 deaths, including 39 police officers and 7 civilians. The attack occurred right after a football game and the suicide bomber blew herself when she was noticed by the policeman surveilling for the game. The militant who carried out the suicide bomb received training and instructions in the PYD-ruled Kobani (Ayn-al Arab) and crossed the Turkish border illegally.

As the U.S. keeps pushing Turkey away, Turkey will now have to seek for alternative partnerships and alliances.

This is one of many examples where the PYD directly targeted Turkey, which later caused the Turkish government to conduct an operation against the PYD in Afrin. The only power that keeps this organization alive today in Syria is the U.S. It would be ridiculous to expect a blind loyalty from Turkey while the U.S. backs this group, which poses a serious threat to its national security. Naturally, Turkey is seeking security partnerships with other regional and global actors – the ones that do not support terrorist organizations that target Turkey.

This is the recent story of Turkey’s shift away from the U.S. As the U.S. keeps pushing Turkey away, Turkey will now have to seek for alternative partnerships and alliances. The bad news for relations between Turkey and the U.S. is that Turkey has never felt more threatened from any other power than it feels today about the U.S. support for terrorist organizations attacking Turkey. The S-400 deal might create grave consequences, but Turkey seems to be okay with this as it feels that it has no other choice. If the U.S. genuinely wants to re-build relations with Turkey, it is as simple as stopping the support provided for the PKK and FETO.