Turkey's Snap Elections: Why During the State of Emergency?

In the Ottoman Code of Civil Law, there is a nice rule: “Bad examples do not serve as models.” I recalled the French case in view of this rule. In proportion to the terror attacks in France, the 719-day long emergency state and the normalization of the emergency rule through new laws set a bad example to the world. 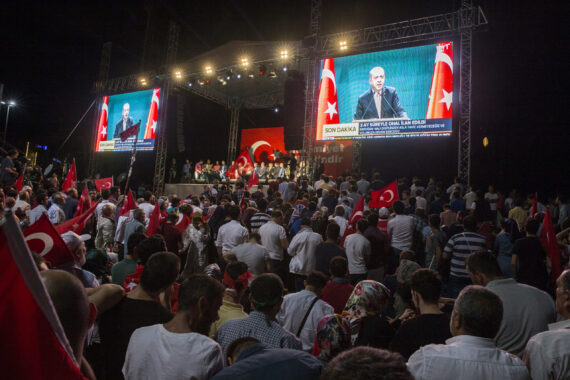 People watch and listen to Turkish President Recep Tayyip Erdogan on TV as Erdogan delivers a speech during a press conference after the National Security Council and Cabinet meetings, at Taksim Square in Istanbul, Turkey on July 21, 2016. Anadolu Agency

The upcoming presidential and parliamentary elections in Turkey will be held on June 24 – during the state of emergency. The U.S., UN, and the Council of Europe issued criticisms and warnings to Turkey with regard to this situation. Heather Nauert, the U.S. Department of State Spokesperson, stated upon a question: “During a state of emergency, it would be difficult to hold a completely free, fair and transparent election in a manner that’s consistent with … Turkish law and also Turkey’s international obligations … We have concerns about their ability to hold it during this type of state of emergency.” Following this, the UN also warned Turkey that the elections during a state of emergency will not be reliable. The UN High Commissioner for Human Rights called upon the Turkish government to lift the state of emergency to enable the credibility of the early elections. Meanwhile, the Committee of Ministers of the Council of Europe and the European Parliament Spokesperson referred to Article 15 of the European Convention on Human Rights and pointed out that a state of emergency cannot be implemented based on assumptions or possibilities, but that the danger is required to be present or tangible.

Then, the emergency rule became the “new normal.” With the new security law signed by President Emmanuel Macron, which entered into force on October 30, 2017 and will expire in 2020, four rules that were in effect during the state of emergency passed into law. The new law restrains the ones linked to terror groups from going outside of their residential areas and introduces judicial control to them on a daily basis. Such individuals are also banned from entering certain areas. Besides, as in the emergency rule, the investigating authorities are entitled to search houses according to the new security law.

Some 25 mosques were closed during the state of emergency, and the law also authorizes the relevant bodies to shut down places of worship where extremist ideas are propagated. The law also allows identity checks in border areas or within a 10 km radius of airports and international stations. French Interior Minister Gerard Collomb said during a speech he made at the national parliament, “We are still in a state of war,” adding that the threat level was still “very serious.” Collomb also remarked that around 20.000 people were blacklisted and the officials who are thought to have been radicalized would be discharged.

So, why did Turkey declare a state of emergency? Daesh attacks in the country started back in 2014. Between 2015 and July, 2016, a total of 1864 people, including civilians, police and military officers, were killed in the attacks of Daesh and the PKK terror group. Despite all, Turkey did not declare an emergency rule. On the night of July 15, 2016, however, the Gulenist Terror Group (FETO) and its operatives who infiltrated the state apparatuses of the country attempted to stage a military coup. They held the Chief of General Staff hostage, opened fire on the National Intelligence Unit headquarters, attacked Special Forces, and shelled the Parliament. People took to the streets all across the country to resist, remained on vigil in front of military posts and stood before tanks. 248 people were killed while 2.200 were wounded. Most of the wounded suffered loss of limb. Meanwhile, the PKK’s Syrian offshoot operated as the land force of the U.S., who is an ally of Turkey.

In the Ottoman Code of Civil Law (Mecelle), which was finalized in 1876, there is a rule: “Bad examples do not serve as models.” I recalled the French case in view of this rule. In proportion to the terror attacks in France, the 719-day long emergency state and the normalization of the emergency rule through new laws set a bad example to the world. On the other hand, what Turkey has gone through over the past years, including the threats posed by Daesh, PKK, FETO and various external factors, is incomparable to the incidents in France. In Turkey, the state of emergency was declared on July 16, 2016 on the grounds of Article 120 of the Turkish Constitution. And on April 19, the Turkish Parliament voted to extend it for the sixth time by July 22, 2018.