After the events during which police officers and the military clashed, the necessary and efficient precautions to have healthy investigations on thousands of suspected military and police officers, civil servants and civilians, to reestablish public order and to reinvigorate the economic life were implemented with the state of emergency. 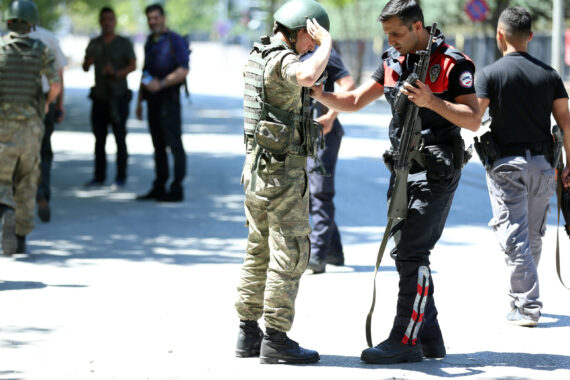 A putschist soldier is detained by the police as the coup attempted was thwarted on the 16 July, 2016. Anadolu Agency

Two years ago, on July 15, Turkey experienced a vicious coup attempt in its rather substantial history of coups. This coup attempt was more similar to the May 27, 1960 coup when compared to September 12, 1980, as the latter was realized within the chain of command. The July 15 coup attempt was perpetrated by a seemingly religious group, a criminal cult with civilian affiliates that had infiltrated not only the Turkish Armed Forces (TAF) but all state institutions makes it unique. During that night, unarmed public and the Parliament were attacked for the first time in Turkish history of coups. This coup, however, was thwarted with the courage of the Turkish people and the determination of the political will. Nevertheless, a challenging process of cleansing state institutions from FETO members and mending the wounds left by the coup attempt had followed.

Re-establishing the public order and incapacitating the putschists were prioritized; without delay, the government began to remove FETO members from state institutions. Following the TAF’s cleansing, FETO-affiliated civil servants in all institutions, especially in the judiciary and the security forces, were removed according to the law, and administrative and legal processes were initiated. However, this was only the beginning. To be able to eliminate this threat efficiently, the Council of Ministers gathered under President Erdogan’s lead announced a three-month state of emergency in all cities of Turkey on July 20.

The state of emergency’s proclamation was preferred because of the extent of the threat and the counter-measures needed to be implemented against it. This coup attempt wasn’t realized only by a limited military junta organized under the TAF – it was perpetrated by a secretive and insidious organization that infiltrated public institutions. Infiltrating the TAF over numerous decades and operating in a clandestine way, the extent and capability of this organization was unclear. Investigations on and operations against this organization show that FETO is yet to be deciphered completely.

During the coup attempt, along with previous events, we have seen the existence of judges, prosecutors, security force members and high-ranking state officials, which unquestioningly obey every whim of FETO leader, Fetullah Gulen. Captured at the “command center” of the coup attempt and later identified as FETO’s TAF imam, Adil Oksuz, was released by judges despite the legal consequences. Similarly, two military prosecutors went to the Akinci Airbase on the day after the coup, destroyed the evidence there and escaped from Turkey.

Along with these, a police officer assassinating Russia’s Ambassador to Turkey, Karlov, indicated the threat FETO posed. It was clear that this organization, which could hurt Turkey’s security and peace with sabotages, assassinations or suicide bombings should be eliminated with a long-term plan. Moreover, the PKK and Daesh were increasing their pressure on the region, terrorist threats were emerging from Syria and Iraq and cross-border operations were taking place during this period. All of these made the state of emergency a necessity.

The state of emergency is a mechanism employed when a state faces an adversary or a threat that cannot be eliminated through common and conventional legal measures. The main characteristic of this mechanism is that it increases state authority which, in turn, allows the state to eliminate the threat more easily. State of emergency is implemented and maintained by constitutional institutions in accordance with the respective laws in the constitution. Therefore, it doesn’t mean undemocratic, unlawful and arbitrary usage of power. Constitutional rights, the rule of law and legal supervision of all state institutions are maintained. In addition, state of emergency is a procedure that is included in the constitutions of all democratic states with the rule of law and no state hesitates to implement it when necessary.

The state of emergency targeting  state or society?

It has been expressed that the most prominent characteristic of the state of emergency is the increasing authority on the part of the state. The extent of this authority and how it should be exercised is regulated by the State of Emergency Law No.2935. Despite the authority endowed to the state by the law, it was exercised in a way to not interfere with the everyday life of the people and to facilitate the fight against FETO. After the events during which police officers and the military clashed, the necessary and efficient precautions to have healthy investigations on thousands of suspected military and police officers, civil servants and civilians, to reestablish public order and to reinvigorate the economic life were implemented with the state of emergency.

It should be underscored that the exercise of authority during the state of emergency is supervised by the judiciary. Only the state of emergency executive orders were exempted from legal supervision of the Constitutional Court. However, as this caused apparent issues, the State of Emergency Commission was established and this commission paved the way for legal supervision.