Turkey will remain a major stakeholder in northern Syria and any political agreement for the future of Syria will have to ultimately accommodate Turkish interests. Russia and Iran need to make sure that the situation in Idlib does not result in a disaster that Turkey has to handle on its own. This would not only alienate Turkey as it creates real dangers against Turkish interests but will also delay a potential political deal for Syria. 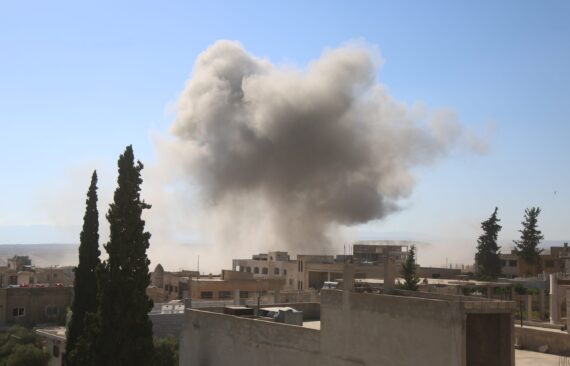 Turkey has been taking direct action in northwestern Syria in order to protect a variety of significant interests for several years now. Since March, Ankara has been working to build camps with a capacity to host 170,000 refugees inside Syria so to stem the refugee inflows in the event of a major operation by the regime against Idlib. The potential for a fresh round of mass exodus is increasing as the Assad regime appears to plan to capture the last remaining bastion of opposition by justifying it on the presence of al-Qaeda linked groups in the area. The Assad regime’s past practice has shown that it will not spare civilians in the event of a military operation and that it will almost certainly create hundreds of thousands of IDPs. Having warned the regime against a possible operation, Turkey has been lobbying Russia and Iran for a while now to prevent such a scenario.

There may be a real danger of escalation and risk of conflict with Turkish troops on the ground, which have been deployed to the region to create a de-confliction zone – not to mention millions of IDPs, if the Assad regime attacks Idlib. Turkey is now a major stakeholder in what happens in northwestern Syria, including much of Idlib. The region’s future has a bearing on the fate of the opposition supported by Turkey, the success of the de-confliction zones, and whether the Assad regime can make a long-lasting deal with the YPG, the Syrian branch of the PKK. A regime offensive in the area would produce a new era of instability, potentially disturbing the hard-earned stability thanks to Turkey’s investment on the ground and diplomatic work with Russia and Iran.

Turkey has handled the humanitarian situation admirably over the years but this does not mean it was cost-free either economically or politically. Turkey spent billions of dollars in hosting refugees and it has evolved to be a rather politically sensitive issue domestically. The Turkish administration has been advocating for the creation of stable zones in Syria so that significant numbers of refugees are given the possibility of returning to their homelands. It is not clear whether all refugees in Turkey will be able to, or are willing to, return. However, the fact that close to a quarter a million Syrians have returned is already good news for Turkey. Yet, if the regime repeats what it has done in other parts of Syria by inflicting senseless violence and damage in Idlib, Turkey will be hard-pressed to prevent millions from marching to the Turkish border and to protect its other strategic interests.

What happens in Idlib may spell the end of the Syrian Civil War at a catastrophic cost in human lives and humanitarian challenges. The regime clearly intends to declare victory by taking over Idlib even if it has to create yet another major humanitarian disaster. Russia and Iran have been the critical players on the ground with an indecisive American presence focused on Daesh. The U.S.-backed YPG is now striking a deal with the Assad regime, once again refusing to understand the realities of the region and Turkey’s determination. The Trump administration is not interested in a robust strategic presence in Syria despite arguments for it in order to contain Iran’s influence. Lacking a serious rationale for being in northern Syria other than preventing a potential comeback by Daesh, the U.S. commitment will be increasingly weakened.

Given these dynamics, Turkey will remain a major stakeholder in northern Syria and any political agreement for the future of Syria will have to ultimately accommodate Turkish interests. Russia and Iran need to make sure that the situation in Idlib does not result in a disaster that Turkey has to handle on its own. This would not only alienate Turkey as it creates real dangers against Turkish interests but will also delay a potential political deal for Syria.