Yes, the joint statement did not guarantee a fully peaceful solution over Idlib but this diplomatic traffic is still better than no diplomacy for Turkey, which is trying to eliminate the possibility of a bloodbath in Idlib. 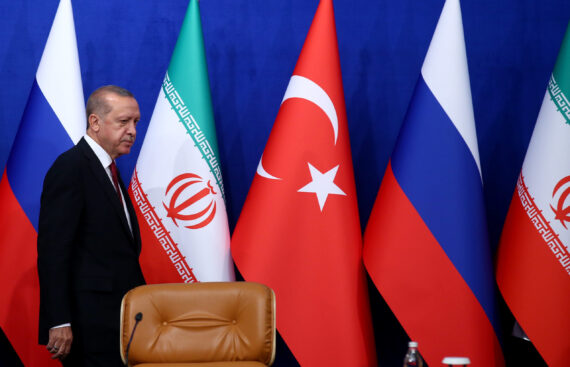 President of Turkey Recep Tayyip Erdogan arrives to take part in a joint press conference of Erdogan, Putin and Rouhani after a trilateral summit between Turkey, Iran and Russia on September 7, 2018 in Tehran, Iran. Anadolu Agency

The long-expected Tehran summit, which was aimed to bring a resolution to the heating Idlib problem on Syria took place on Friday, September 7. The tripartite summit of Turkey, Russia and the hosting country, Iran, also included bilateral talks between the leaders. As it appeared on the live speeches of Erdogan, Putin, and Rohani, the talks were hot and the positions were stiff, hence it was not an easy job for the leaders to meet around a common position. While the difficulties were obvious, the problem is heating for Idlib’s civilian population and the need for a resolution is imminent.

The joint statement of the summit included twelve points. According to the first point in the statement, the Astana process is regarded as successful for diminishing violence in Syria over the last one and half years. While this was the reason why Turkey backed the Astana process from the very beginning up until now, its effectiveness is questioned even by Turkey. The designated de-escalation zones (Idlib, parts of northern Homs, Eastern Ghouta, and parts of Deraa and Quneitra) worked for some time but the regime forces attacked them one by one with Iranian and Russian backing with one or another excuse. And now the last pocket of those, Idlib, has been sporadically targeted by air strikes for the last few days. In the summit, President Erdogan also stated his discontent with the destiny of the other three de-escalation zones and his concern about Idlib following the pattern.

The second point in the joint statement was more obviously agreeable with its emphasis on the territorial integrity of Syria. This has been Turkey’s position since day one of the Syrian crisis. All the three actors genuinely share this position and this decisiveness can be interpreted as a handicap for the possible long-term goals of the U.S. in the east of the Euphrates River in Syria.

The rest of the points in the statement reaffirmed the three countries’ determination to continue their joint efforts for coordination. Turkey has proved to be a very collaborative actor for Iran and Russia but again, an fait accompli in Idlib will also shake Turkey’s trust in this trilateral cooperation and will put the future of this cooperation in danger.

From the perspective of Turkey, the joint statement is not the best possible text, but it is also not the worst. Of course Turkey would be happier if there was a clear warning to the PYD/PKK in the joint statement, but let us not forget that the summit was primarily about Idlib and hence, the absence of PYD-PKK linkages in the text is not a deal breaker for Turkey for now. This issue will be more and more important for Turkey when the attention will shift from Idlib to the northeast territories of Syria. Moreover, neither the PYD nor the Assad regime were represented in the Astana process or in the summits like the one in Tehran on Friday.

Another great thing about the summit would be if Russia and Iran fully agreed with Turkey’s concerns about the humanitarian crisis in Idlib in case it is attacked by the regime forces. Yes, the joint statement did not guarantee a fully peaceful solution over Idlib but this diplomatic traffic is still better than no diplomacy for Turkey, which is trying to eliminate the possibility of a bloodbath in Idlib. For Turkey, this diplomatic traffic is also a way to buy time as Ankara is enlarging the camps and increasing its capacity for relief around Idlib for a possible humanitarian crisis. After all, the odds for a larger scale attack in Idlib are very high but Turkey will try its best to postpone the battle until its relief mission is ready and also to minimize the battleground to narrower circles by keeping the heaviest populated areas of Idlib out. After all, Idlib’s future cannot be left to the radical groups such as Hay’at Tahrir al-Sham but it can also not be left to the regime, which is likely to carry out mass killings. Until a final resolution is adopted on the future of Syria, Turkey will play its fair role in Idlib to keep itself safe from possible threats to be originated from Idlib and to keep the city’s civilian population safe from Assad’s rockets and dungeons.