The move to invite PYD seemed an unnecessary hitch that has the potential to trouble the warming relations between Turkey and Russia. Cavusoglu stated that the participation of the terrorist group in the Syrian National Dialogue Congress would be unacceptable for Turkey. “Our sensitivity about PYD/YPG is obvious,” he added. 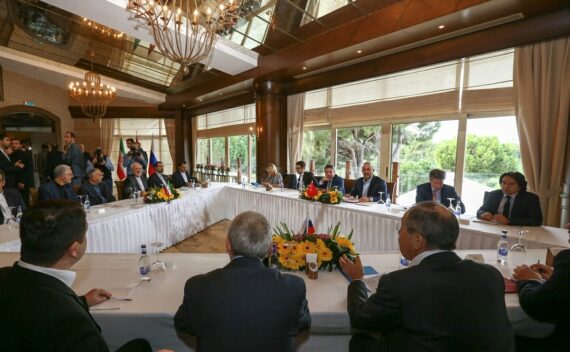 Ahead of the Syria conference to be held in Russia’s Sochi city Turkish, Russian and Iranian foreign ministers met on Sunday in Turkey’s Mediterranean city of Antalya.

According to the reports that emerged from the Turkish foreign ministry, the purpose of Sunday’s meeting of the three foreign ministers, Mevlut Cavusoglu (Turkey) Sergey Lavrov (Russia) and Javad Zarif (Iran) was to discuss a range of topics that may come up during the Sochi conference. The reports indicated that the purpose of the summit was to evaluate the steps that the three guarantor countries Turkey, Iran and Russia took in the past with regard to Syria and steps that needed to be taken in the future.

The meeting is significant amid the reports that Russia was also going to invite PYD to participate in the conference – which is intolerable for Turkey. The move to invite PYD seemed an unnecessary hitch that has the potential to trouble the warming relations between Turkey and Russia. Cavusoglu stated that the participation of the terrorist group in the Syrian National Dialogue Congress would be unacceptable for Turkey. “Our sensitivity about PYD/YPG is obvious,” he added.

While describing aims and benefits of ongoing cooperation among Turkey, Iran and Russia, Turkish Foreign Minister Mevlut Cavusoglu said, “With the Astana process, we have come a long way with Russia, especially in terms of the establishment of peace on the field and forming de-escalation zones. The situation on the field is much better compared to last year,” Cavusoglu said.

Ever since the cease-fire was brokered in December 2016 by Turkey, Iran and Russia, which led to the talks in Astana, Kazakhstan, the three contending nations have seen their objectives converge in Syria. The talks are being held in parallel to UN-backed discussions in Geneva to find a political solution to the six-year conflict.

Children with no human rights

Meanwhile, ahead of the Universal Children’s Day to be marked on November 20, an international rights organization has noted that millions of children in war-weary Syria continue to be deprived of their most basic rights, which include education, health, and protection against violence.

International Refugee Rights Organization deputy chairman Abdullah Resul Demir said, “Children are the ones mostly affected by this war. Because they are perhaps the most needy and vulnerable beings on the earth.”

Referring to UNICEF’s report of September 2017 Demir said a total of 8.5 million children – 6 million in Syria, 2.5 million out of the country – were affected by the conflict. The ratio of 8 to 10 Syrian children are “children of war” and 1.7 million live in the most intense areas of the conflict, while 2 million cannot go to school.