When the hostess interrupted Yildirim saying; “But in the UK we don’t pass decrees in parliament here that conflict with basic human rights.” Yıldırım responded “Did you ever face a coup attempt where the Buckingham Palace was attacked by [your own] planes? Did you face this kind of thing? If you ever do, then we will see what you are going to do. 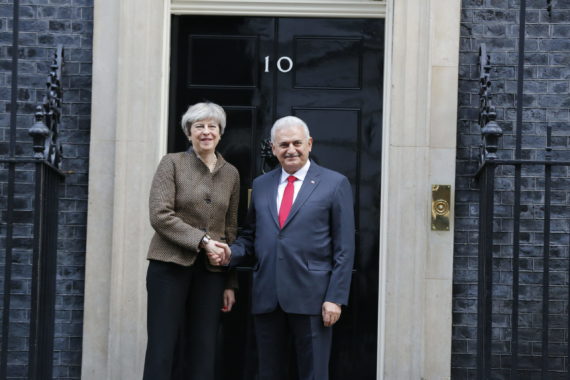 British Prime Minister Theresa May (L) and Prime Minister of Turkey Binali Yildirim (R) in front of 10 Downing Street, the official resident of the UK Prime Minister, prior to their meeting in London, England, United Kingdom on November 27, 2017. Anadolu Agency

Turkish Prime Minister Binali Yıldırım and his British counterpart Theresa May met at her office on Downing Street on Monday.

Following Yıldırım’s Monday morning meeting with a group of British businesspeople, which focused on new investment opportunities, May hosted a Turkish delegation led by Yıldırım for talks before a one-to-one meeting with the Turkish prime minister.

“We will deal with our bilateral relations and regional issues, including Iraq and Syria, in particular the struggle against terrorism, and this visit will be an opportunity to strengthen relations,” Yıldırım said.

Speaking at the press conference, Yıldırım stated that May’s visit to Turkey at the beginning of the year paved the way for new cooperation and investment opportunities, especially in the defense industry.

May added “Our relationship with Turkey is very important for us, we are partnering on various global issues, we are fighting terrorism, we have a trade volume reaching 15 billion sterling, and I am happy to see the developments in our relations since our visit to Turkey.”

After the Yıldırım-May meeting, the delegations met.

Besides his meeting with May, Yıldırım was also interviewed by BBC World.

The Turkish prime minister has confirmed that US President Donald Trump recently told his Turkish counterpart Recep Tayyip Erdogan in clear terms that it was “wrong” to supply weapons to the PKK/YPG.

“They [the US] said this [cooperation with YPG or PYD] is not a choice. This is a necessity. Ok. We understand, although we do not accept. It is a temporary relation. Now, it is time to finish because Daesh is defeated,” Yıldırım said.

“So, President Trump said it is wrong to provide weapons. This is clearly mentioned.”

Stating that Turkish policy on fighting against Daesh had been quite “clear” since the beginning, Yildirim said it was important to “choose the right partner” to fight Daesh.

Pentagon spokesman Eric Pahon later told Anadolu Agency “We have always been clear with Turkey that the weapons provided to the SDF, to include its Kurdish elements, would be limited, mission-specific and provided incrementally to achieve military objectives.”

He said the US would “continue our partnership with the Syrian Democratic Forces to complete the military defeat of Daesh”.

At the White House, spokeswoman Sarah Huckabee Sanders said even though a complete defeat of Daesh is in sight, “that doesn’t mean stopping all support of those individual groups”

On a question whether Turkey had submitted evidence to Washington showing Fetullah Gulen, the US-based criminal cult leader of the Fetullah Terrorist Organization (FETO), had links to last year’s defeated coup attempt, Yildirim said the necessary documents had been submitted.

“They need to take some steps because we have shared the evidence and documents necessary for extradition, for us, it is obvious. We have no hesitation. We have no doubt about it.” He added, referring to FETO’s role in masterminding the coup attempt of July 15, 2016.

Yildirim also answered a question on accusations about the detentions since the defeated coup attempt.

“This kind of accusation is there. I accept. But those who are accusing us should think about what happened on July 15. Our parliament building [was] bombed. And their bullets and bombs killed 250 innocent people and [left] 2,194 heavily injured. What can we do then? We have to find [those] who committed the crime. This is the situation in Turkey.”

When the hostess interrupted Yildirim saying; “But in the UK we don’t pass decrees in parliament here that conflict with basic human rights.” Yıldırım responded “Did you ever face a coup attempt where the Buckingham Palace was attacked by [your own] planes? Did you face this kind of thing? If you ever do, then we will see what you are going to do.”

Before his meeting with British Prime Minister May, Yildirim attended the opening ceremony of a new investment bank by Dome Bank, a joint venture by various partners, including Turkey’s Dogus and FIBA holdings on Sunday evening.

The first-ever investment bank founded with Turkish capital in the British capital London was inaugurated by Turkish Prime Minister Yildirim.

“Primarily our economy, and Dogus Holding, FIBA Holding, and other partners, who contributed to this business with their finances, money, and time, will benefit from actions carried out via this investment bank,” Yildirim said.

Yıldırım made the following statements in his meeting with investors;

“The trade volume between the two countries surpassed $17 billion, and the total gross annual output in Turkey is around $30 trillion. The investment to Turkey is not limited to Turkey only, it means investment in many countries with ambitions to grow.

Although scenarios for 2017 was produced, the Turkish economy is in 3rd place with more than 5 percent growth. Our growth rate will be around 6-7 percent at the end of the year. The economy produces employment. I would like to remind you once again that our country is the fastest growing country among OECD and G20 countries.

Turkey has made 6 of the world’s 10 mega projects. This is the greatest result of how far Turkey has been in confidence and stability.”

Panel at the International Institute for Strategic Studies

Prime Minister Yıldırım also spoke at a panel titled “Turkey’s perspectives on the Middle East: Is there a light at the end of the tunnel?” in the London-based think tank the International Institute for Strategic Studies on Monday.

Yildirim made important statements, saying, “Turkey is a nation that can contribute to efforts toward lasting peace and stability in the Middle East.”

“If there is one country that keeps the hopes of Syrian people alive, it is Turkey,” Yildirim told a group of NGO representatives, scholars and journalists.

He pointed out that peace talks in Astana, Kazakhstan launched in January this year were not competing with similar efforts in Geneva but were aimed at supporting a peaceful transition in Syria.

“The Astana process is not an alternative to the Geneva process but a preparation for a sustainable and stable governance that would be based on the territorial integrity of Syria and in which all ethnic groups that have not had contact with terrorism [groups] would be represented,” he said.

Yildirim said the parties involved in the Astana process had come a long way in reducing tensions and achieving a ceasefire. The Astana process has been an initiative by Turkey, Russia, and Iran to look for a sustainable peace deal in Syria.

Yildirim added he was sure that “in a not very long period of time, the Syria question will meet a solution and the struggle and pain experienced in the region will come to an end”.

He stressed that more than 3.5 million Syrians have been accommodated in Turkey in total after fleeing their country due to civil war.

“Of course, it would be unthinkable for Turkey – who shares a 911-kilometer-long border with Syria – to remain non-responsive”, he said.

“We have welcomed millions of people who fled oppression and attacks.”

Turning to the subject of terrorism, Yildirim said Turkey has rejected the entry of more than 50,000 foreign fighters from 54 different countries.

He said around 3,000 Daesh members were arrested or jailed.

“We have achieved great work in the fight against Daesh within the framework of [Operation] Euphrates Shield. We have neutralized 3,600 Daesh members on Syrian soil,” Yildirim said.

Yildirim said “we always say that religion and sects could never be countries’ politics; they cannot be shaped by them,” he added after saying that Turkey and Iran have had good neighborly relations for centuries.

“We can think or believe differently. What we need to do is respect each other’s beliefs, thoughts and even interpretations. No matter what we are — Christian, Muslim, Shia or Sunni — we are all subjects created by Almighty God.”

Pointing out that Turkey is a country capable of providing a balance between the U.S., the EU, NATO countries, Russia and Iran, Yildirim said it is a country that can contribute to building lasting peace in the region.

Regarding a question on various concerns over Turkey’s purchase of the S-400 missile defense system from Russia, Yıldırım said “the answer is simple.”

“We say to the US that ‘PYD/YPG is a terrorist organization. Do not cooperate with them’, and they turn to us to say ‘This is not a choice; this is a necessity.’ I also say the S-400s are not a choice but a necessity.”

Yildirim said a day of mourning was declared in Turkey following last week’s terror attack in Egypt. He said messages of condolences were sent to Egypt from Turkey’s President Recep Tayyip Erdogan and himself. The attack on a mosque after the Friday prayer killed more than 300 people.

“There has been no problem between Egyptian and Turkish people since the beginning. The problem is the ousting of a president who was elected in a democratic way with a coup. This happened in Egypt,” he said.

Referring to the July 15 coup attempt Yildirim added that a similar coup was tried in Turkey, but “our nation did not permit it.”