The Western media have portrayed Ekrem Imamoglu as an ideal candidate for Turkish politics and have disregarded serious questions and accusations that he faces. They’ve turned a blind eye and a deaf ear to his previous failures, which Imamoglu is consistently asked about. 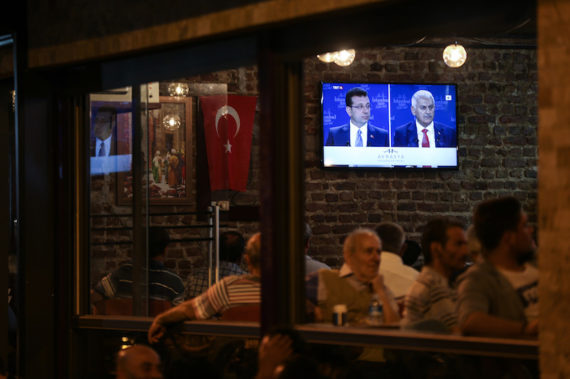 On last Sunday evening, the two candidates in the Istanbul mayoral election race, Binali Yildirim and Ekrem Imamoglu, came together for a three hours-long televised debate. As a highlight right before the re-run election today on June 23, 2019, the debate gathered millions of voters from all over Turkey to watch the potential future mayor of Istanbul. There was no actual winner of the televised debate, but Yildirim reflected more successfully on mayoral issues.

This evening will show by which dynamics and factors the voters of Istanbul were persuaded and on which grounds they elected their new mayor. Unfortunately, on the other hand, the televised debate – just like all other news on Istanbul – was not accurately discussed in the Western media. A simple look at the news and headlines of some media outlets in the U.S., UK, France and Germany reveal the journalistic bias.

The Western media have portrayed Ekrem Imamoglu as an ideal candidate for Turkish politics and have disregarded serious questions and accusations that he faces. They’ve turned a blind eye and a deaf ear to his previous failures, which Imamoglu is consistently asked about. Interestingly enough, Binali Yildirim, the experienced statesman and the joint candidate of the AK Party-MHP alliance, is not given equal attention by the Western media. Even when he is given attention, it’s usually in a negative tone. It is absurd that Yildirim’s previous achievements during both his term as the country’s Minister for Transportation and Communication (2002-2013, 2015-2016) when Turkey’s main highways and high-speed train networks were re-constructed, and his term as the Prime Minister (2015-2018), are not taken into consideration by these media outlets.

Instead of addressing Yildirim’s personality, success and failures, career path, massive infrastructural projects he took, which were not common for Turkey, nearly all Western media outlets editorialized news on Yildirim by silencing him. On the contrary, Imamoglu was presented in the media in a very positive way, disregarding any standards about a minimum level of objectivity. Moreover, he was falsely placed vis-à-vis the AK Party chair and President, Recep Tayyip Erdogan, as the de facto rival of the Nation Alliance’s and CHP’s candidate. No need to say that this is not the case.

It is true that President Erdogan has also been delivering speeches along Binali Yildirim regarding the Istanbul mayoral elections. However, this does not mean that journalists from the Western world should disregard the AK Party’s mayoral candidate and his projections for the future of Istanbul. By this, it is weird to observe that most of the pieces that appeared in the Western media about the Istanbul elections focused on Erdogan rather than Yildirim and used a negative discourse, continuing their habit that has been accustomed for about 7-8 years now.

For instance, pieces from France’s leading media platforms and dailies portrayed Imamoglu as a “new hope of Turkish politics” (“nouvel espoir de la politique turque”) while openly disregarding the criteria of objectivity with regard to his rival Binali Yildirim (I,II). Similarly, the British media (III,IV) openly described Imamoglu “as a unifying power to take on Erdogan” without challenging and stressing various accusations towards Imamoglu. Furthermore, particularly media platforms in the United States, openly took positions supporting the CHP’s candidate, and, where also Imamoglu – a person running for being elected as a local politician– received the chance to publish a (Washington Post op-ed) article appealing to international audience (V,VI).

Of course, main support in the Western media still comes from Germany, where nearly every single politician who challenges the governing AK Party – no matter whether ultra-conservative, ultra-nationalist, Kurdish-separatist, etc- received media support without critical journalism. This happened and continues to happen during the 23 June election campaigns. For instance, titles such as “Istanbul candidate Imamoglu: Erdogan’s successor?” (VII) and its content or  articles mainly addressing the CHP’s candidate and President Erdogan (VIII,IV,X,XI) are not delivering satisfactory content about the recent election campaign, which at the end of the day was a quite fruitful period from a socio-political and democratic point of view.

People in Istanbul will decide on who will govern their metropolitan municipality for the next five years. Journalists and editors in Western media outlets continue their manipulative and biased behaviors and thus set a good example for the next generations about how this profession should not be done. Lacking any criteria for objectivity unfortunately is a fact of our post-truth world, no matter what the cost of losing ethical journalist credibility can mean in the long run.