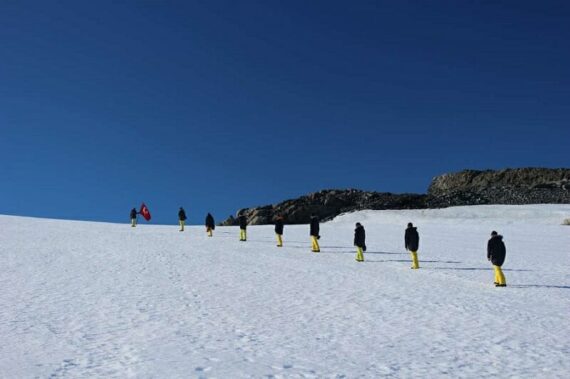 Turkish scientists (last week) have embarked on the second Antarctic expedition to further explore, collaborate and contribute towards bolstering international geographic research. Having completed the first expedition in 2016 with a group of 13 Turkish researchers from 7 Turkish universities, the current 9 person team hopes to further the prospects of a permanent research camp in the most remote region of the planet.

Initially proposed through a workshop held at the Istanbul Technical University (ITU) in 2013, Turkish scientists alongside state officials hope that the new prospects will not only boost Turkey’s scientific capabilities and research capacity, but also increase the diplomatic profile within the international scientific and political community.

The programme, being given the green light by the Ministry of Science, Industry and Commerce in 2014, has been primarily supported and funded by TUBITAK (The Scientific and Technological Research Council), Turkey’s leading national agency for the development of science, technology and innovation.

The expedition begun early March 2018, setting up a temporary research basecamp in Robert Island, intending to travel towards the largest Island in the archipelago, that of King George, and is expected to finish in mid-April. Upon reaching the King George base, the team will have the opportunity to engage with advanced forms of technology such as automated observing technologies, satellite remote sensing, Earth Systems models and improved sample retrieval technologies.

Collaborative research is the corner stone to being part of the scientific community on the Antarctic, where collectively topics ranging from climate change and the imprints of Humans on Antarctica, to exploring the life of psychrophiles; extremophorbic organisms capable of growth and reproduction in low temperatures are carried out. Discussions of topics such as life beyond Earth, space weather, the nature of the Dark Universe and the Origins of the Universe also play a part in bridging Antarctic research and discovery with life as we know it.

The Antarctic and Southern Oceans, being governed multilaterally by the Antarctic Treaty System signed towards the end of 1959, entering into force in 1961, has become not only a physical base wherein perspective scientists from party nations come together to explore and understand Earths coldest and least analyzed region, but in recent history has also become a platform for diplomatic cooperation and communication among the political entities of the world.

The Antarctic Treaty System as laid out by Articles 4 of the treaty does not recognize, dispute, nor establish territorial sovereignty claims (no new claims shall be asserted while the treaty is in force). The remaining 13 Articles stipulates that the Area (All of the land and ice shelves south of 60°S latitude) be used for peaceful purposes only, prohibiting weapons testing, allowing freedom of scientific investigations, and permitting access to inspect and exchange personnel from all stations provided prior notice be given.

Although Turkey has been a member of the Antarctic Treaty since 1996, due to no scientific research being carried out since, Turkey has remained a non-consulting member within the treaty. The step towards scientific discover will thus provide ground for Turkish state officials to apply for a consulting member status, permitting the opportunity to vote and actively engage diplomatically with regards to the preservation of the Antarctic. To date, there are currently 53 states party to the treaty, with only 29 (including the original 12 signatories) possessing consultative status.

Although Initially, the 9 person team, headed by female scientist and director of the Polar Research centre at ITU, Dr. Burcu Ozsoy, will be working with Polish, Belgian, Czech, Bulgarian and Chilean scientist, PolRec hopes to build a permanent base in order to coordinate and collaborate with multiple scientists from all corners of the world in contributing towards uncovering the hidden secrets of the last continent to be explored and studied.

Also Read
The Matter of the Doctorate (PhD) in Turkey