According to the statement released by the TSK, the de-escalation zones were created in order to “enhance the effectiveness of the cease-fire regime, end conflicts, bring humanitarian aid to those in need [and] establish the necessary conditions for the return of those displaced.” 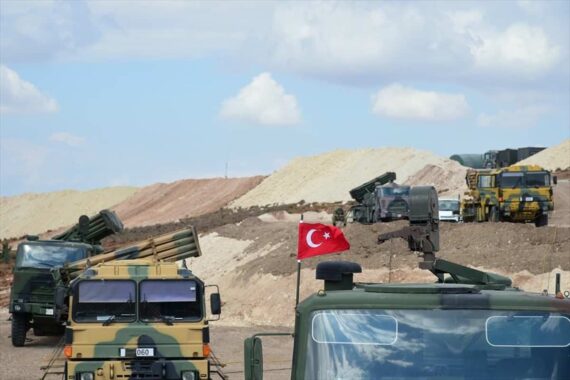 Turkish troops are seen after crossing into Syria’s Idlib province to monitor de-escalation zones that aim to bring an end to the six-and-a-half-year conflict, the military said Friday, on October 13, 2017. Anadolu Agency

Following Turkey’s Operation Euphrates Shield, which saw the Free Syrian Army (FSA), backed by Turkish forces, clear Daesh from the territory in north Syria between August 2016 and March 2017, the Idlib operation has been the second phase of Turkish direct involvement in Syria.

As a guarantor state within the Astana Talks, which Russia and Iran are also a party to, and as part of the mission to establish “de-escalation zones,” the main force of Turkish troops have entered Syria’s Idlib.

While the military convoys crossed from Reyhanli in southern Turkey’s Hatay province on Thursday night, the military announced that Turkish troops have crossed into Idlib in order to monitor de-escalation zones, with the aim to bring an end to the six-and-a-half-year conflict in Syria.

In a statement published by the Turkish Armed Forces (TSK), the military informed the soldiers had begun establishing observation points.

“Turkish Armed Forces elements that are to serve in the Idlib de-escalation zone have started their activities by establishing observation posts from Oct 12, 2017, as part of the Astana agreement…”

“The Turkish Armed Forces continue to carry out their duties in the territory within the engagement rules agreed by the guarantor countries in the Astana negotiations.”

During the weekend, reconnaissance teams entered Idlib as part of an international agreement to establish four de-escalation zones cross Syria.

According to the statement released by the TSK, the de-escalation zones were created in order to “enhance the effectiveness of the cease-fire regime, end conflicts, bring humanitarian aid to those in need [and] establish the necessary conditions for the return of those displaced.”

Also Read
Could the Turkey-Iran Rapprochement permanently solve the Syrian Crisis?
We use cookies to optimize your online user experience. To learn about our use of cookies and how you can manage your cookie settings, please see our Privacy Policy. By continuing to use our site you are excepting our use of cookies.Accept Cookies & CloseMore Info