The Russia-Ukraine War was a stark reminder for Turkey that complex aerospace and defense programs are important assets in foreign relations. 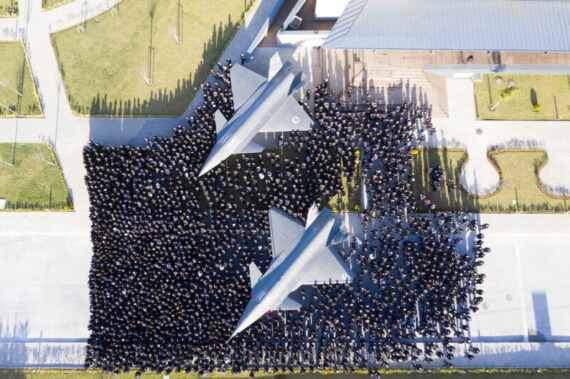 An aerial view show Baykar crew gathering to celebrate the maiden flight of Turkiye's latest fighter drone Kizilelma (Red Apple) during a ceremony in Istanbul, Turkiye on December 17, 2022. Chairman of the board and the chief technology officer of Baykar, Selcuk Bayraktar addressed the crew during a ceremony. Photo by Anadolu Images

n December 14, the Bayraktar Kizilelma jet-powered drone made its maiden flight from Çorlu airfield in Turkey. The achievement was announced by the Chief Technology Officer of the Baykar Technology firm, Selcuk Bayraktar. Capable of carrying various guided weapons inside its body and under its wings, the stealth drone is planned to enter serial production in late 2023. The Bayraktar Kizilelma is one of the very few jet-powered combat drone projects in the world. Other examples include Okhotnik by Russia, MQ-20 Avenger and XQ-58 Valkyrie by the United States, and WZ-7 Soaring Dragon by China.

Before the maiden flight, another important milestone in the development process of the aircraft was Kizilelma’s taxi test on November 20. This was praised by Ukraine’s ambassador to Turkey, Vasily Bodnar. Pointing to the Turkish-Ukrainian cooperation on the project, Bodnar stated in a tweet in Turkish that “it is a Ukrainian engine that lifts the Kizilelma to the sky”: the Kizilelma is powered by an AI-25TLT turbofan engine, designed by Ukrainian Ivchenko-Progress.

Kizilelma is the latest product that benefits from the Turkish-Ukrainian defense cooperation, which has expanded significantly over the past five years. The most well-known product of this cooperation is the Bayraktar TB2 armed drone, which has been extensively used by the Ukrainian armed forces since the start of the Russo-Ukrainian War on February 24. Drones have been at the center of the cooperation as Ukraine has become the engine supplier for the Akinci and Kizilelma drones. The issue has become particularly important because of Ukraine’s war with Russia and the recent bombing of the facilities of manufacturer Motor Sich by Russia on November 20.

On February 3, 2022, Turkish President Recep Tayyip Erdoğan and Ukraine’s President Volodymyr Zelensky signed an agreement on Turkish-Ukrainian cooperation in high technologies, aviation, and space. The agreement covered the manufacture of the Bayraktar TB2 armed drones in Ukraine through transfer of technology and know-how. Ukraine started acquiring the TB2 in 2019 for its air force and navy, and according to Ukrainian officials, local manufacture would be modified to incorporate local products and subsystems, such as a Ukrainian engine for the drones.

Three weeks after the signing of the agreement, Russian Armed Forces initiated a large-scale attack on Ukraine and started an invasion of the country’s southern and western parts. Since the start of the war, the TB2s have been used extensively, hitting many Russian armored vehicles and air defense systems. It is claimed that the drone participated in the missile attack on the Russian Black Sea Fleet’s flagship, Moskva, on April 13, which resulted in the sinking of the ship the next day.

Although the TB2 is the most popular product of the Turkish-Ukrainian defense cooperation and one of the symbols of Turkey’s defense exports, it is not the only area of collaboration in this Black Sea partnership: Ukraine has stood out as a major powerplant supplier for Turkey and has benefited from its indigenous solutions.

Under the umbrella of a military cooperation agreement signed on October 16, 2020, Ukraine ordered two MILGEM class corvettes, similar to the Ada class in the Turkish Navy. Ankara has been building four ships of a MILGEM variant for the Pakistan Navy. The lead ship, Hetman Ivan Mazepa (F211), was launched on October 2 by RMK Shipyard in Tuzla, Istanbul. Under the agreement, the ship was to be delivered to Ukraine for installation and integration of weapons and systems at the end of 2023, but the war with Russia has negatively impacted the project.

Earlier it was reported that Ukraine was planning to install domestically manufactured gas turbines on the ship, instead of the American General Electric LM2500, which is being used in the Turkish and Pakistani MILGEMs. Zorya Mashproekt is one of the world’s leading marine gas turbine manufacturers and before the annexation of Crimea, it was the sole source for many of Russia’s naval shipbuilding programs. The fallout between Russia and Ukraine therefore has, among others, inflicted a severe blow to Russian naval projects. Zorya Mashproekt formed a joint venture (JV) named “Lodos Propulsion” with Baykar Technology in September 2020 whose main field of activity was stated as the design, development, and manufacture of marine gas turbines and associated subsystems.

Lodos Propulsion is not the only Turkish-Ukrainian JV in the defense sector. Before this, in 2019, Baykar Technology formed the first JV with a Ukrainian firm: 51% of the company Black Sea Shield is owned by Baykar Technology and 49% by Ukrspecexport. The company states its areas of interest as development, manufacture, and trade of turbine engines for drones, missile and electronic warfare systems, and guided weapons. One of the Black Sea Shield’s most important projects was reported to be the joint development and manufacture of the Akinci armed drone’s turboprop engines.

Read: Ukraine’s Military Transformation between 2014 and 2022

The Bayraktar Akinci is a heavy reconnaissance-surveillance and strike drone. With a maximum take-off weight of around 6,000 kg, the Akinci is designed to be equipped with various precision guided missiles and bombs, and different types of sensors, such as electro-optical camera, radar, and electronic intelligence/signals intelligence (ELINT/SIGINT) systems. Akinci is designed to be able to be equipped with engines. The baseline model, Akinci A, is powered by Ivchenko-Progress AI-450T, whereas Akinci B is equipped with Pratt & Whitney Canada PT6A-135A engines. During the SAHA Expo exhibition in 2021, Baykar Technology signed an agreement with Motor Sich for the MS500 turboprop engine.

At the same time, another agreement was signed with Ivchenko-Progress for the AI-322F and AI-25TLT turbofan engines for the Bayraktar Kizilelma. The AI-25TLT is powering the A version of Kizilelma, and the AI-322F will be used in the B model. According to Baykar Technology information, Kizilelma C will have two AI-322F engines and will be able to fly faster than the speed of sound.

Engine procurement from Ukraine is not limited to drones. In June of last year, Turkish Aerospace (TA) signed a contract with Motor Sich for TV3-117 turboshaft engines for use in the prototypes of the T929 ATAK 2 next-generation attack helicopter project. The Ukrainian company is also offering the same engine for TA’s T925 10-ton class general purpose helicopter project. TA plans to fly T929 for the first time in March 2023.

In addition to marine and aviation domains, there have also been talks over cooperation in the land vehicles sector. Ukrainian heavy vehicle engine and armored vehicle manufacturer Kharkiv Morozov Machine Building Design Bureau (KMDB) proposed a cooperation with Turkey on various fighting vehicles, namely Altay main battle tank and Firtina self-propelled howitzer. The sale of the latter to Azerbaijan was stalled because of Germany’s refusal to supply the engine and transmission, whereas the failure to obtain the engine and transmission from Germany for the Altay main battle tank prompted Ankara to look for alternatives, ending up with a South Korean solution.

Read: Why Hypersonic Weapon Systems Are Critical for Russia

After the dissolution of the Soviet Union, Ukraine inherited the large research, development, and production enterprises specialized in gas turbines. Ivchenko-Progress and Motor Sich focus on aviation engines, with the latter being one of the leading manufacturers of aircraft and helicopter engines in the world. Based in Zaporizhzhia, privately owned Motor Sich also provides services for maintenance, overhaul, and upgrade of engines. Ivchenko-Progress, on the other hand, is a state-owned design bureau specialized in aviation engines, including gas turbines. The two companies work very closely: Motor Sich, while producing its own designs, also acts as a manufacturer for Ivchenko-Progress.

Motor Sich’s great experience in design and manufacture of aero engines made it a lucrative investment opportunity, especially for China. In 2017, the Chinese firm Skyrizon Aviation bought a 41% stake in Motor Sich. This agreement was met with a harsh reaction by the U.S., and subsequently shelved after Ukrainian President Zelensky took the decision to impose sanctions on Skyrizon in January 2021. Although there were reports that 50% of the company’s shares could be sold to an undisclosed Turkish company in May 2021, this did not happen.

The owner of Motor Sich, Vyacheslav Boguslayev, was taken into custody by the Ukrainian intelligence on October 22 on charges of treason for providing engine parts to Russia. It was alleged that the owner of the company, which manufactures engines for Mil and Kamov helicopters and provides maintenance and repair services, made a secret agreement with Russia, which had maintenance, repair, and logistics support problems due to the ongoing war.

On November 7, the management of Ukraine’s five leading companies, including Motor Sich, was transferred to the Ministry of Defense in accordance with the “Law on the Transfer of Goods Under Martial Law.” On November 20, the company’s production facilities were severely damaged after a missile attack by Russia. It is still unclear how much damage the production infrastructure and capacity have suffered, and how this will affect the Kizilelma, the Akinci, and the T929.

Turkish-Ukrainian defense cooperation has rapidly expanded in the past five years, covering many complex programs and products. The most important aspect of this partnership is engine development and production. Having many ambitious aerospace development projects, Turkey has a stated goal of achieving self-sufficiency and independence in many critical components, including engines for its indigenous air, sea, and land platforms.

TUSAŞ Engine Industries (TEI) and Kale are the two major companies that are active in this field, and their projects have recently entered the test and production phase. TEI’s TF6000 and TF10000 engines are promising candidates for powering the Kizilelma and other platforms that Turkey will develop. Delivering an aero engine for a high-performance combat aircraft whether piloted or not, however, is a challenging task, requiring extensive infrastructure, skilled workforce, and an industry ecosystem. China, for example, has gone through a similar path for the past 25 years with the assistance of Russia and Ukraine.

Achieving operational independence is Turkey’s top priority when devising defense planning and industrial strategies. In order to increase the local content and indigenous solutions, a “top-down” approach has been selected: Turkey first started with platform projects such as Altay, Anka, and MILGEM, and then went for indigenization of the major subsystems and components of these platforms. Engine, transmission, and associated technologies are the most crucial elements of this endeavor. A reliable partner is therefore important to avoid risks, unnecessary cost, and uncertainties. Ukraine is a good candidate for being such a partner, since it is possible to establish a defense industry-military partnership with benefits for both sides.

That said, there are realities that may or may not limit Turkey’s opportunities. The most obvious and important risk factor is Russia’s invasion and war with Ukraine and all the political, military, industrial, and financial uncertainties it has produced since February 24, 2022. Turkey’s relations with the two warring sides are both crucial and fragile. Managing these risks is a challenging task, even more so than the challenges involved in developing an indigenous engine. In the end, the Russia-Ukraine War was a stark reminder for Turkey that complex aerospace and defense programs are important assets in foreign relations.