Ukrainian fierce resistance against Russia has surprised many observers. The story of how this happened goes back to 2014. 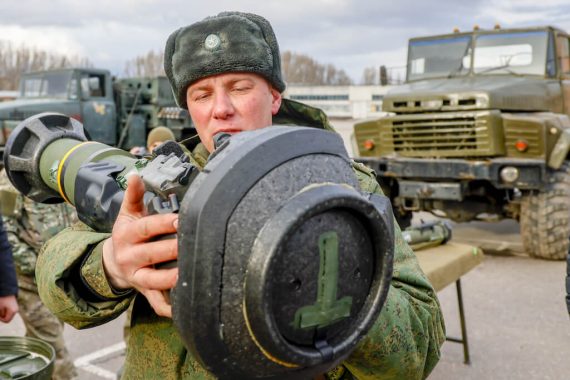 Tanks, multi-barreled rocket launchers and anti-tank vehicles as well as various armored vehicles belonging to Ukrainian army are brought to the Luhansk region after being captured by Russian military forces in Tryohizbenka village of Luhansk region in eastern Ukraine on March 27, 2022. Photo by Sefa Karacan, Anadolu Images

On February 24, 2022, the Russian Federation started a wide-scale attack on Ukraine, referred to by Moscow as a “special military operation.” Russia demanded that Ukraine halts its military activity, enshrine neutrality in its constitution, acknowledge Crimea as a Russian territory, and recognize the independence of the Donetsk and Lugansk People’s Republics. Ukraine’s deepening ties with the West and its ambitions to join NATO were harshly criticized by Moscow.

Russia’s annexation of Crimea in 2014 was a traumatic experience for Ukraine and for its armed forces. Many high-ranking commanders and high-level bureaucrats fled to Russia during and right after the annexation. Simultaneously, armed conflict erupted in the Donbas region in the eastern part of the country in March 2014 when the Donetsk and Luhansk Oblasts declared independence from Ukraine.

Supported by Russia, separatists in Donbas inflicted significant losses to the Ukrainian army, which was suffering from widespread defections and loss of chain of command. By early 2015, Ukraine’s anti-terrorist operation (ATO) against Donbas separatists had achieved limited success in regaining control of a sizeable portion of the Donbas region, while as a result of a more active involvement by Russia, the Ukrainian army lost many personnel and equipment.

Ukraine started a massive reorganization and modernization process of its armed forces in late 2014. The Donbas experience and the threat assessment with regards to Russia dominated this transformation process. In order to increase its warfighting capability, structural reforms in command and control, training, education, and infrastructure were initiated. This organizational and capability transformation offers many clues about the impact of defense policies on foreign relations and even geopolitics.

As the first step towards transformation, Ukraine issued the Strategic Defense Bulletin in 2016, which laid the framework for the necessary reforms for the Ukraine armed forces to achieve NATO standards. The subsequent “State Program for the Development of the Armed Forces” for the period of 2017-2020 outlined the implementation steps towards this transformation. To develop the defense planning mechanism, the “Law on National Security” was passed in 2018. This law established a framework to coordinate and simplify Ukraine’s defense planning and to establish civilian control over the military.

At the outset, the main aim of the reforms was determined as to bring the armed forces and the defense industry in alignment with Western standards, as well as making the armed forces interoperable with NATO and EU forces, especially in international deployments. By 2020, this plan had been revised and interoperability with NATO became a top priority.

In terms of organization, Ukraine made major changes within its armed forces. First of all, the posts of commander-in-chief (CINC) and chief of General Staff (CGS) were separated. The CINC was tasked with the overall combat readiness and improving capabilities of the armed forces units, the National Guard, and the State Border Service.

The CGS, who reports to the CINC, was made responsible of determining military capabilities and resource requirements; operational and modernization planning, military training, and support needs; and the allocation of equipment.

The 10-year procurement plan, which was prepared by the CGS, outlined the priorities of the Ukrainian armed forces. Special emphasis was given to special operations forces, artillery and missile systems, army aviation, drones, coastal artillery, and air defense systems. The special operations forces were given the top priority in terms of equipment, training, and overall readiness standards.

As part of these transformation efforts, Ukraine also made important reforms in its reserves. The system was completely changed in 2020 and three reserve components were created: the operational, mobilization, and civilian reserves. The operational reserves are the first-line reserves that are basically replacement units with combat experience for front-line units.

Reservists in this category are assigned to specific military units so these can be brought to wartime strength if required. The civilian reserve consists of citizens who volunteer for defense and national-security tasks.

The army had the biggest share in Ukraine’s defense procurement plans. Special emphasis was given to improve the capabilities of artillery and missile forces through new development, acquisition programs, and modernizing Soviet-era artillery systems.

One of the most important and well-publicized programs was the Javelin acquisition from the United States. Ukraine took delivery of hundreds of Javelin anti-tank missile systems from the U.S. as part of a security assistance program. Under this program, the United States transferred weapons and equipment worth $2.7 billion to Ukraine between 2014 and early 2022.

In addition to the Javelin, Ukraine also ran local development and upgrade programs to improve its anti-tank capabilities. The Ukrainian defense industry produced Stugna-P and Korsar missile systems, while vehicle-based anti-tank systems were upgraded with new missiles and systems.

Another pillar of the army procurement was artillery modernization. Ukraine started several multiple rocket launcher system (MRLS) projects, the most important being the Vilkha precision MRLS development. Artillery locating radars, battery command, and control systems were also acquired. To improve the efficiency of the artillery units, drones were incorporated as forward observation and fire coordination elements. Ukraine put special emphasis on the training of artillery units until 2022.

The country focused its efforts on increasing the serviceability, and the command, control, communications and intelligence (C3I) infrastructure of its air defense network. For the combat aircraft fleet, it started avionics and structural upgrades for the Su-27, MiG-29, and Su-25 aircraft in order to increase their service lives until the 2030s.

The Ukrainian Navy adopted a new doctrine, commonly known as the “Mosquito Doctrine” in 2018. This doctrine called for acquisition of several small-sized, fast and agile attack class patrol boats, equipped with guided missiles. These boats would conduct hit-and-run attacks against the Russian Navy, especially in the Sea of Azov.

For the upgrade of its major combatant fleet, Ukraine signed a contract with Turkey in December 2020 for the acquisition of MILGEM class corvettes. Under the contract, Ukraine was to get four corvettes, which were to be equipped with Ukrainian-made gas turbines and several other local subsystems. As of February 2022, the first ship was under construction in Turkey and the rest were planned to be constructed in Ukraine under license.

Read: Intelligence in the Russia-Ukraine War

The cooperation between Ukraine’s defense industry and Turkey has been in the spotlight, with the Bayraktar TB2 armed drone arguably standing out as the most important topic.

After Qatar, Ukraine became the second export customer of Turkey’s Bayraktar TB2 armed drone, with a first batch of six drones delivered in 2020. This contract was followed by a second one for the Ukraine Navy for surveillance missions over the Sea of Azov against Russia.

During President Recep Tayyip Erdoğan’s visit to Kyiv on February 3, 2022, Erdoğan and his Ukrainian counterpart Volodymyr Zelensky signed an agreement for the establishment of a facility for the manufacture and maintenance of Bayraktar TB2 drones near Kyiv. According to Ukrainian officials, the Ukraine version of the TB2 would be powered by a locally produced engine.

Turkey’s sale of armed drones to Ukraine had frequently been the target of harsh criticism by Russia. The TB2, however, is not the only item of the rapidly enhancing defense industry cooperation between Kyiv and Ankara. Ukraine had become a preferred supplier for Turkey, especially for engines. Ukraine’s two major firms in aviation engine design and manufacture, namely Motor Sich and Ivchenko-Progress, were actively cooperating with Turkish defense contractors.

Read: Where Belarus and Belarusians Stand on the War in Ukraine

In addition to drones, Turkey also signed contracts for the procurement of turboshaft engines from Ukraine. Turkish Aerospace (TA) signed a contract with Motor Sich to purchase the TV3-117 turboshaft engines in June of last year to be used in the prototypes of the T929 ATAK 2 next-generation attack helicopter project. The Ukrainian company also offered the same engine for TA’s T925 10-ton class general purpose helicopter project.

The Ukrainian heavy vehicle engine and armored vehicle manufacturer Kharkiv Morozov Machine Building Design Bureau (KMMB) was cooperating with Turkish companies on various fighting vehicles, namely Altay main battle tank and Firtina self-propelled howitzer. The sale of the latter to Azerbaijan was stalled because of Germany’s refusal to supply the engine and transmission.

According to various press reports, Ukraine wants to integrate gas turbine manufactures by Zorya Mashproekt to its MILGEM class corvette, which is constructed by Turkey. The MILGEM sale to the Ukrainian Navy is one of the biggest defense exports of the Turkish defense industry.

The fierce resistance shown by Ukraine against Russia and the failure of the latter to achieve a quick and decisive victory has surprised many observers. After overcoming the initial shock of the Russian attacks on February 24, the Ukrainian armed forces managed to start a defensive campaign based on dispersed small units equipped with modern anti-tank weapons, thousands of which have been supplied by the West to Ukraine.

These small units, supported by well-trained and well-coordinated artillery units and drones, inflicted significant losses on the advancing Russian troops and their logistic support lines. Russia, which has surprisingly not established air supremacy over Ukraine from the outset of the invasion and presumably fell victim to the overconfidence of its own capabilities, failed to reach the declared objectives of demilitarizing Ukraine and ousting the Zelensky government after the first month.

Ukraine’s abilities in establishing a flexible defense may be explained by a combination of factors. First, the Ukrainian armed forces seem to have derived lessons from the conflict in Donbas in 2014, and successfully adopted them into the doctrine and training of the army units.

Second, acquisition priorities were defined properly, i.e., focusing on anti-tank weapons, artillery, and drones as well as special forces equipment. Third, training, advisory, and intelligence support from NATO countries has contributed to increasing the warfighting capacity of the Ukrainian army. And lastly, the Ukrainian government has been successful in mobilizing the nation in forming a defense and executing an information war.

All in all, the organizational reforms and armament programs run by Ukraine between 2014 and 2022, and the military and intelligence support by Kyiv’s allies seem to provide a good case study for the relationship between defense policies and foreign relations. 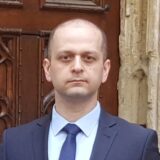