UN Report says access to and equitable distribution of water has been a major concern since Israel's control of the West Bank in 1967. 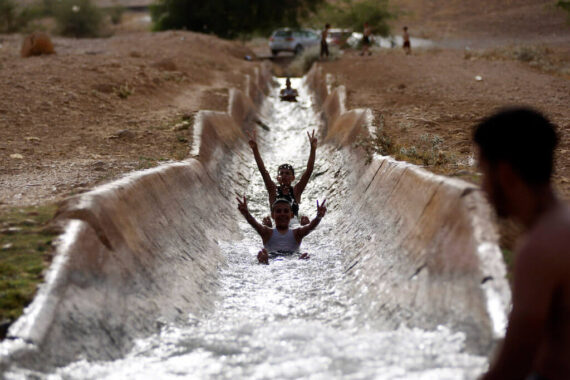 Palestinians are seen at the al-Auja lake as the weather is above-average warmth in Eriha, West Bank on May 27, 2015. Photo by Shadi Hatem, Anadolu Images

Water has been acknowledged by the United Nations as crucial to the fulfilment of all human rights as a key element of life and sustainable development. Water that is safe, clean, accessible, and cheap is an essential component of the right to life, an acceptable standard of living. Despite this, Palestinians who in the occupied Palestinian territories continue to face serious water shortages.

During the COVID19 pandemic, the limitation of access to water and the impact of increased demolitions on WASH infrastructure are of particular concern, a recent UN report noted. The pandemic has acted as a stark reminder of the significance of water, putting even more strain on communities already struggling to get clean, cheap water. The inability of afflicted homes to take preventative measures and curb the spread of the virus is severely hampered by a lack of access to water. As a result, Israel’s ongoing targeting of WASH infrastructure exacerbates an already grave security situation.

The Palestinian population in the West Bank is one of the world’s fastest growing, and so is their need for water. However, since Israel‘s control of the West Bank began in 1967, meaningful access to and equitable distribution of water has been a major concern. The Occupied Palestinian Territory’s population is now estimated to be 5.2 million, with a projected growth to 7.2 million by 2030.

The Jordan River, which supplies the majority of the Occupied Palestinian Territory’s available surface water, is now inaccessible to Palestinians. Previous ideas, like the 1955 Johnston Plan, aimed to divide the Jordan River’s waters among the coastal nations, with the Palestinians receiving roughly 200 million cubic meters per year through the projected West Ghor Canal.

Military Order 158, issued by Israeli authorities in November 1967, declared that Palestinians may not construct any new water facilities without first receiving permission from the Israeli army. Since then, extracting water from any new source or developing new water infrastructure has necessitated obtaining licenses from Israel, which are very hard to get. Palestinians living under Israel’s military occupation are still suffering the repercussions of the occupation.

In addition to being prohibited access to the Jordan River and freshwater springs, they are unable to dig new water wells, install pumps, or deepen existing wells. Israel even regulates the collecting of rainwater in most of the West Bank, and Palestinian villages’ rainwater harvesting cisterns are frequently damaged by the Israeli army.

The Interim Agreement’s Article 40 lays out the rules for water administration between Israelis and Palestinians. It specifies not only how it should be divided, but also how the shared resource should be maintained and what efforts each side should take to ensure water sustainability and coexistence. (A) Palestinian Water Rights in the West Bank are recognized and shall be negotiated in the Permanent Status Agreement. (B) Establishment of a permanent Joint Water Committee (JWC) to deal with all water and sewage related issues in the West Bank. All decisions of the JWC shall be reached by consensus. (C) Recognition from both sides of the necessity to develop additional water for various uses. (D) Existing water and sewage systems shall be operated, maintained and developed in a coordinated manner.

In the occupied West Bank, Israel imposes severe military law and enforces segregation, with Palestinians being mainly barred from accessing settlements which inevitably affects access to water. Israel is given four times the Palestinian share of water resources under the Oslo II Accord, but it has been found that Israel has been taking 80 percent more water from the West Bank than it committed to.