UN Roadmap to Peace in Libya: Will Khalifa Haftar be left on the Sidelines?

The approval of Salamé’s roadmap is crucial for Haftar, as it will give start to a political process that will thwart Haftar's strategy of “militarizing the state.” Similarly, it creates political risks for regional actors that have supported Haftar up until now. 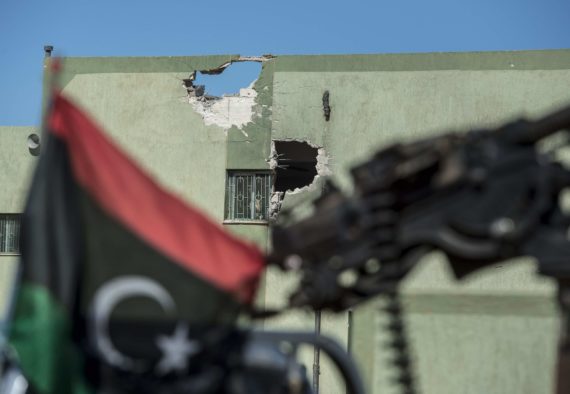 A school gets damaged due to artillery shooting in the Zintan region, Libya. Anadolu Agency

Why did the House of Representatives approve the UN’s roadmap?

By approving Salamé’s roadmap with a decision in November, the HoR made a game-changing move that undermines Khalifa Haftar in Libya. Approval of the roadmap indicates that the power balance in the eastern regions have shifted and further implies that these power balances may shift in Libya as a whole. Yet, what pushed the HoR, which has been supporting Haftar, to favor a political resolution?

Haftar has been increasing pressure over the eastern regions for the last two and a half years by expanding military precautions. He implemented a protocol in regions under his control which disregarded the HoR administrators as being “the highest political and military authority in Libya.” Maintaining his seat in center of the protocol, and by placing HoR President Aguila Saleh two seats away from himself, in which the HoR President was sat beside Haftar’s advisor, Haftar attempted to convey the message that he is the highest authority in Libya. Appointed by the Presidential Council, which is recognized as the official authority of Libya by the UN, the Ministry of the Interior Deputy Undersecretary Faraj Ghaim, faced several assassination attempts in Haftar-controlled eastern regions. Ghaim, also a member of a prominent tribe in the eastern region, announced that Haftar was behind these assassination attempts. It’s not difficult to assert that this caused tribes in the east to question Haftar. Moreover, Haftar’s sons have begun to become more prominent in the eastern region. Tribes supporting Haftar are thus losing hope that he will grant more power to them. In addition, reports submitted to the UN concerning Mahmud Warfalla, commander of Haftar’s private forces, stating that he has been committing “war crimes” and the revelation of mass graves in Abyar, indicates the possibility of Haftar being dubbed as a war criminal in the international arena. All of these developments forced actors within the House of Representatives to secure their own futures by leaning towards a political resolution.

Khalifa Haftar’s making as an actor

Although the House of Representatives has forced Khlifa Haftar into a no-escape-zone by accepting the roadmap proposed by the UN, they had initially been among the first ones who contributed to Haftar’s political leadership. By refusing to sign the LPA that emerged as a result of UN-led negotiations between late 2014 and late 2015, the HoR was undermining the Presidential Council created by the UN. Moreover, the HoR legitimized Khalifa Haftar, who had attempted a coup in May 2014 and allowed him to control the eastern regions of Libya through military means. Haftar employed the political legitimacy courtesy of the HoR in order to replace elected mayors with military ones, with the aim to deadlock the institution’s decision-making mechanisms. He was also welcomed at the highest level during his visits especially in Egypt, the United Arab Emirates (UAE) and Russia, creating the image that he was the leading actor in Libya. In fact, Haftar was announced as party to negotiations regarding Libya’s political future, which were held at France’s presidential palace through President Macron’s initiative to “bring conflicting sides together.” On the other hand, Haftar was able to expand his military influence through operations in Benghazi, Jufra in the southwest and Tamanhint in the south.

By refusing to approve the political resolution proposed by the UN up until now, thus preventing the political process, the HoR’s approval of Salamé’s roadmap is a break in its modus operandi. Haftar prevented the HoR from approving the proposed political resolution as it would eliminate the chaotic environment which transformed him into an actor in Libya. Regional and international actors supporting Haftar were presenting the approval of HoR presidency in Haftar-controlled Tobruk as a must. In this situation, as a political resolution could not be implemented, not only was Haftar acknowledged by neighboring and western countries, he also continued to realize military operations on the field. The approval of Salamé’s roadmap is crucial for Haftar, as it will give start to a political process that will thwart his strategy of “militarizing the state.” Similarly, it creates political risks for regional actors that have supported Haftar up until now.

Haftar: a dead-man for the UAE?

While Haftar was clearly a component of the regional project that is represented by the UAE, will the UAE, which has been working against the Arab revolution since 2012 and which has been supporting Haftar, renounce him? The UAE preferred to collaborate and cooperate with a military regime in Libya, as was also the case in Egypt. However, since 2014, Haftar has been unable to achieve what he was expected to by the UAE – he was unable to completely control Benghazi and thus the tribal alliance supporting him began to dissolve. Openly supporting the Presidential Council, the Awagir tribe has become the most overt manifestation of schism in the eastern region.

As was expressed, the schism between the House of Representatives and Haftar continues to deepen. While pressure is building on Haftar, the UAE seems to be seeking a two-way solution. Firstly, as was seen at the meeting in Egypt to which Misurata was also invited, the UAE is clearly seeking an ally in the western region through Egypt. Moreover, certain militia leaders in Tripoli visiting the UAE are frequently being discussed in the field. Meanwhile, armed groups belonging to Madkhali Salafism are gaining ground in the western regions as a result of Muhammad bin Salman’s purges in Saudi Arabia – which is also an ally of the UAE. There are also talks about Madkhali Salafis gaining more ground in Misurata. It should be noted that Madkhalism is a religious-ideological base of the UAE’s regional strategy. Considering this information, it could be asserted that the UAE is preparing for a scenario in which Haftar is eliminated as an actor. Secondly, considering that the former UN Special Representative in Libya, Bernardine Leon, was appointed as the President of the UAE Diplomacy Academy, it’s not difficult to predict that the UAE is in search of a new engagement with political and diplomatic actors along with the military. A political resolution means re-dealing cards for Khalifa Haftar and in such a scenario, Haftar will lose all traits that make him powerful and will be in a new political conjuncture.

Taking all of this into consideration, the following question should be asked: Is it possible to form a democratic state in Libya, in which power is transferred peacefully and the military is a subservient of the civilian administration, through the UN’s initiative? To answer this question, one should realize that the regional vision represented by the UAE is an order relying on introverted military-bureaucratic regimes and Madkhali Salafism, an archaic interpretation of Islam. In order to understand what has transpired throughout the last six years in other countries of the Arab Spring, regional activities of the UAE-led coalition should be analyzed. For this reason, it’s easy to assert that the aforementioned alliance will be dissatisfied with the Libyan revolution transforming into a political process. In this respect, Salamé has to be cautious in order not to have his roadmap suffer the same fate that the previous UN Special Representatives in Libya have attempted to implement and to be wary of those who may attempt to block suggested political processes.