Government of National Unity: Where Does Libya Go from Here?

Libya now has a new executive authority. If the GNU is endorsed, it replaces the GNA, a government that likely could have been sufficient had it received more material support from the international community. 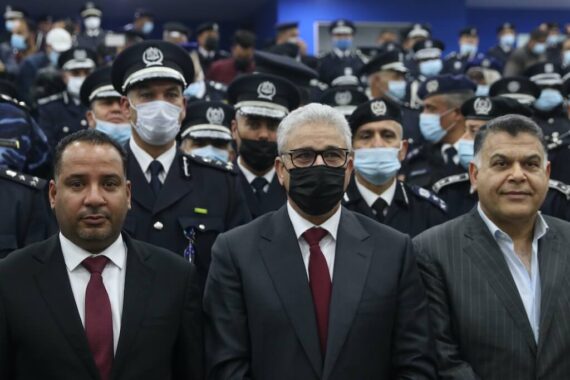 Libyan Interior Minister Fathi Bashagha is seen before making a speech at the ministry building on the new interim executive authority elected in the United Nations-led dialogue, the peace process in the country and the problem of corruption in Tripoli, Libya on February 09, 2021. Photo by Mucahit Aydemir, Anadolu Images

Libya recently saw the conclusion of the Libyan Political Dialogue Forum (LPDF), a peace process under the United Nations’s (UN) auspices. Its primary outcomes were an election date, set for December 24, 2021, and a new executive authority. The composition of the latter was a widely unexpected climax. In a process outwardly reverse-engineered to facilitate one result, the winning list of four candidates did not include the projected heavyweights.

Indeed, the combination of the Government of National Accord’s (GNA) Interior Minister Fathi Bashagha and the Tobruk-based House of Representatives (HoR) Speaker Aguila Saleh proved to be too toxic in list-form. The former had alienated some Tripoli armed groups and built rapports with adverse factions, while the latter damaged his political brand by legitimizing eastern ex-General Khalifa Haftar’s military adventures.

The winning list was not actively endorsed by LPDF delegates; it was more a case of voting against the other option, or, alternatively, “voting as veto.” Correspondingly, it was less ideology than opportunism that united the new executive authority. This can be both a boon and a bane – the former as it offers novel openings for pragmatism because this quadruplet has less baggage, and the latter as the lack of concinnity and the reliance on kickback-giving may prove to be unsustainable.

The designated Prime Minister (PM) and head of the Government of National Unity (GNU), Abdelhamid Dabaiba, is a wealthy and transactional businessman with handy experience in the construction sector. He has been angling for this position for some time, and was also part of the 2017 Misratan delegation to Moscow. His unscrupulous nature comes with drawbacks, however, as corruption allegations – he has links to his cousin Ali Dabaiba, a moneyed Gaddafi-era procurement official – and vote-buying accusations have bogged him down.

The new Presidential Council (PC) consists of three members, one for Libya’s historical three provinces. The member for Cyrenaica, and President-designate of the PC, Mohammed al-Mnefi, is from Tobruk. He markedly neither supported nor denounced Haftar’s offensive on Tripoli, and therefore how far his influence reaches in eastern Libya is still unclear.

A member of late Libyan hero Omar al-Mukhtar’s tribe, he was previously Tripoli’s ambassador to Greece, though he was expelled after the GNA’s maritime agreement with Turkey (Athens has ironically announced it intends to reopen its Libyan embassy).

Al-Mnefi recently met with Haftar in Benghazi; with accountability calls disregarded in modern-day Libya, this is a critical time for al-Mnefi to establish whether he will be the politician to demonstrate the east is not monolithic or if he will fall victim to recurrent missteps. His ambitious priorities in this 10-month preparatory period are military and institution unification, as well as national reconciliation.

The member for Tripolitania, Abdullah al-Lafi, is from Zawiya and a moderate HoR parliamentarian, while the member for Fezzan, Mossa al-Koni, is a Tuareg born in Ghadames; he was part of the HoR then the GNA’s PC before resigning in January 2017.

Notably, the LPDF process was top-down and did not have the domestic legitimacy that comes from representative elections. Widespread disenchantment with elite-level politicking a decade after Gaddafi’s downfall means elections must be given precedence.

A fighter of Libya's UN-backed Government of National Accord (GNA) of Fayez al-Sarraj, takes his position during clashes with the forces of the self-styled Libyan National Army (LNA) led by Libyan strongman Khalifa Haftar. Photo by Amru Salahuddien, Picture Alliance via Getty Images

Considering the Saleh-Bashagha duo’s possible qualms with the executive authority’s on-paper transience had they won – candidates pledged not to run for December’s elections if selected – this result may be more propitious in the long-run. This is the silver lining; as they are permitted to run, this may make them more vested in seeing them happen.

Dabaiba’s likely balanced cabinet, which he has stated will include carrots for key constituencies and placate individuals like Bashagha, also needs the HoR’s approval. Yet, in an astute move by the United Nations Support Mission in Libya (USMIL) that suggests some past lessons are being learned, if the HoR fails to grant confidence (as Saleh recently threatened and given his post-Libyan Political Agreement actions), the responsibility will be transferred to LPDF delegates.

This crystalizes the rubber stamp nature of the HoR, which has planned a preliminary session— though its circumvention might provide a pretext for prospective spoilers such as Saleh and Abdullah Thinni, PM of the east-based Interim Government. While it would also be a polarizing issue at the LPDF (given February 5’s disapproval voting dynamics and the winning ticket still only earning 53 per cent), the prospects for pragmatism increase.

Having its eggs firmly in the Haftar basket, the UAE remains to be seen whether this new status quo will prove to be satisfactory.

As ever, the response of international sponsors will be vital. Although the expected carousel of lip-service did transpire, there can be a sharp dichotomy between what is said and done vis-à-vis Libya, as the last decade has exhibited. Indeed, how Egypt responds to seeing its preferred candidate Saleh lose will be consequential.

Whereas it would have liked to retain the HoR as an excuse to safeguard its perceived interests, UNSMIL’s foresight means that option is no longer directly on the table – though the precarious constitutional process it is hosting remains available. Conversely, backing December elections in good faith could be seen as risky in Cairo as it may stand to lose considerably if they are held fairly.

Another relevant actor is the UAE and how it chooses to respond. Having its eggs firmly in the Haftar basket, it remains to be seen whether this new status quo will prove to be satisfactory. Haftar has incidentally been elevated again at the expense of Saleh, who may lose his HoR speakership to a parliamentarian with Fezzan origins. Nevertheless, strong doubts persist as to whether Haftar’s powerbroker status is merited or merely imposed by his foreign backers.

For Turkey, it will be mostly content by this outcome; it has good relations with PM-designate Dabaiba, a Misratan who gave his first interview to a Turkish outlet and called it an “ally, friend, and a brotherly state.”

For Russia, its primary interests are preserving its influence in Libya, ideally with a military installation in Sirte, Jufra, or both. Given it implausibly insists on Private Military Company Wagner’s independence from Moscow, it is expected to keep working both sides. If regular Libyans are on board is another matter – protests recently resumed in Houn, a town beside Jufra Airbase, demanding the departure of mercenaries.

Moving forward, Libya now has a new executive authority. If the GNU is endorsed, it replaces the GNA, a government that likely could have been sufficient had it received more material support from the international community. In any case, facilitating elections in December remains the priority.

Indeed, although some patronage networks have been disappointed, others have been revitalized. There remain serious concerns, including the October Ceasefire’s clauses not being respected (some progress is now being made) and prospects of conflict relapse not being low, but there are dovetailing positives, such as an invigorated U.S. Administration and a unified budget (despite compelling the underwriting of Haftar’s Offensive costs).

There is also a new UN Special Envoy to Libya, Ján Kubiš, and he has a tremendous job ahead following Stephanie Williams’s footsteps, including helping prevent the new executive authority from falling apart at the seams. While success is supposedly a journey not a destination, this proverb may not apply for Libyans hoping to see the end of their post-2014 journey and legitimate elections be held.

Noamane Cherkaoui is a Morocco-based analyst who researches North Africa geopolitics and security. His main focuses are Libya’s socio-security dynamics and its regional environment. He graduated from the University of Otago in New Zealand with the Dean’s Award. He is also a postgraduate in International Relations at the University of Leicester, with his dissertation being on external interference in Libya’s Civil War post-2014.