The 23-page report recommends that the UN member states develop a “plan to end the Israeli settler-colonial occupation and apartheid regime.” 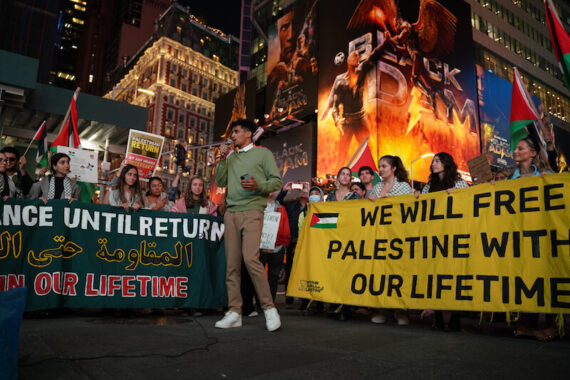 Protesters are gathered at the Times Square as "Free Palestine" rally to protest Israel's aggression on Gaza in New York City, United States on October 14, 2022. Photo by Anadolu Images

n September 21, 2022, Francesca Albanese, the UN Special Rapporteur on the situation of human rights in the Palestinian territories since 1967, submitted her first report on Palestine to the UN Human Rights Council. The report calls for ending colonialism and for the Palestinian people to exercise their right to self-determination.

The report is considered groundbreaking as it is the first UN comprehensive report that refers to the situation in Palestine as colonialism and calls for ending it, noting that the Palestinian people have the right to resist the foreign rule.

In the course of preparing the report, Albanese made attempts to reach out to the representative of Israel at the UN Human Rights Council, who didn’t answer her calls.

The report calls for the right of the Palestinian people to self-determination and explores the legal implication of this right, noting the difficulties of implementing this principle due to the realities created by the Israeli occupation.

On April 1, 2022, following the conclusion of its 48th session, the UN Human Rights Council announced the appointment of Albanese as the new UN Special Rapporteur on Palestine, a move which was welcomed by the Palestinian Authority. Israel has denied Albanese access to the West Bank and Gaza, and accused her of adopting an anti-Israel position.

The Palestinian Commission of Detainees’ Affairs welcomed the report, noting that it addressed a number of human rights concerns, particularly in regard to the right of the Palestinian people to self-determination “in the context of the settler-colonial features of the prolonged Israeli occupation.”

According to Albanese, “The violations described in this report reveal the nature of the Israeli occupation: a deliberate, racist, and repressive regime of appropriation aimed at preventing the realization of the right of the Palestinian people to self-determination.”

Amnesty International calls for the investigation of war crimes

The Israeli occupation forces have killed at least 111 Palestinians since the start of 2022, 26 of whom were children. In a raid on October 24, Israeli forces killed 5 Palestinians in the West Bank city of Nablus, injuring 20 others, in what has become a daily occurrence for Palestinians.

In the meantime, Amnesty International has called for opening an investigation into possible war crimes committed by Israel during its August 2022 offensive on Gaza. “Israel’s latest offensive on Gaza lasted only three days, but that was ample time to unleash fresh trauma and destruction on the besieged population,” said Agnès Callamard, Secretary General of Amnesty International.

Whether the international community will take action to end Israel’s violations against the Palestinians remains to be seen.

It is only a matter of time before the international community will take action to end Israel’s violations against the Palestinians.