Trump is factually wrong, clearly xenophobic and dysfunctional policy-wise. These facts, on the other hand, should not suggest that Hillary Clinton, the Democrat Party’s nominee for President, is as pure as the driven snow in terms of Islamophobia. 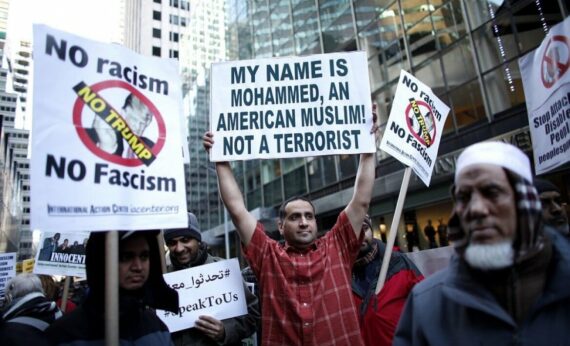 “Give me your tired, your poor, your huddled masses yearning to breathe free, the wretched refuse of your teeming shore. Send these, the homeless, tempest-tossed to me, I lift my lamp beside the golden door!” say the last lines of The New Colossus sonnet, mounted on a plaque on the Statue of Liberty. The statue has welcomed millions of immigrants who arrived aboard ships at nearby Ellis Island, the first federal immigration station of the US. From its very early days, the US has been a nation of immigrants. Setting aside certain turbulent and chaotic times of its immigration history, the US has bragged about having one of the most diverse populations in the world, and the mixed ethnicities and backgrounds of many of its people are said to “make America great.”

WorldBy Fahri Yavuz
We see, however, from the 2016 election rallies that the situation is not exactly what it looks like, as politicians resort to a strategy of blaming Muslims for the problems of the country, and this strategy gains acceptance from a large portion of the society.To give an example, Donald Trump, the Republican Party nominee for President of the United States, has become known for his xenophobic, racist and anti-Islamic statements. His campaign slogan “Make America Great Again,” which might seem promising and alluring at first, bears deep and terrifying meanings when examined closely. He aims to “make America great again” by not allowing Muslims to enter the US, building a 1,000-mile wall along the US-Mexico border, and deporting the estimated 11 million illegal immigrants in the country.

While defending his isolationist closed-border policy, Trump uses hate-filled language in his campaign speeches and presidential debates. He blames all Muslims and Islam itself for the attacks made by some radical people; he uses debunked examples to support his ideas, and thus, his anti-Muslim rhetoric fuels Islamophobia. Unfortunately, political rhetoric has long-term effects on the society regardless of who wins the election.

A more disturbing and alarming part of the story, in fact, is that Islamophobia in the US didn’t start with Trump. Having realized that it has been one of the biggest racist issues in the US for years, Trump, with the purpose of coming to power, uses bigoted statements against Muslims on purpose to tap into a nationalist fear among Americans, which has been perpetuated by media coverage, Hollywood movies, and popular culture for the last few decades.

Media coverage in particular has played a huge role in profiling Muslims negatively in the minds of American people. According to a study by 416Labs, a Toronto-based consulting company that provides analysis and data on challenges faced by the international community, The New York Times has portrayed Islam and Muslims more negatively than cancer, alcohol and cocaine in the last 25 years. The same study also showed that there is no single positive word in the top 25 associations with Islam.

The New York Times has portrayed Islam and Muslims more negatively than cancer, alcohol and cocaine in the last 25 years. The same study also showed that there is no single positive word in the top 25 associations with Islam.

It is not only the media which contribute to hatred against Muslims. There are numerous Hollywood movies and popular culture elements which depict Muslims as savages bereft of humanity and civilization. People who have been exposed to this news, TV shows, movies and books develop a negative profile about Islam and Muslims that lasts for a long time, and start to believe what they see and read, which causes an avalanche of hate and threats against Muslims.

While the media has always fed this fear, politicians have mischievously attempted to exploit it to gain power among nationalist Americans. That is why the profile of the Muslims that is drawn in public today is triggering a surge of Islamophobia.

The number of Muslims who have recently immigrated to the US increased rapidly because of social and political issues in Middle East. Media coverage, meanwhile, has infiltrated into the subconscious of the American people and helped normalize Islamophobic attitudes. Like other politicians in their own times, Trump, who favors personality over policy, aims to get the attention of the American public by addressing their fears and scapegoating Muslims for the problems in the country.

Here are some of his anti-Muslim statements that he has used deliberately and methodically during his election campaign.

In December 2015, Trump called for a “total and complete shutdown of Muslims entering the US until our country’s representatives can figure out what is going on.” Upon severe criticism, he attempted to step back from his statement, but Trump made another misstep. As he put it, this policy would “not apply to people living in the country, except we have to be vigilant.” In other words, he suggests the US has to be “vigilant” about all Muslims entering the country and living in the country. This kind of policy brings all Muslims under suspicion solely based on their religious belief.

As another example, shortly after the November 2015 terrorist attacks in Paris, Trump said that the US government should close mosques where “some bad things are happening.” Moreover, he said that he would implement a database that requires Muslim-Americans to register and mandate that they carry special identification cards which note their faith.

Everyone wants to live in a secure and safe world, but trying to win the elections by scapegoating one group of people in the country and resorting to scare-mongering and deception is a slippery slope and a dangerous game.

Recent research has shown that Trump’s Islamophobic rhetoric is causing a drastic rise in the rate of hate crimes against Muslims, because people who take courage from him as a nominee for President of the US are now feel brave enough to be offensive in what they say and how they behave.

According to the report “When Islamophobia Turns Violent: The 2016 U.S. Presidential Elections,” released by Georgetown University, the first rise in anti-Muslim political rhetoric was observed in September 2015, when the Syrian refugee crisis hit the news media headlines in the US. The same report shows that after Trump made Islamophobic statements on mainstream news media outlets that November, anti-Muslim attacks picked up dramatically, and in December 2015 occurred almost daily and often multiple times a day. Surprisingly – but not surprisingly – at least three separate anti-Muslim attacks involved public supporters of Trump.

Blaming Muslim people and using anti-Muslim rhetoric deliberately and methodically will not solve any problem. On the contrary, it will increase hate crimes against Muslims and divide the country.

Muslim countries and Muslims suffer the most, by far, from attacks by radical Islamists. And in fact, anyone with common sense knows that blaming all Muslims for the acts and attacks of a group of radical people is not rational and acceptable, but still it is a game manipulated by politicians looking for an electoral victory.

Trump is factually wrong, clearly xenophobic and dysfunctional policy-wise. These facts, on the other hand, should not suggest that Hillary Clinton, the Democrat Party’s nominee for President, is as pure as the driven snow in terms of Islamophobia.

So here are the options for Muslims who will vote on November 8: Donald Trump, who uses Islamophobic rhetoric that spurs an increasingly higher rate of crimes against Muslims in the country, and Hillary Clinton who is known for her hawkish foreign policies towards Muslim majority countries.

Maybe she is denouncing Trump for his xenophobic speeches and not resorting to an anti-Muslim rhetoric during her campaign rallies, but as a politician who has served for various high-profile political offices for a long time, Hillary has a bad reputation with Muslim countries.

She was one of the leading figures who advocated for catastrophic military decisions by the US in Muslim majority countries, including Iraq, Afghanistan, Libya and Syria. Moreover, she has an “unbreakable bond” with Israel, as she wrote in a November 2015 op-ed titled “How I Would Reaffirm Unbreakable Bond With Israel – and Benjamin Netanyahu.” In addition, on her official website she has a special section dedicated to Israel with the header of “Hillary Clinton and Israel: a 30-Year Record of Friendship, Leadership and Strength.” She openly criticizes the United Nations for its votes against Israel, which has been committing crimes and carrying out apartheid policies towards the Palestinians, and says that she will increase the military budget for Israel if she becomes President. Last but not least, while she is blaming Trump for being racist and Islamophobic, she retains General Wesley Clark as one of her campaign surrogates, a man who has called to “segregate” “radical” Muslims from society.

So here are the options for Muslims who will vote on November 8: Donald Trump, who uses Islamophobic rhetoric that spurs an increasingly higher rate of crimes against Muslims in the country, and Hillary Clinton who is known for her hawkish foreign policies towards Muslim majority countries.

There is two urgent questions to be asked here.

No matter who wins this election, how difficult will it be to live safely and peacefully in the US for Muslims considering anti-Islam rhetoric has been propagated so widely public? And how can this fertile ground for threats and acts of anti-Muslim violence, which was laid before elections and heavily nurtured during the campaign, be countered and eradicated from the minds of people?

While looking for answers to these questions, it should be kept in mind that even if (and hopefully when) Muslims gain acceptance in the American culture someday, this dirty game that politicians and media played in a hand-in-glove relationship will take its place in history among other unjust and repugnant stories of the treatment of immigrants.