Debates Heat Up As Iranians Elect Their New President

Many Iranians believe that the outcome of today’s elections is already fixed. This is a major blow to the republican nature of Iran’s political system. 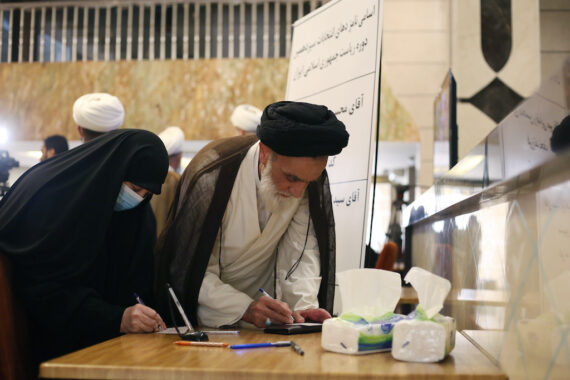 Today, June 18, a 59,310,307-strong Iranian electorate, including 1,392,148 new voters, are voting to elect their eighth president. Although there are many uncertainties and problems awaiting Iran in domestic and foreign politics, it is almost certain that Sayyid Ebrahim Raisi, a conservative cleric who has spent most of his career in judicial posts and serves as the head of Iran’s judiciary since 2019, will be the country’s new president. Raisi’s first bid for presidency was in the last presidential elections in 2017 against Rouhani.

Although Rouhani won the elections by a landslide victory (57.14%), Raisi’s 38.28% wasn’t negligible either. Unsurprisingly Raisi has been given a second chance to run for president but this time in a well-engineered election which, some of the critics say, is “stage-managed.” For this, they blame the Guardian Council whose long record of election-engineering has a very bad reputation.

Although, from a technical point of view, Iran has a well-functioning electoral system, the disqualifications by the country’s election watchdog always create a problem. As in every election, the council once again disqualified many potential candidates, including some of the most influential figures. Although as many as 592 people applied for candidacy, on May 17, the council shortened the list of potential candidates to 40. Then, on May 25, only seven candidates were allowed to run for president.

Read: Change Is Inevitable in Iran: How the Four-Decade-Old System Has Become Outdated

Iran’s ruling establishment did everything possible to fix a safe victory for Raisi for internal and external reasons.

Two of the conservative candidates, Saeed Jalili and Alireza Zakani, withdrew from the elections along with the reformist Mohsen Mehralizadeh. In a word, Iran’s ruling establishment did everything possible to fix a safe victory for Raisi for internal and external reasons.

Iran is led by 82-year-old Ali Khamenei, the country’s supreme leader, and there are different scenarios for the post-Khamenei period where Raisi has a key role. Khamenei became Iran’s president when he succeeded Ayatollah Khomeini in 1989, and some believe that his past can be Raisi’s future. A successful presidential term can help introduce Raisi to the Iranian public.

At the same time and importantly, Raisi is accused of an alleged role in the mass executions of opposition prisoners – mostly suspected members of the proscribed People’s Mujahedin Organization of Iran – in the late 1980s, and was put on the list of the sanctioned Iranian officials by the U.S. in November 2019 due to alleged human rights abuses.

Raisi is also sanctioned by the European Union. But inside the country, he casts himself as an austere figure and an anti-corruption champion of the poor, and makes repeated promises to battle unrelentingly against poverty and corruption. Given Iran’s economic problems, which worsened by the COVID-19 pandemic, and the depressing pressure on low-income Iranians, it is no wonder that people are paying a lot of attention to the economic promises.

Apparently, the Iranian regime believes that a good part of the public is ready to compromise their democratic rights to ease the economic pressure on the country. This can work in the short run. Nevertheless, democratic practices will decide the fate of the country in one way or another, and Raisi’s election will have more than domestic consequences.

Iran urgently needs to reach a common ground in the ongoing bilateral negotiations with the U.S. in Vienna in order to have the sanctions lifted. Trump’s sanctions, which he imposed on Iran following his withdrawal from the nuclear deal in May 2018, have brought Iran to its knees. Although the two countries, along with China, Russia, the United Kingdom, France, and Germany which still stick to the deal, will obviously reach an agreement, the management of the negotiation process by Iran is less obvious.

The difficulty lies in making a face-saving deal without giving the image of compromising against “the enemy,” to wit the U.S., which conservatives accuse the Rouhani government of doing. But this is easier said than done considering the U.S. insistence on bringing Iran’s missile program to the negotiation table.

The same holds true for Iran’s relations with China. In March 2021, Iranian Foreign Minister Mohammad Javad Zarif and his Chinese counterpart Wang Yi signed a road map in Tehran for a “25-year strategic cooperation pact” which would enhance bilateral cooperation between China and Iran in various fields. It is now up to the next Iranian government to negotiate this road map and turn it into a practical deal.

VIDEO: One on One – Former Iranian President Mahmoud Ahmadinejad

In the meantime, the new Iranian president will also have to attend to regional issues that are of concern to Iran, particularly Afghanistan, Iraq, Yemen, and Syria. Although laying down and revising the guiding principles of Iran’s foreign policy are prerogatives of the supreme leader, who makes up his mind after a series of complex consultations with certain official bodies and figures, their realization is carried out by the government. There are advantages and disadvantages for Iran in each of these regional issues, but given the growing regional pressure, there is no more time to lose.

The future of Turkey-Iran relations is important to mention. Although the economic relations between the two countries have never reached the expected levels, Iran is a principal energy supplier for Turkey whereas Iran imports a lot of Turkish goods. However, political relations are rather tense. Turkey’s frustration stemming from Rouhani’s reluctance to reach a reasonable and sustainable solution to the Syrian crisis is not a secret.

Iran’s position on Turkey’s fight against PKK-PYD terror has been even more disheartening. So, the elections come at a critical juncture in the bilateral relations. It would be misleading to expect Raisi to follow entirely different policies vis-à-vis Turkey, but a conservative Iranian government is more encouraging to talk real business.

It is too early to say whether the talks will produce any tangible outcomes. But the current circumstances make it impossible to have a problem-free scenario in the future. The two countries will either improve their mutual understanding and cooperation in Iraq and Syria or will look to other partners. Thus, Turkey is one of the countries which follows the Iranian elections closely.

A young and “Hezbollahi” government?

Over the last years, Khamenei has repeatedly voiced his call for a “young and hezbollahi government” which would be energetic and uncompromising against the enemy. Raisi meets the criteria outlined by Iran’s supreme leader. The 60-year-old candidate is a relatively young figure as far as the average age in the highest echelons of Iranian politics is concerned. In Raisi, Khamenei might be seeing his prince. Of the four presidents who have served under him, Akbar Hashemi Rafsanjani (1989-1997) was more of a rival than an ally while Mohammad Khatami (1997-2005) proved to be a very risky adventurer who could shake the foundations of the regime along with his circle, which some fear.

Mahmoud Ahmadinejad (2005-2013) was, at least in the beginning of his presidency, no less conservative and loyal to the supreme leader than Raisi, but he was too self-confident and self-ordained to be welcomed into Khamenei’s close circle. As for Rouhani (2013-2021), his eight years in office have been anything but trust-building from Khamenei’s perspective.

Many Iranians believe that the outcome of today’s elections is already fixed. This explains why the turnout is expected to be very low. Obviously, this is a major blow to the republican nature of Iran’s political system. Even is the ruling establishment does not care about this now, it will have to do so in the foreseeable future. Iran’s assertive social dynamics renders it impossible to think otherwise.