When the international responses to the democracy-suspending coups staged throughout Turkey's political history are considered, the initial silence of the Western democracies in the face of the July 15 attempted coup makes more sense. 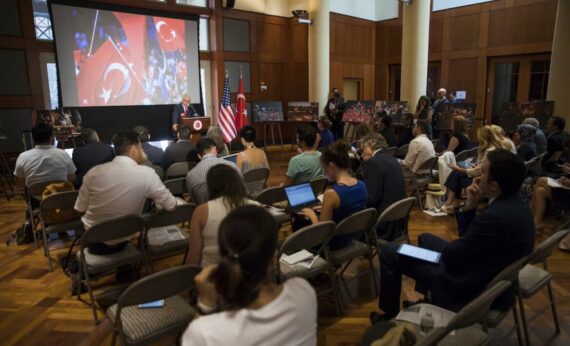 When the international responses to the democracy-suspending coups staged throughout Turkey’s political history are considered, the initial silence of the Western democracies in the face of the July 15 attempted coup makes more sense. Particularly in the context of the coups staged in May 27, 1960, March 12, 1971 and September 12, 1980, the policies adopted by the Western democracies stand out as evidence proving that they were defeated by the pragmatism of liberal democracy’s rhetoric of values.

In the aftermath of the 1960 coup, a number of prominent Western media outlets including New York Times, Le Monde, Wall Street Journal, Time, Die Welt, and BBC endeavored to convince their audience to the notion that the coup could be justified for some reasons while encouraging their governments to get in contact with the putschists.

Undeniably, the Turkish intelligentsia who were alienated from their own values and disturbed by then Prime Minister Adnan Menderes and ruling Democrat Party (DP) also contributed to such reflections of the coup in the Western media. Having received a negative response only from the French government among the European countries, the putschists achieved to make themselves accepted in the international arena with the support of the U.S. While Turkey’s dialogue with the European Community (EC) went on following the coup, the pro-Western statements of the putschists regarding NATO and the EC sufficed to convince the Western public opinion.

The West’s efforts to develop ties with the junta by condoning and almost affirming the 1960 coup also fomented the following coups. From 1960 to the end of the Cold War, the coup plotters did not confront any problem of legitimacy in the international arena due to the U.S.’s containment policy towards Russia and strategy of keeping Turkey by its side. Except for some weak protests, tepid condemnations and exceptional and insubstantial sanctions, the juntas in Turkey have always been affirmed by the Western liberal democracies.

Right after the first post-coup contact between then U.S. Ambassador to Turkey Fletcher Warren and the 1960 coup leader Cemal Gürsel, Washington provided financial aid to the junta, which pointed to the hasty demeanor of the U.S. Besides, barely two months passed since the 1960 coup when the U.S. deployed Jupiter ballistic missiles in Turkey against Russia, which was another sign of the volition of cooperation between the junta and the U.S. government.

The U.S. government’s approach to the 1960 coup in Turkey shows a great parallelism with the Obama administration’s approach to the 2013 Egyptian coup staged by Abdel Fattah el-Sisi. As can be seen in the coup cases of 1960 Turkey and 2013 Egypt, the first coups staged against the governments formed as a result of free and transparent elections in developing democracies have been accepted as restoration, institutionalization and incorporation of democracy by the U.S. All kinds of support have been provided to military junta regimes including international recognition and financial aid.

The coup on March 12, 1971 was staged shortly after the White House exerted pressures on Süleyman Demirel’s government with regard to opium production, which showed that the approach of the U.S. to the 1960 coup was carried one step further. The junta administration chaired by Nihat Erim, who was assigned by the putschists, won the approval of Washington by banning opium production as requested by the U.S. In so doing, the junta gained legitimacy in the West.

As for the coup staged on September 12, 1980, no change was observed in the approaches of the U.S. and other Western democracies to the junta. It is a widely known anecdote that then CIA station chief in Turkey Paul B. Henze was rumored to have said: “Our boys have done it,” to then U.S. President Jimmy Carter while mentioning the 1980 coup. Although Henze denied saying so after 27 years from the incident in an attempt to recover his public image as a coup advocate, it is a general acceptance among political observers that the White House played a role in the 1980 coup. In view of the increasing influence of Russia in the region after the coup, a strategy was adopted to consolidate Turkey’s position as a U.S. ally.

The U.S.’s supportive attitude to the coups in Turkey has been a determinant in the international arena. Being aware of this factor, the coup plotters endeavored to receive the U.S. support before or during their coup attempts.

Therefore, the U.S. approach to the July 15 coup attempt is required to be examined in detail.

US Response to July 15 Coup Attempt

In the night of July 15, 2016, when it was understood that the military troops’ presence on the streets signalized a coup attempt, the first statement from the U.S. was issued by then Secretary of State John Kerry, who was in Russia in the meantime. After Turkish Prime Minister Binali Yıldırım spoke to a live TV broadcast at 11.05 p.m. and stated that there was a military insurrection that would not be allowed by the government, Kerry said at 11.57 p.m.: “I hope there will be stability and peace and continuity within Turkey.”

Stating that he was not informed on what exactly was happening in Turkey, Kerry chose not to articulate any expression showing support to the democratically elected government. While Kerry was issuing this statement, international TV stations had already begun to announce that a coup was being staged in Turkey. During the moments when the coup attempters shot and killed civilians, the U.S. administration continued to watch the incidents in a complete silence.

Retreating into silence and searching for a new position following Kerry’s “peace, stability and continuity” message, the U.S. gave the impression that they were disappointed since the “peace, stability and continuity” message that was issued at 11.57 p.m. would have meant something had the coup attempt succeeded. The timing of this message, which was issued while the elected government was not yet suppressed by the putschists and the government authorities kept resisting, passed into the history of U.S. diplomacy and democracy as a disgrace.

While Kerry’s statement encouraged the coup attempters even more, a number of senior diplomats representing Turkey called their counterparts at the U.S. Embassy and the White House to point out that such a statement was unacceptable. Highlighting that this statement of Washington, which did not give any support to the government, could be read as a support to the coup plotters, they asked the U.S. government to issue a statement siding with democracy.

In the statements, he issued to the international media outlets, Presidential Spokesperson İbrahim Kalın called the allies of Turkey to stand up against the coup attempt. Yet, those calls were not adequately answered by the U.S. administration.

At 12.13 a.m. in that night, a declaration by pro-coup soldiers was read at the TRT, claiming they had taken control of the country. The declaration stressed on the relations with NATO and reassured about the duties and commitments as part of the NATO alliance. The U.S. gave its next response when the TRT was taken over by the putschists.

The statement made on the White House’s official Twitter account only expressed that the incidents in Turkey were closely followed and President Obama was informed on the subject. It was 12.17 a.m. when the White House issued this statement. Only six minutes after this statement, a substantial move that turned the tables came from President Erdoğan. At 12.26 a.m., Erdoğan called people to take to the streets and resist the coup attempt. Upon that, people started pouring into streets to defy the insurrection, which was not foreseen by the coup plotters.

Within minutes, the putschists began to retreat in the face of the determined resistance of citizens. As from 02.00 a.m., the pro-coup troops were started to be detained. The first supportive statement from the U.S. was issued when it became obvious that the coup attempt would be foiled. At 02.05 a.m., the White House called authorities to support the elected government. But the word “coup” was abstained in the statement.

The U.S. only took a clear stance upon the failure of the coup attempt. Kerry stated on July 16 that he had a phone conversation with Turkish Foreign Minister Mevlüt Çavuşoğlu, adding that the U.S. provided full support to the democratically elected government and its democratic establishments. The U.S. officials preferred to issue statements that were supportive of the elected government by abstaining from using the word “coup”.

Given that the U.S. had also refused to call the Egyptian coup a coup, Washington gave the initial signals that they would adopt a strategy similar to their stance on the Egyptian coup with regard to the July 15. On July 24, 2016, U.S. Vice President Joe Biden paid a visit to Turkey to restore the damage of the policy Washington adopted in the coup night. Expressing that he stands for democracy and admires the resistance of Turkish people, Biden remarked that he was moved by the leadership and courage displayed by President Erdoğan during the night of the coup attempt.

During his visit, Biden underscored several times that the U.S. did not side with the coup, which might mean that the White House felt an embarrassment over its reticence in the night of July 15. The U.S. Vice President’s remarks that condemned the coup attempt and praised the resistance for democracy will pass into the history of Turkey-U.S. relations as trivia. On the other hand, Washington’s first statement during the night of the coup attempt will always be remembered: “We hope stability and peace and continuity.”