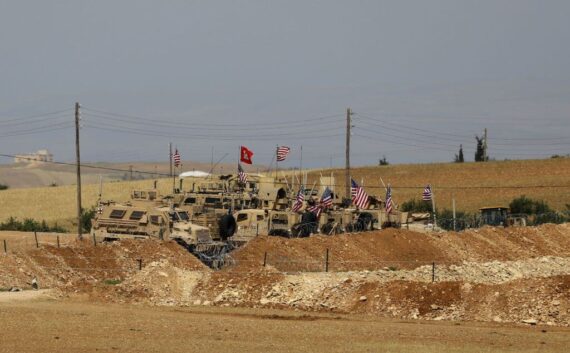 A picture taken on May 8, 2018 shows vehicles of the US-backed coalition forces in the northern Syrian town of Manbij. Getty Images

While Turkey is focusing on the local elections that will take place on March 31, certain foreign policy developments are continuing to dominate Turkey’s agenda. Syria is still at the center of Turkey’s foreign policy agenda. However, it is best to lower the expectations for Syria particularly in the context of the U.S. withdrawal. Every player in Syria has its account, priorities and game plan. Turkey, Russia, Iran, and the U.S. are the main actors that can make an impact on the ground, but their agendas and priorities certainly differ from one another, not only towards some specific issues in Syria but also against each other. Turkey’s position is exceptional in this regard as Ankara has to deal with two major interrelated problems, simultaneously.

First and foremost, the PKK issue is still the primary concern of Turkey. Ankara was able to eliminate the PKK threat through Operation Olive Branch and Euphrates Shield in the western part of the river. However, the threat emanating from the PKK is remaining in the eastern part of the river. There is a clear strategic objective of Turkey to eliminate the PKK’s military, political, economic and even territorial power. However, the problem for Turkey is that the PKK is not only an issue between Turkey and the PKK, rather it has been gradually becoming a geopolitical antagonism between Ankara and Washington. Therefore, each time Turkey has to consider its strategy of engagement against the PKK in Syria by taking into consideration the U.S.

The problem for Turkey is that the PKK is not only an issue between Turkey and the PKK, but rather a geopolitical antagonism between Ankara and Washington.

More than two months after the withdrawal decision, it is still unclear what kind of order will be established in the east of Euphrates after the U.S. withdrawal. There are three ways for the United States. The first one is to make a deal between Turkey and the U.S. on establishing a safe zone alongside Turkey’s Syrian border under the control of the Turkish Military Force and Turkey-backed military groups. For sure, the U.S. wants to establish a mechanism to ensure that the PYD-YPG is protected by a small international protection force by creating other safe areas where the PYD can survive. With this plan, the U.S. wants to satisfy both Turkey and the PYD at the same time. One of the primary strategic goals of the U.S. in this context is to promote a “dialogue” between Turkey and the PKK if Turkey accepts a safe zone in which the PYD will be protected, as well. However, it is well known that this offer is not accepted by Turkey.

The second way for the U.S. is to establish an order based on SDG areas outside the safe zone. It doesn’t have to be under the name of SDG. This order consists of three pillars: political, economic and military (security). In other words, in the long term, the U.S. wants to establish a governmental structure consisting of Kurdish, Arab and other ethnic elements with a strong autonomy. The only thing that the U.S. cannot trust in the long term is the Arab community. For the U.S. it is not clear whether the Arab communities, especially the major tribal ones, will accept to share the power with PYD-YPG, as it would make them lose their geopolitical superiority over the Turkish-initiated safe zone.

The third way can be more complicated and costly for the U.S. A group from the Pentagon and State Department think that the YPG should completely eliminate Turkey’s safe zone proposal by coming to terms with the Syrian regime in one way or another. For this purpose, the U.S. is carrying out negotiations with both Russia and the Syrian regime. So, the essence of the work is that on the one hand, the United States is carrying out an intense negotiation process with Ankara while keeping in touch with all the other actors involved in the case. The fact that CENTCOM’s top official, Votel, has been communicating with Mazlum Kobani, one of Turkey’s red-listed PKK’s ground leaders, proves this point.

Of course, in such a scenario, it is quite clear that Russia constitutes the main target actor to be negotiated. However, it is hardly possible for Russia to trust a process carried out by the U.S. On the other hand, Turkey is reluctant when it comes to U.S. premises. The fact that the negotiations on the safe zone has been taking more time than wanted is putting pressure on Turkey instead of enabling the country to save time.

The U.S.’s core objective in the negotiation process is not to withdraw from Syria after forming a safe zone as Turkey wishes. In fact, the U.S. wants to appease Turkey via the negotiation process to gain time. In this case, Turkey needs to create its own options. Turkey may be forced to create a ground plan for itself eventually, which makes the “first act then deal” mindset one of Turkey’s policy options. Besides that, the idea of ​​including Russia in the process towards the east of the Euphrates should not be underestimated. This also seems to be related to the process in Idlib soon.

For Idlib, the formula is simple: strengthen moderate opposition, oppress and persuade HTS for a solution. At the end of the day, no other state but Turkey has serious plans for the east of the Euphrates.

These two issues are directly impacting Turkey’s policy options. How the Idlib issue is going to be resolved remains unclear despite that Turkey has gained time via the Sochi Summit. Idlib offers significant opportunities for Turkey, but also contains the risk of turning into a problem. First of all, Russia is creating pressure on Turkey through Idlib. Moscow’s “either resolve it or consent to an operation” policy has impacted Turkey’s negotiation process with the U.S. unavoidably.

In sum, Turkey can provide rapid progress in both if it can create a de facto situation both in Idlib and in the east of the Euphrates by taking more initiative and producing authentic solutions. For Idlib, the formula is actually to strengthen moderate opposition, oppress and persuade HTS for a solution process! At the end of the day, it is clear that no other state but Turkey has serious plans for the east of the Euphrates.