Trump's warmongers are pressing harder for a military conflict between the U.S. and Iran. U.S. officials have increasingly articulated the possibility of war. 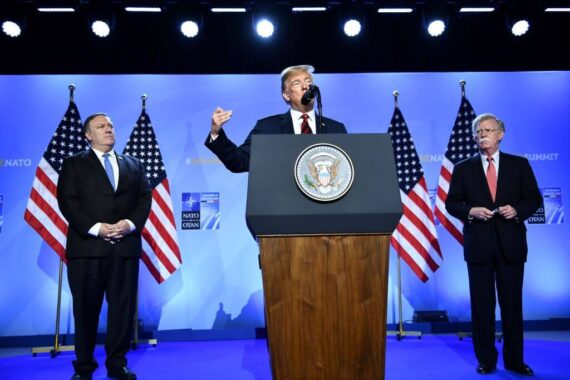 US President Donald Trump (C) is accompanied by US Secretary of State Mike Pompeo (L) and US National Security Advisor John Bolton (R) as he addresses a press conference on the second day of the North Atlantic Treaty Organization (NATO) summit in Brussels on July 12, 2018. Getty Images

Sixteen years after the Iraq war, the U.S. seems to prepare a large-scale military intervention against Iran. The military presence of the U.S. is increasing in the region while the officials talk more about the possibility of war. On the other hand, some reports are suggesting that Iran is also making military preparations for a direct or proxy war. This advancement comes after a series of developments which pit two countries against each other. On April 8, U.S. Secretary of State Mike Pompeo announced that the State Department designated the Iranian Revolutionary Guards Corps as a terrorist entity. Iranian authorities immediately responded to the decision by listing CENTCOM as a terrorist organization. These reciprocal moves opened room for military escalation in different parts of the Middle East where the two forces can confront each other head to head.

Additionally, as of May 2, the U.S. removed its waivers on 8 countries buying oil from Iran. The Iranian side has also not been inactive. Exactly one year after Trump’s withdrawal from the nuclear deal, Iranian President Hassan Rouhani expressed their dissatisfaction with the EU’s performance regarding the JCPOA. Rouhani announced that Iran has temporarily suspended some of its commitments under the JCPOA, and the EU has 60 days ahead of it to take necessary steps. The EU responded with discontent and declared that they reject the 60 days ultimatum. Therefore, Iran was deprived of EU support against the U.S.

The more the tension between Iran and the U.S. increases, the more military preparations gain momentum.

The more the tension between Iran and the U.S. increases, the more military preparations gain momentum. As a military precaution against Iran’s potential moves, USS Abraham Lincoln aircraft carrier strike group has been sent to the Gulf along with four B-52 bombers, amphibious warship USS Arlington (LPD-24) and a patriot missile battery. White House Security Adviser John Bolton explained the rationale behind this move as “to send a clear and unmistakable message to the Iranian regime that any attack on United States interests or on those of our allies will be met with unrelenting force.” Furthermore, the New York Times reported that the U.S. has the intention of sending 120,000 troops to the Gulf. This large number of military personnel reminds us of the 2003 Iraq invasion disconcertingly. The report then was denied by Trump himself. He said he would have done that if they had planned to do so. Nonetheless, the denial speaks for itself, showing that senior officials have seriously considered these kinds of plans.

When the atmosphere is tense enough, it takes a simple mistake or an accident to start a war. On May 12, two Saudi owned oil tankers were attacked near the port of the Fujairah in the UAE. “An attack on two Saudi oil tankers is an attack on all Americans,” said Bolton after the Fujairah attack. This quote shows Bolton’s clear intention to extract a legitimate justification for any military engagement against Iran from this incident. Trump also commented on the attack and said, “It’s going to be a bad problem for Iran if something happens, I can tell you that. They’re not going to be happy.” However, it is not clear yet who was behind the attack. While an anonymous U.S. official says first findings indicate Iran as responsible, Iranian Foreign Ministry Spokesman Abbas Mousavi said that the Fujairah incident should not be used as an excuse for “adventurism by foreign agents.”

U.S. activities against Iran and reports that the Trump administration sent 120,000 troops to the Gulf reminds us of the 2003 Iraq invasion.

Two days after the tanker attack, Yemen’s Houthi rebels performed a drone strike on Saudi Arabia’s oil pipelines and caused severe damage. According to Saudi sources, two of the oil pumping stations suffered from the attack. As a result, the Saudi owned Aramco stopped pumping oil temporarily. Although this attack was part of an ongoing war between the Saudi forces and Houthi rebels, recent developments in the region help hawks to put Iran in the context. Iran’s support for Houthi rebels also facilitates the possibility to associate the attack with Iran. Moreover, Iran’s threats of closing the Hormuz Strait gives a useful pretext for belligerent actors since both the Fujairah port and the attacked Saudi oil facility offer alternative sources for Iranian oil.

The possibility of a US-Iran war

Trump’s warmongers are pressing harder for a military conflict between the U.S. and Iran. U.S. officials have increasingly articulated the possibility of war. For instance, U.S. Senator for Arkansas Tom Cotton stated, they would win with “two strikes,” if they fought Iran, “the first strike, and the last strike.” However, there must be a distinction between Trump’s businessman mentality and his hawkish teams’ aspirations towards war. Yet, some reports indicate that Trump is not happy with Pompeo and Bolton’s efforts to start a war. He is not convinced with the reasons why the U.S. should attack Iran and is not convinced as to whether it will work out well – if it happens.

Yet, some reports indicate that Trump is not happy with Pompeo and Bolton’s efforts to start a war with Iran.

Given that Trump’s Iran strategy is based on increasing pressure on Iran, the country will see no way out other than re-negotiating with the U.S. This pressure would compel Iran to content with another deal favoring the U.S. more than the previous one. Trump does not hide his intention of new negotiations with Iran. However, a war with Iran would cost Trump heavily. It rules out any possibility for a new deal. In addition to that, fighting Iran would be different than with Iraq in terms of economic burden, human costs, duration, and political outcomes.

The U.S. public has already started a “no war with Iran” campaign and Democrats will surely use this campaign as leverage in the upcoming presidential elections. Fearing of losing its electorate in the 2020 elections, Trump can prevent Pompeo and Bolton from instigating a war with Iran.

Israel, Saudi Arabia, and the UAE are trying to goad the U.S. to “punish” Iran for its “aggressiveness and expansionist policy” in the region. However, war with Iran also contradicts with Trump’s policy that Middle East countries should take care of themselves and his decision to withdraw from Syria.

Rather than a direct military conflict between the US and Iran, a proxy war is more probable. Iraq can be the starting point of that kind of armed conflict.

Rather than a direct military conflict between the two countries, a proxy war is more probable. Iraq can be the starting point of that kind of armed conflict. Iran has a lot of proxy groups operating in Iraq. Hashd al-Shaabi is prominent among them. Hashd al-Shaabi is an umbrella organization which brings together various Shia militia groups. Iran’s Quds Force commander Qasem Soleimani has a considerable influence on the commanders of these groups. There are reports claiming that Iranian military figures told Hashd al-Shaabi to be ready for a proxy war. The Department of State released a travel warning to Iraq on May 15, and it also requested non-emergency U.S. officials to leave the country. In a similar vein, the UK also raised the threat level for its personnel in Iraq on following day.

Nonetheless, there is no guarantee that a small scale proxy war will not turn into a full-fledged war. Even though leaders of both sides are saying that they are not seeking war, the two countries have geared up for military preparations because of the security sensitivity. As long as attacks in the Gulf continue, military escalation will be much higher, and war drums will be heard more clearly.