Young Palestinians firmly believe that the only way out is to take things into their own hands. 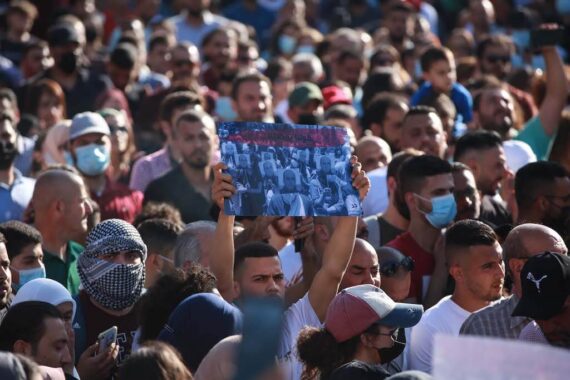 Palestinians protest the death of opposition activist Nizar Benat shortly after he was detained by Palestinian security forces in Ramallah, West Bank on June 26, 2021. Photo by İssam Rimawi. Anadolu Agency.

Most young Palestinians were born after the signing between the Palestine Liberation Organization (PLO) and Israel of the Oslo Accords in the White House in 1993. The agreement was based on the two-state solution paradigm and promised Palestinians peace and a sovereign state; however, the agreement has never materialized. Palestinian intellectuals such as Edward Said, Ibrahim Abu-Lughod, and Walid Khalidi, foresaw that the Oslo Accords were a trap for the PLO, with Said calling it a “second Nakba.”

Long ago young Palestinians lost any hope in the so-called peace process, which served only to marginalize the PLO’s role by creating a Palestinian Authority (PA) that has a limited sovereignty and power, and that would serve as a barrier between them and the Israeli occupation. The Oslo Accords have turned the West Bank and the Gaza Strip from occupied territories to disputed territories. Israel has not stopped building new settlements in the Palestinian territories and the land of the future Palestinian state has shrunk over time, while the number of Israeli settlers in the West Bank has jumped to over half a million.

Young Palestinians have grown up under this reality of Israeli military occupation. Many are stopped at checkpoints, not allowed to travel, detained and tortured, and displaced to make space for new Israeli settlers. They have completely lost hope in the peace process that was meant to lead to the creation of their own state on 22% of British Mandate Palestine.

Read: We Cannot Use Victimhood to Justify Victimizing Others: An Interview with Alice Rothchild on Facing the Israeli Racism in Palestine

Palestinians in Israel are treated as second-class citizens and Israel’s systematic targeting of their presence continues unabated. Palestinians in the West Bank feel that their lands are shrinking and fear for their lives as they are increasingly attacked by Israeli settlers under the protection of Israeli forces.

Moreover, Palestinians in Jerusalem feel strangers in their own city, with Israeli plans underway to displace them in the neighborhoods of Silwan, Sheikh Jarrah, and Batin Al-Hawa. If they are “lucky,” as dozens of instances show, they choose to destroy their houses to avoid paying the high costs imposed by the Israeli municipality to cover the costs of demolition.

Palestinians feel completely lost in this equation, and are losing hope of being able to choose their own leadership and make it more representative of their will.

Palestinians feel completely lost in this equation, and are losing hope of being able to choose their own leadership and make it more representative of their will. Many Palestinians today feel that the PA falls short of adopting a discourse that reflects their visions under Israeli military occupation and apartheid.

Adding salt to injury, the PA, both in the West Bank and the Gaza Strip, has grown more intolerant of critical voices. The recent kidnapping and killing of Palestinian activist Nizar Banat in the West Bank city of Hebron at the hands of Palestinian security forces was the spark that ignited a wave of protests and anger across the West Bank. Banat was known for his direct and very often harsh criticism of the PA and its security collaboration with Israel.

He had been wanted by the PA a few months before a security force stormed the house where he was hiding in Area C of the West Bank, which is under a full Israeli security and administrative control, and which requires an Israeli approval to access. Banat was kidnapped by the security forces and his family says that they beat him to death.

Banat appeared in a video a day before he was killed accusing the PA of approving a deal to exchange an about-to-expire shipment of vaccines with Israel in return for another shipment the PA purchased from Pfizer which was to arrive in Israel in October and November 2021. Under public pressure and criticism, the PA called off the deal, citing the expiration date of the Israeli vaccines.

Mass protests broke out across the West Bank in anger over the murder of Banat. Palestinians, who suffer from Israel’s occupation and fight for their freedom in every possible way, condemned his killing. They took to the streets of Bethlehem, Ramallah, and Hebron calling for accountability. The young Palestinians who took to the streets feel that today the PA is becoming more like an obstacle that separates them from the Israeli occupation.

They believe that there is no need for any Palestinian government that lacks any sovereignty under occupation, and that the situation is no different than handing over the keys to the PA institutions to Israel, the actual sovereign and occupying power. These young Palestinians believe that where there is an occupation, the plan should be liberation rather than statehood.

In the Sheikh Jarrah, Silwan, and Batni Al-Hawa neighborhoods of Jerusalem, Palestinians started organizing themselves to protect their houses from imminent Israeli demolition and their families from being displaced (again).

In light of this reality, the younger generation of Palestinians started defending their homes and towns, and taking matters into their own hands. In the Sheikh Jarrah, Silwan, and Batni Al-Hawa neighborhoods of Jerusalem, Palestinians started organizing themselves to protect their houses from imminent Israeli demolition and their families from being displaced (again). They felt that if there were to wait for the PA and other international parties to intervene, they would likely be displaced before the PA even intervened – as has happened countless times before.

This new approach of facing the occupation forces and using social media to create an international uproar seems to be effective. Recently, Jerusalem was able to present to the world a number of young faces such as Muhammad and Muna Al-Kurd, who made their case clear before the entire world, exposing an Israeli settler named Yaacob Fauci, who took over half of their house and told them on camera, “If I don’t steal it, someone else is gonna steal it.” With pro-Palestinian advocates turning this into an Israeli proverb, his so-called logic describes the life of Palestinians under Israeli military occupation.

In Beita village near Nablus, Israeli settlers built a new settler outpost on the top of Mount Sibeh. Palestinians in the area formed their own guard units, known as Hurras Al-Jabal (Guards of the Mount), in the knowledge that nobody will protect their lands from confiscation. They have imitated a Gaza experience known as Erbak Al-Layli, or the night confusion, where Palestinians use loudspeakers, lights, and fire to pressure Israeli settlers.

Their non-stop 65-day protest every night near Mount Sibeh has proven to be successful. Although they have paid dearly for what they describe as a victory, with five Palestinians killed and hundreds of others from the village injured at the hands of Israeli forces and settlers, they reached an agreement with the Israeli army which entails the settler evacuation from the outpost.

It seems that popular Palestinian resistance against attempts to silence Palestinians is on the rise. What is happening today in Palestine reveals that Palestinians, especially the younger generation, have decided to take initiative without waiting for any other party to act on their behalf.

Palestinians feel that they are suffering more losses on the ground and that the way the Oslo Accords were conceived was intended to keep them strangled and for Israel to have the final say and upper hand. Young Palestinians firmly believe that the only way out is to take things into their own hands and to adopt a discourse that exposes Israel as a settler-colonial country that practices the crime of apartheid against them.

Also Read
“Is It Our Turn to Die?”: Being a Mother in Gaza