What Can the F-35 Crisis Further Lead To?

Turkey’s removal from the F-35 program will not eliminate potential risks by Russia. It will only hamper NATO influence in the region and further deteriorate Turkish-American relations, as part of a lose-lose scenario. 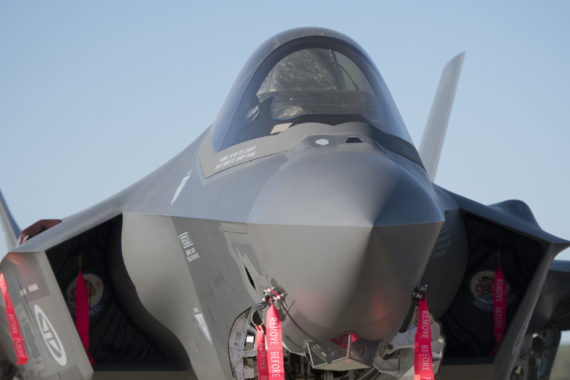 Despite the provisions aimed at preventing Turkey’s procurement of F-35s in H.R. 5515 (National Defense Authorization Act for Fiscal Year 2019), the Pentagon confirmed that Turkey’s first F-35 delivery will take place – as it did – in Fort Worth, Texas on June 21. While it is clear that the U.S. government is employing the F-35 program as political leverage against Ankara, an approved restriction on Turkey’s F-35 procurement process is likely to create a lose-lose situation for both NATO allies, and yield dire consequences for Turkish-American bilateral relations and strategic military partnership in the Middle East.

As put forth in the House bill, the U.S. insists on removing Turkey, a prominent Lockheed partner and NATO ally, from the F-35 program. Turkey’s intention to purchase Russian S-400 air missile defense systems, and the detention of the American pastor, Andrew Brunson,– who has been accused by the Turkish court for serving the Fetullah Terrorist Organization (FETO) following the July 15 coup attempt– are stated to be the major reasons behind the American resentment.

The emergence of terrorist groups such as Daesh and the PYD, and various external threats emanating from the interest of international actors against Turkey’s will in the region have made it necessary for Ankara to obtain air defense systems. The idea of removing Turkey from the F-35 program is hazardous as it will further deteriorate Turkish-American relations, push Turkey towards further cooperation with Russia and discredit American legitimacy on the international arena.

Turkish-American relations have considerably deteriorated due to the U.S.’s encouraging approach towards the PKK/PYD in Syria. Preventing Turkey from procuring F-35s on the eve of a potential political rapprochement over the agreement of Manbij and the FBI-initiated investigation on the FETO case is likely to further damage cooperation between the two NATO allies. By procuring F-35s, Ankara aims to protect Turkish national interests and provide safety in its immediate surroundings, which is not only beneficial for Turkey but also for the NATO alliance.

Turkey has long served as NATO’s Eastern-wing by participating in numerous joint military operations and monitoring tasks, globally. Instead of disqualifying Turkey from the F-35 program, the U.S. should focus on improving military cooperation with Ankara. If the Senate passes H.R.5515 without an amendment to the current provisions against Turkey’s F-35 procurement, Turkey will have no choice but to purchase Russian S-400s to compensate its essential air defense system needs in the short-run. This will also accelerate Ankara’s desire to cooperate with other non-NATO countries in the defense sector.

From a political point of view, the current provisions of the House bill degrade the U.S.’s international legitimacy and trustworthiness, as the pastor Brunson case is a conjuncture and a bilateral issue and has no direct links to the F-35 program. It is, in fact, entirely incidental that pastor Brunson’s case casts a pall on such a crucial military and economic agreement. Turkey is one of the original nine partner countries and has been dedicated to the F-35 program. Currently, Turkey’s industrial participation in the manufacturing and assembly of the F-35 program reaches over $12 billion. The interruption of such a high-volume military project will not only put a severe financial burden on the U.S. but will also slow down the production and procurement processes of the F-35s for the remaining partner countries, undermining the U.S.’s adherence to international commitments. If the U.S. Senate insists on Turkey’s removal from the F-35 program due to the S-400 deal and pastor Brunson case, the ongoing conjunctural issues between the two states are likely to turn into deepened structural crises.

In case of removal, Turkey might rethink its ongoing military commitments involving the Incirlik Air Base. This includes intelligence surveillance, fight against terrorism, and other NATO-affiliated international missions. During the Cold War era, it was understood that military and economic sanctions are not the best strategies to alter Turkey’s independent policies. More importantly, in the presence of the current security issues in the Middle East and other critical regions, such as Eastern Europe, there is a competing geopolitical narrative vis-a-vis Turkey’s strategic importance among U.S. security establishments. This will be the main determining factor in the Pentagon report to the Senate, which will provide a detailed analysis on U.S.-Turkey relations.

It is evident that Turkey’s removal from the F-35 program will not eliminate potential risks by Russia. It will only hamper NATO influence in the region and further deteriorate Turkish-American relations, as part of a lose-lose scenario.