What do the 24 June Election Results Tell Us?

It would not be wrong to state that the main objective of the opposition parties, which was to block Erdogan from winning in the first round and to cause a “divided government” between the legislative and executive branches ultimately ended in a fiasco. 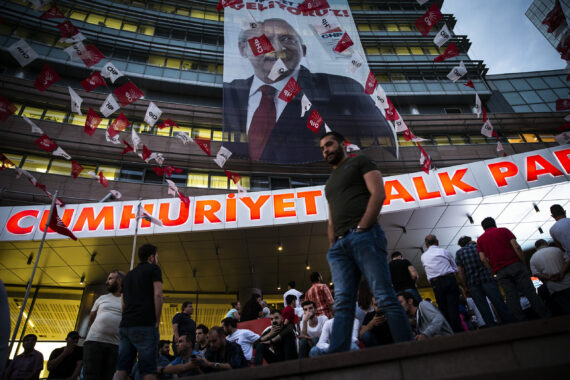 Results of presidential and parliamentary elections being followed by people at the Republican People's Party (CHP) Headquarters in Ankara, Turkey on June 24, 2018. Anadolu Agency

On 24 June, Turkish voters re-elected President Recep Tayyip Erdogan with 52,6 percent of the votes. His closest rival, the CHP’s candidate Muharrem Ince, received only 30,6 of the votes. By this, Erdogan got 11 million votes more than Ince, who consequently congratulated Erdogan on Monday due to his victory. The CHP Chairman Kilicdaroglu, however, rejected to congratulate Erdogan while stating that the AK Party is the loser of the elections. However, in the parliament, the People’s Alliance, which consists of the AK Party and the MHP, received more than 53,6 percent of the votes and thus achieved a majority with 344 seats in the parliament (AK Party 295 seats and MHP 50 seats, of 600). Interestingly, even Erdogan addressed his party’s parliamentary vote by stressing “we got the message,” while on Tuesday, CHP Chairman Kilicdaroglu, with no surprise and as expected, did not step down even though his party’s parliamentary votes decreased from 26 to 22 percent.

It’s perhaps too early to analyze all components of the election results in depth, but it’s quite possible to address some striking issues. First of all, these elections symbolize the ultimate transformation of Turkey’s system of government into a Turkish type of presidential system. The first step had been initiated in 2016 as the AK Party and MHP proposed a constitutional change, which was accepted by a majority in the referendum held on 16 April 2017. Now, the majority of Turks once again voted in favor of the new system by rejecting the opposition parties’ offer to turn back to a parliamentary one.

The majority of Turks once again voted in favor of the new system by rejecting the opposition parties’ offer to turn back to a parliamentary one.

The second striking issue concerns Turkey’s political stability. Apart from the fact that now eventually eight political parties will be represented in the parliament and cause a democratic diversity, the strict division of the executive and legislative branches will not cause any problems for the executive presidency. Furthermore, the fact that the President’s ministers cannot be selected from MPs anymore will cause a rather professionalization of a rapid and effective governmental acting.

The third issue is about the chronic wishful thinking of foreign media representatives. During the recent election period, we witnessed once again that several foreign media outlets disregarded various fact-based issues while supporting above all CHP’s candidate Muharrem Ince and his political campaign. It’s also not a secret that HDP’s candidate Demirtas and recently the Iyi Party’s leader Mrs. Aksener were supported by both foreign media outlets and politicians.

Although Iyi Party entered the parliament, Mrs. Aksener herself, due to not being an elected MP, will be out of the parliament and most probably her leadership will be questioned by other party leaders.

Although Mrs. Aksener’s party entered the parliament, she herself, due to not being an elected MP, will be out of parliament and it is most likely that her party leadership will be questioned by other party leaders. Thus, foreign analysts may also stop trying to manipulate their own audience by disregarding, for instance, populist and baseless statements by Muharrem Ince while permanently promoting him. Turkish voters have rejected populist and anti-refugee statements whereas Western voters increasingly favor similar promises – a fundamental difference between Turkish and Western ways of persuading voters.

The fourth striking phenomenon is about the CHP’s chronic problem; that is to say, its lack of credibility. Even though the CHP tried to build a legal “National Alliance” and a de facto alliance with the HDP, it has been unsuccessful in persuading –in particular– Turkey’s conservative voters. It’s obvious that Turkey’s oldest party will never be as strong as to build the government due to its chronic problem of lacking self-criticism with regard to its radical secular past. If the CHP does not make any self-criticism in various fields there is no possibility to win any general election in Turkey. This has been proved once again.

CHP, Turkey’s oldest party, will never win any general election in Turkey if it does not face its chronic problem that of lacking self-criticism.

By not understanding Turkish voter dynamics and their preferences, it’s useless to count on foreign media support that build on baseless populism. But it seems that in the upcoming days the CHP will face a power struggle in order to elect a new party leader. By this, it’s typical for the CHP, that a person, who lost nine elections within eight years, still insist on the party’s chairmanship while commenting on the party’s presidential partial successful candidate Ince by saying that the voter turnout for him had been “below expectations.”

Turkey has entered a new era with a new system of government. It would not be wrong to state that the main objective of the opposition parties, which was to block Erdogan from winning in the first round and to cause a “divided government” between the legislative and executive branches ultimately ended in a fiasco.