Even if Israel does not reach its ultimate objective, any conflict to emerge between northern Iraqi Kurds and its neighbors will provide Israel with new operation opportunities, as did the post-occupation environment in Iraq. 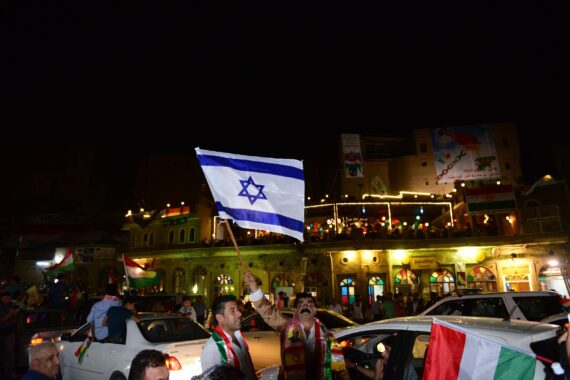 Barzani continues to seek the independence bid he initiated with nationalist and emotional arguments seemingly without any international support, at least on paper. Being one of the actors that has influence over Northern Iraq, the US, initially objecting to the referendum by underlining the timing, demanded it to be cancelled for the preservation of Iraq’s territorial integrity. Iran opposes the division of Iraq, which is already under its zone of influence, is against establishing new relations with northern Iraq and is against the newly formed state becoming an operations center for Israel. Turkey on the other hand is concerned that the post-referendum power-vacuum and instability will both strengthen the PKK and also harm its border security. While the independence initiative has been objected by various states from Europe to the Arab world for different reasons, it received the most open support from Israel.

While Israel backed the independence with both emotional and geopolitical discourses, Northern Iraq’s gratitude to Israel was also note-worthy. Prime Minister Netanyahu stated that he was in favor of the independence of Iraqi Kurds, whom he defined as “Western-oriented, brave and sharing common values.” Later, Ayelet Shaked, deputy of the settlement lobby’s representative Habayit Hayehudi Party and also the acting Minister of Justice expressed that Kurdish independence would be in the interest of Israel. Many articles written by experts in Israel also claimed that independence would benefit Israel.

History of the relations between Iraqi Kurds and Israel

The relations between Iraqi Kurds and Israel is not a new phenomenon. This relationship has both emotional and geopolitical dimensions to it – two factors which have been intertwined in most recent debates surrounding the Kurdish independence vote. Although kept undercover, relations between Israel and Iraqi Kurds go back to the mid-1960s. For years Israel supported Iraqi Kurds against the Saddam Hussein regime by providing military and financial aid. Due to the threat it perceived from Iraq, by utilizing the concept of a common enemy, Israel created a proxy out of northern Iraqi Kurds. While northern Iraq became its intelligence hub, Israel used both its own agents and Iraqi Kurds, who were able to infiltrate Iraq easier, as the main actors of its intelligence activities against Iraq. Before 1979 Israel supported Iraqi Kurds with their joint operations with Iran – namely, until the period up to the Iranian Revolution, an alliance was created between Israel, Iran and the Iraqi Kurds against the Saddam regime. After 1979, however, Israel used Iraqi Kurds as a means of intelligence against Iran. Being close to Iran and maintaining good contact with Iraqi Kurds in general, the northern Iraqi Kurds provided to be a useful partner for Israel against Iran. In other words, directing intelligence operations against Iran and Iraq from northern Iraq, Israel maintained a unique relationship with Kurds for a long period.

The alliance with Iraqi Kurds was actually a part of Ben Gurion’s “Peripheral Doctrine” – which amounted to one of Israel’s most fundamental foreign and strategic policies. Iraqi Kurds were one of the smaller yet prominent partners of this doctrine. As a result of alliances formed with non-Arab groups against common enemies, Israel maintained a close relationship with Kurds, Turkey, Iran and Ethiopia during different periods of time. Maintaining deep relations for a long time with Iran against the Saddam threat, Israel also preserved close military and intelligence relations with Turkey against a perceived common-enemy threat in the Middle East. Reaching its climax during the February 28 Process in 1997, this strategy brought Kurds and Israel closer around the common hostility towards the Saddam regime.

Currently, the idea that an independent “Kurdish state” would prove to be a useful buffer zone and base of operations against Iran is a crucial factor constituting Israel’s support for the independence bid. More precisely, it is observed that independence will institutionalize and guarantee the future of relations between northern Iraq and Israel. However, this thought is problematic due to the fact that Iran maintains a great amount of influence over northern Iraq and will continue to remain one of the most effective actors even in the case of a so-called independence.

This is because neither northern Iraq, Iraq nor Iran maintain the same conditions they did in the 1960s. In contrast to the Saddam era, Iraq and Syria have now become a proxy of Iran, which has allowed the later to expand as far as becoming neighbors with Israel. If the Iran-backed Syrian regime capture Deir ez-Zor, this will enable the rendering of the Tehran-Beirut line by the Iranian supported Shiite militia. In addition, due to the political divisions in the North, Iran has increased its political influence in Iraq. The Goran Movement and the PUK are in a strategic cooperation with Iran and for this reason Israel’s expected intelligence services will be more challenging than expected. Nevertheless, northern Iraq has the ability to provide Israel with geographic, social and political advantages over Iran that no other actor in the region will or is willing to provide. .

The emotional argument “a stateless people having a state” is inspired from the relation between the Jewish people and Israel. Yet this sensuality alone is not enough to explain the harmony between the Kurds and Israel as Israel has a stateless population right beside itself (Palestinians) to whom it denies independence. Besides their Western-oriented appearance, the usefulness of the Kurds (against Iraq and Iran) renders them reputable for Israel. In particular, increasing media attention in the west for the Kurdish fight against Daesh, and once again through the media, being perceived as a secular society increased the positive acceptance of Kurds within the Israeli public. Within its regional strategy, having been the least problematic actor of all that Tel Aviv has worked with is also related to the positive Israeli public perception of Iraqi Kurds. In particular, there is an emphasis on the maintenance of positive relations with Iraqi Kurds even during times when Israel’s relations with Turkey and Iran were tense.

Leaving emotional statements aside, Israel intends to transform northern Iraq into a base of operations against Iran and in particular against Iranian expansionism in the region. Israel’s greatest challenge in this undertaking will be Iran’s increasing influence in the region. Even if Israel does not reach its ultimate objective, any conflict to emerge between northern Iraqi Kurds and its neighbors will provide Israel with new operation opportunities, as did the post-occupation environment in Iraq.